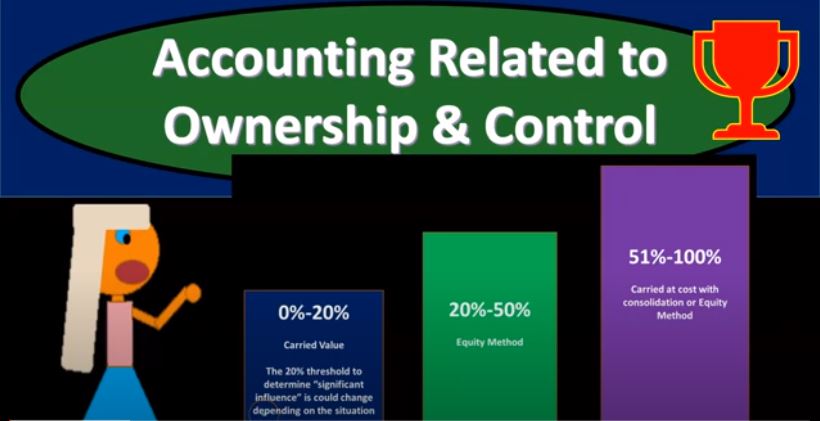 In this presentation, we will take a look at accounting methods which will relate to and depend on ownership and control, get ready to account with advanced financial accounting. Accounting related to ownership and control methods used to account for investments in common stock will depend on the extent of influence or control, the investor can exercise over the investi. So in other words, we’re gonna have different methods depending on the level of control. Now, if we’re going to use different methods, we need to have some kind of definition we need to have some lines in terms of when we’re going to apply these different methods. What does it mean to have different levels of control? And then how do we apply those in practice so we can have some kind of standardization for that.

Typically, we’re going to draw those lines generally with the amount of ownership and then there might be exceptions, in certain cases to those lines in certain cases. So for example, we’re going to say zero to 20% 20 to 50% 51% to 100%. So Let’s start off with zero to 20%. This is what you would think of more similarly to like, if you’re like a normal investor, if you were to invest just individually in the stock market in something like apple, you’re buying Apple stock, Well, clearly you have some ownership because you own the stock, but you don’t really feel like an owner at that case, and you’re gonna, your vote doesn’t feel like you have a whole lot of control better because you don’t write your vote is very small compared to the to the overall vote. But once this percentage gets higher, and then at some point, you’re gonna say, hey, this person’s got kind of control. Now they own a significant amount of voting share of the stock. Well, where is that line? Well, we kind of drew an arbitrary line there. So it’s kind of an arbitrary number. We’re gonna say 20%. We’re gonna say okay, so in the case of one company owning another company, if one company owns more than 20%, we’re going to now say, well, they don’t have a controlling interest, which we’re going to say is over 51%, but they have significant influence. At that point in time, we’re going to say that this has become a significant factor. So from zero to 20%, in general, this is more of a more of a fuzzy line. So there could be other circumstances that take place here that would ensue, would would cause significant influence or not. But in general, we’re going to say if it was over 20%, significant influence.

So under 20%, we’re going to use the carried value. So the 20% threshold to determine significant influence, it could change depending on the situation. So in other words, this is more of a kind of like a fuzzy line. But that’s the general rule where it’s this line of 51% is you would think is applying more often that’s more of a concrete rule, because obviously, if someone has more than 50% of the vote on anything, they have kind of a controlling vote, right? There’s not much question about that generally. So then if you’re over that 20%, line 20% to 50%, then we’re going to be using the equity method, because you have significant influence. So the idea there is that then you’re over the 20%. So you have the influence. You’re not over, you’re not above the 51%. So you don’t have complete control. In other words, someone else can at least tie you on the vote. If you’re at 50, pretty close to 50. The whole everybody else could at least tell you but you have a lot of influence if you’re basically have 50%. If you have 51%, and you’re voting on something, then you win. Right? And so that would be a pretty hard line. If you’re 51. and above, in most cases that you would say all right now you have control. So we’re using the equity method from 20 to 50. Because there’s significant influence we had that significant influence then if you were at 51, if you if you crossed that line 250 1% of ownership, well, now you basically have control you can you can vote for the board, you can vote for you know the management and whatnot and you should be able to exercise control at that point.

So So at that point, we can use the carried at cost with consolidation or equity methods. So we might have a consolidation process that would be would be appropriate and This situation because we have the controlling interest. So lines zero to 20% carried value, you can think of that kind of like you would normally just account for stocks, if you have more of a passive investment, you don’t have a lot of influence. But when you get closer to the 20, that’s more of a fuzzy line, you’re starting to have influence. Therefore, we’re going to change the method to reflect that which is going to be an equity method that’s from that kind of fuzzy line of 20 to 50. And then the 51 which is a pretty hard line that basically says Hey, now you’ve got control, and you may need a consolidation here to reflect that at this point in time, meaning having financial statements combined together, in essence and Peter reflect reflected showing consolidated financial statements. Okay? So security’s carried at fair value. What does that mean? So this is going to be the category that’s going to be from zero to 20%. We don’t have significant influence, we don’t have control so when neither the equity method nor the consolidation are appropriate security are carried at the fair value. So if you’re just normally kind of investing if you’re if you have some investment, that would be a typical kind of investor for most people type of investors or companies that are investing into stocks and it’s not doing so, to basically have significant influence, then you would be using the carried at fair value, then the equity method when investor has significant influence over operating and financial policies of the investi and consolidation is not appropriate, then generally used when a company has 20% or over of the second company’s common stock.

So that’s going to be the equity method here. When we’re thinking about the Advanced Accounting we’re concentrating more on basically equity and and the upper or the consolidated financial statements. So we’re concentrating here on the factors Okay, when are we going to use the equity method and when are we going to be using the consolidation and then we’re going to be jumping in of course, to what kind of what does a consolidation look like? In different kinds of scenarios, that’s going to be where our focus will typically be here. So generally use the equity method, the mid range, generally used when a company has 20% or over of a second company’s common stock. Again, that’s kind of the fuzzy more of a fuzzy line and more of a arbitrary line that they had to draw somewhere. The investment is reported as a line on the invest doors balance sheet. So it’s going to be reported as basically a line item, the income recognized from the investi is reported as a line on the investor’s income statement.

So in other words, the the investor now the person that’s owning the significant influence the over 20% influence, and the investi is now not just going to wait till basically dividends happen in order to record dividend income, as we would do if we were more of a passive investor that doesn’t have the significant influence, but rather think about the actual income that is is generated from the investi the one that we’re investing in that we have more than 20 years. asset ownership in and report on a line item on the income statement, the amount of our portion, in essence of the income that’s being generated from the company that we have a significant over 20%, usually ownership in consolidation, combining financial reporting of the individual assets, liabilities, revenue and expenses of two or more companies as though they were a single entity. So this would be over the 51%. You’re thinking that consolidation process might be appropriate with regards to someone that has control over the 51% generally used in a parent subsidiary relationship where the parent company controls the subsidiary company. So in that kind of situation, when you’re looking at a consolidation, you’re saying, hey, look, there’s a parent subsidiary relationship.

One company has control of the other company that typically happens over that 51% threshold, you would typically think that’s more of a hard line, because you’re saying okay, they own 51% maybe, I mean, they clearly can influence You know completely and in a voting situation, what will happen when if a vote were to take place in that situation and in that situation when you might have the consolidation set up two sets of book two separate entities, but when basically having control over the other therefore it’d be inappropriate possibly for them to be reported as though they were one entity. So you would think generally, in the case of that controlling interest, you would have that consolidation process. However, you could have a situation where you have an unconsolidated, consolidated subsidiary. So now you got a subsidiary, there’s a control interest. However, it’s unconsolidated. In that case, a subsidiary that is that is not consolidated with the parent. That’s what an unconsolidated subsidiary will be. It’s going to be shown as an investment on the parents balance sheet.