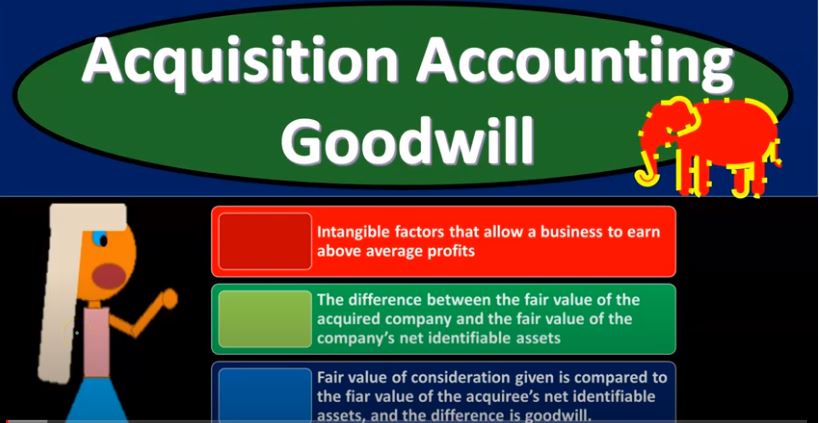 In this presentation, we’re going to continue on with our discussion of acquisition accounting, this time focusing in on the concept of goodwill. Get ready, because it’s time to account with advanced financial accounting. First question is, what is goodwill. So it’s an intangible factors that allow a business to earn above average profits. So the way you might want to think about that is the first thing about a business that isn’t being purchased and sold. If you just got one business that started from scratch, they just started doing business, they started earning revenue, then you can look at their financial statements, they got the they got the balance sheet, assets minus liabilities is the book value of the company, and then the income statement, which is their performance. Now, if you were to say, Hey, is this company worth more than their equity than their assets minus the liabilities than their net assets? In other words, if it is, then you’re saying hey, there must be some intangible factor that’s not really on the balance sheet that would explain the reason why the you know the value of them because most likely through Profit generation, after the the perceived ability, the likely ability to earn profit in the future is greater than just what’s on the balance sheet assets minus liabilities. So you would think then that many companies, if a company is doing well, then there’s going to be some kind of intangible factor there. That’s not basically on the balance sheet that basically explains why the company is doing better than then just the value of the company being assets minus liabilities. So in other words, if we were to purchase the company, you would think that you would purchase it for their assets minus the liabilities, that’s what they consist of, that’s breaking them down to their parts.

Why wouldn’t I just purchase just that? Well, because there’s some other factors, something that’s intangible something we can’t touch, that is helping to generate added profits, which might be the reputation of the company, the brand name, and that type of thing. So when this comes into play, of course, is when you have an acquisition now, now we’ve got to if you have an actual situation where someone is paying more Then the book value of the company. Now you have to have the recognize that difference. And that difference that we’re going to recognize is basically goodwill. So that’s kind of like you can also think of it as kind of like the plug factor in terms of trying to account for a transaction, where someone is paying more than or for more than what you would think the value of the company would be by just looking at the balance sheet. Let’s just so let’s break this down with regards to an acquisition over here. So we have the difference between the fair value of the acquiring of the acquired company and the fair value of the company’s net identifiable assets. So if we’re talking about a purchase situation, you’re going to be saying, Okay, well, what if we have a situation where the acquiring company is paying more than the net assets of the acquired company? Well, it might be the case you might say, Well, that’s because the acquired company’s assets are not at the fair value. They need to be revalued. We talked about that in prior presentations where we could revalue at that point in time at the point of sale. But what if we then revalue like we’re going to do, we’re going to revalue the assets, the net identifiable assets, which are basically the assets minus the liabilities.

So we’re gonna say all right, the assets now we’re gonna take a look at all the assets and revalue them to what we believe the fair value is and say that’s this number. So we’ve done that we’ve revalued all the liabilities here. And then that means that the net assets assets minus liabilities, which would normally be the equity section, right assets minus liabilities, but this is on a book basis, and we’ve now revalued them to a, a fair value. So that so that’s what you would think then that the purchase price would be. But then if the purchase price, if we actually look at the compensation that’s being exchanged here is at 440,000. They’re still paying more than the net assets. And that difference, of course, is the goodwill. So notice that goodwill is something that we assume as a company, typically, if a company is moving along, and they’re doing quite well, we say hey, there’s, you know, there’s probably goodwill that’s in there, but it’s not actually on the balance sheet, right. We’re not going to value the goodwill typically We don’t value goodwill unless there’s going to be an acquisition. And when there’s an acquisition, we can identify the goodwill. And we almost have to in order to make the accounting work, right, because at that point in time, there’s an exchange that took place that exchange that took place, exposes, in essence, the goodwill and is also what is needed to reconcile the transaction that’s going to be taking place. So we’re going to account this for a sale. Therefore, we revalue the assets and liabilities, we look at the net assets at that revaluation we compare that to the consideration that was given and that will allow us to see what the goodwill is given the market transaction that took place. So goodwill, then what are we going to do with that that goodwill, that transaction that goodwill is going to be capitalized as an asset. So it’s going to be on the books as an asset similar to property, plant and equipment, but it’s gonna be an intangible asset.

And then the next question is, you might say, well then do we depreciate it or amortize it? No, we’re not going to depreciate it or amortize it because You can think of it kind of like land, right? If if it’s taken care of the goodwill is something that could last basically indefinitely, right? It’s something that could be there for a long period of time. And therefore, we’re going to keep it on the books, we’re not going to amortize it, but we must assess for impairment annually. So in other words, we’re not going to we’re going to assume that goodwill is still there, unless there’s some problem that had impaired it. And then we need to test for that impairment. So we’re not going to just depreciate it or allocate the cost of it like we do when we do depreciation, or other types of amortization. But rather, we’re going to test it from time to time say, is this goodwill still valid? And of course, you might ask, Well, how would you test it’s not the easiest thing to do, right? And but, but still, that’s the attempt here is to put it on the books and not decrease it by just allocating the cost but put it on the books and then annually test it, and to see if there’s impairment and of course if there is impairment, with the with the perspective that we don’t want to overstate the financial statements, we want to then reach For the impairments that happen, so then we must write down that if there is an impairment, so then goodwill goodwill needs to be tested for, for impairment annually at the same time each year. So we want to do at the same time. And obviously that’s kind of a rule that would they would want that would make sense to put in place because people might try to try to manipulate the system of their goodwill by trying to test it, you know, if there are seasonal business at different times within the season, to try to you know, adjusting so you want the goodwill to be tested each at the same time each year, so that you can so that you can see the same kind of outcomes each year.

So the goodwill that results from a business combinations needs to be designed to individual reporting units. So again, you might say okay, now what we figured out the goodwill, the goodwill you can see kind of takes place. When you think about the aggregate calculation, right? We revalued all the aggregate all the assets and liabilities compared it to the purchase price, and we’ve got goodwill that’s kind of allocated to the entire To the entire organization. Now, when you when you think about Okay, well, how are we going to then, you know, see if goodwill has gone down? Well, then we’re going to have to basically assign to individual reporting units. So that we can, we can better we can better assess. So the goodwill that’s been assessed kind of like on a company level that we’ve applied this goodwill that this company this huge company has, then we’re going to have to basically track that in some way or assign it to two particular reporting units in some way so that we can test for impairment of goodwill on at least an annual basis. The fair value of the reporting unit is then compared with its carrying amount to test for impairment.