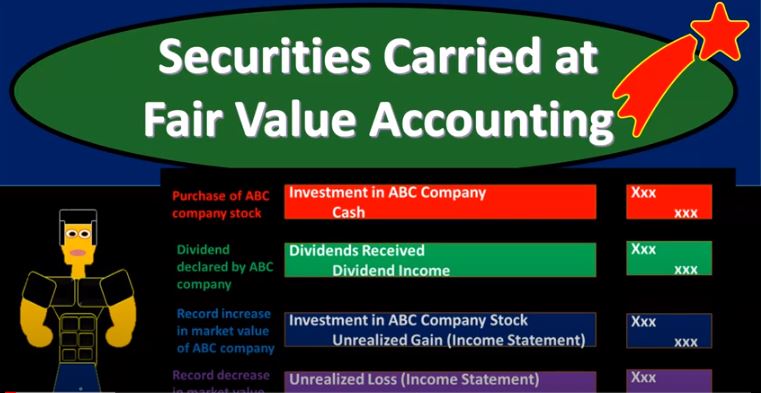 In this presentation, we’re going to focus in on situations where we have securities carried at fair value using fair value accounting, this will typically be the case if one company is investing in another company, and they do not own above the 20%. That’s going to be basically the general rule. In other words, they don’t have significant influence, and therefore, we’re going to be using the fair value accounting method for them get ready to account with advanced financial accounting. In a prior presentation, we discussed in general different accounting methods we were going to use depending on the level of control or influence that one company has on another company we set what can be kind of arbitrary kind of points, which means zero to 20%. We’re going to use one method that they carried value 20% to 50%, the equity method and then 51 through to 100. We might be having a consolidation at that point. So now let’s break that down and concentrate on each of these in a little bit more detail This time, let’s focus in on this first category. Now this would be the category where typically most of the time you would be you would be accounting for something as in most cases, if you’re just investing if one company is just investing like a normal type of investment, just like an individual’s investing, they don’t expect to have really influence over the decision making process, because they have, they don’t have a controlling interest in order to do so it’s just a normal type of investment type of situation, that’s going to be the norm kind of here. And then once once the ownership gets over to a certain percentage 20% 20% being quite large, I mean, if you think about the number of shares that are out there for a large company or something like that, like apple or something like that, you would need a lot of shares to basically be constituting 20% ownership.

And if you had that, then you would have like a significant influence at that point. Or you would think that the closer you get to something that would be 20 would be significant. And again, 20 kind of an arbitrary number, so it’s not a hard line there. That 20% rule. That’s the That’s an arbitrarily drawn number. However, you would think that, you know, if you get that much, you’re now having influence. Okay? So securities carried at fair value accounting. So this is basically in general under the 20%, generally used when investor lacks ability to control or exercise significant influence over the investi. So that’s most of us, right? Most of us invest in companies. We don’t have any control over it, right, we vote but, you know, we, we don’t have a lot of control, even though we are the owners because our ownership percentage is relatively small compared to the total population. So generally at common stock ownership of less than 20%. So we’re talking about ownership of the company common stock, just like we have when we invest in a company, if it’s under the 20%. That’s that arbitrary rule that we that line that we set up that we’re going to typically be using this method. Other factors like the existence of a majority shareholder could prevent the investor from having control or significant influence, even if investment is over 24 So in other words, if you have over 20%, and you would think about a normal type of company, and you say, Okay, everybody else has something under 20%, right. And most people don’t have 20% ownership in a company. And so if you have 20%, and nobody else does, even though their total percentage adds up to 80%, and yours is only 20%, they can beat you there.

But no one actually owns that 80% consolidated together, right, then you would think, well, your 20% is clearly somewhat influenced because you have a pretty large relative influence compared to the ownership of other people. But if there’s someone else so another company, for example, that owns 51%, and you own 20%. Well, now your 20% is not not looking so great, because obviously the person who has 51% has complete control, and you own 20%, which would be influential if it weren’t for the fact that you don’t you can’t possibly have control when someone that can win the vote with one vote whether you know, one person like one other company has 51% so you can see why that 24 And it’s a little bit arbitrary in that situation. So in that, and that’s one very clear situation where of course, the 20% might not might not get you there to influential position. Because again, the normal assumption is nobody else has a controlling interest like over 51%. And 20% is normally pretty, pretty good if you’re voting as 20%. But if someone has 51%, you’re 20% influences now, not very influential in a voting situation against that. So securities carried at fair value accounting, so investor records investment in common stock at cost incurred, and the purchase, which is the market transaction. So obviously, when we purchase the stock just like normal, we’re going to purchase the stock, we purchased it in a market transaction, if it’s a publicly traded stock, that’s easy to determine it’s an arm’s length transaction. So we would assume that it’s a market transaction, we’re going to put it on the books basically at the cost that we pay for it. So investment is then adjusted to fair value at each balance sheet date.

So typically, then the process would be Let’s look at the balance sheet dates, which is basically when we make the financial statements, possibly end of the month end of the year, and will revalue our investments in accordance with the fair value. Now, this is an appropriate thing to do oftentimes when we’re talking, especially if we’re talking about stocks that are publicly traded, because stocks that are publicly traded, we know what they’re trading for, and all stocks are the same. They’re all standardized. Therefore, with with regards to Sox, it’s more appropriate for us to use a fair market value method because we know what the fair market value is, as opposed to something like equipment, or buildings or land where we really don’t know what the fair market value is, because everything on each piece of equipment land building are unique, and therefore we can’t until we sell it, we don’t know. We don’t know what the value is. So notice stocks are different, especially if they’re publicly traded, because we know what the market is saying the stock is worth. So therefore, we can adjust the stock if it’s publicly traded on Amazon To the fair value, and we’ll typically do that at the balance sheet dates, the changes in fair value are recorded on the income statement. So typically, then we’ll say, okay, the difference or the change, if there’s if there’s an increase than we had a gain, then we can record that on the income statement. And if there’s a loss, we can record the loss on the so dividends declared by the investi are recognized as income by the investor.

So we’re going to record that difference as a credit decrease in the asset of our original investment down to what now the market value is, and now we have an unrealized loss, which we’re going to say is on the income statement for for that amount as well. So the characteristics here have this method as opposed to what we’re going to be using with the equity method. Are that one, we’re not Looking at the the actual income statement for the company and trying to recognize our portion of the income, we’re not saying, Hey, I own 5% of this company’s revenue, they have made, you know, 100,000. So I’m going to represent my 5% of that here, because because they owe me that money, well, we can’t get that money, because we don’t have significant influence if we had significant enough, because if we could only we only get the money if we, if we were to make them give us a dividend. And we can’t do that unless we have a lot of influence. We can’t tell the company, hey, give us our 5% we don’t we can’t do that. So rather than that this method is basically saying, rather than doing that, because we we don’t have the control, we’re going to wait till they give us the dividend. And that’s when we recognize the income. So we put it on the books at the market value, we recognize the dividend income because that’s when they’re actually giving us revenue. And then we’re going to we are going to record the market the fair market value, to fair market value because we’re depending on the market in that case to tell us what the fair market value is.

So we’re not depending on the financial statements of the company and recording our share of their earnings, but rather we’re waiting till we either receive the money in regards to dividends or, and or we’re depending on them and we’re depending on the market to be comparing our what we have on the books to the market and so that we can record the unrealized gain or loss related to the market value. Now, the equity section is what you want to compare and contrast this to where we will be looking at the the information that’s being reported on the books of the company that we are investing into, in this case for like ABC company we had over 20% the idea there being then well, if they earned if ABC earned 100,000, and we own over 20%, we have significant influence and we we may then very well be able to force them to give us a dividend if we so choose, or just allow them to keep it on the company. And let them grow the company as well. And since we have significant influence, then at that point we should maybe be recognizing the income not waiting until it gets in the form of a dividend, but rather when they actually earn it. So when they report their income statement, whether or not they issue a dividend, possibly if we have significant influence, we should then be reporting our share of their income in some way. And that’s going to be one of the major differentiating factors between this method and the equity method.