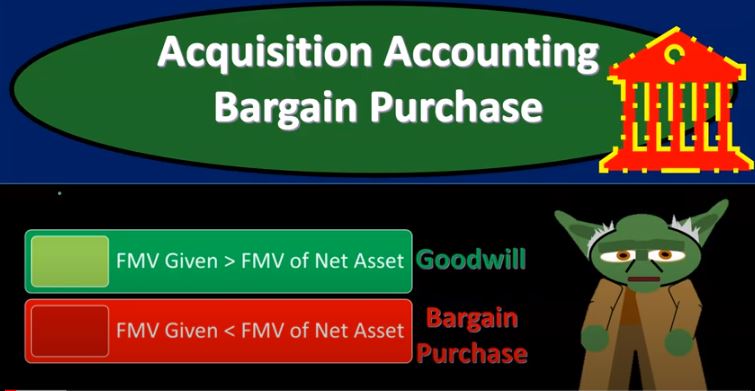 So you want to be aware of it, it could happen, that’s going to be the bargain purchase we’re going to be talking about here, but just realize it’s a lot less likely to happen because you would think that something weird has to be going on for that to be the case, right? Because, I mean, if we were to take the balance sheet of a company, their assets and their minus and minus their liabilities and get the net assets after we revalued all their assets and their liabilities to the fair value, then you would think just to purchase the assets minus the liability He’s not even any any other intangible or whatnot, would be, would be at whatever whatever value it would be right? You say assets minus liabilities at the fair value, you would think that that would be the minimum or baseline price that you would be paying for the company. So if you’re saying that the assets minus the liabilities at fair value is so much and we’re gonna pay less than that, then there’s the US got to be you would think there’s got to be some other kind of thing happening here. Either the company needs to go out of business quickly, there’s a time constraint happening or something going on, for typically that to be the case. So first off, goodwill, quite common. The bargain purchase, you know, you think less common, and you’d probably think, well, what why exactly would that happen? There must be something else that would be going on to be paid less than, than basically the fair value after revaluing the assets minus the liabilities. So let’s get into it bargain purchase, when the fair value of the content of the consideration given the amount that can be given in the exchange. As well as the fair value of any equity interest in the acquire II already held and the fair value of any non controlling interest in the inquiry is less than the fair value of the acquires net identifiable assets, that’s when you’re going to have the bargain purchase.

So then the acquire II should make sure that all acquisition date valuations are valued appropriately. So again, if that happens, then you’re gonna say, Okay, well, did I really value all the all the, all the valuations correctly, because you want to just basically double check the numbers because it would look a little bit unusual, as we discussed, so you want to think okay, maybe I, maybe I didn’t value the assets and liabilities correctly. And maybe that’s the reason that the the amount of consideration given is less less than the net assets, the acquirer must recognize a gain at the date of acquisition. And you can think of this in terms of journal entry kind of components. Do you think about this as basically a purchase that’s happening? You can say, all right, well, the assets that are going to go on the books are going to be you can think of as basically debit the net assets, and then you’re going to be crediting the consideration. Let’s say it was cash if if this was going to be a purchase, that the net assets are getting are less than the credit to cash, so you’re going to need another credit. And that’s going to be the gain, right? So you can think of it kind of like the plug of the journal entry, it being recognized as a game. Whereas if you had goodwill, then and you think about that as basically a sales transaction, then you’re going to say, all right, well, the add the net assets that are going on the books are debited, and they’re greater than the contracts consideration, which would be cash or whatever was given, right, and that would, that would result in another debit that would be needed. And so the debit is going to be an asset that you’re going to put on the books in that case, which would be the goodwill. So we’ll we’ll take a look at some transactions, hopefully, in a future presentation.