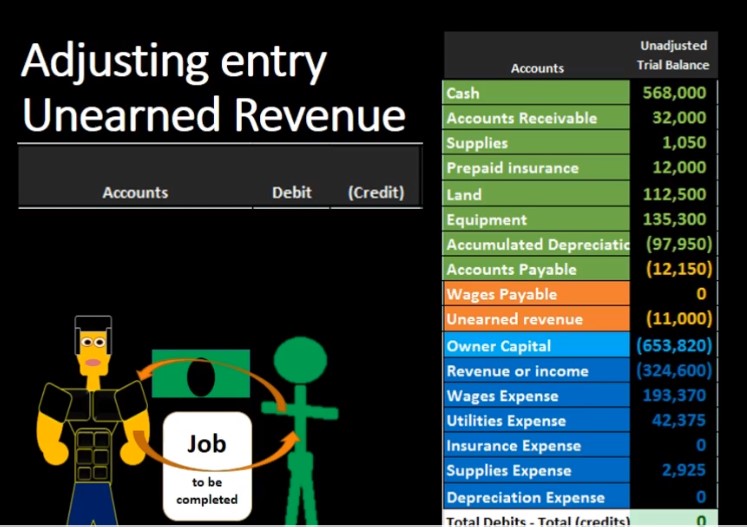 We have unearned revenue, what’s going to be the account below we know that there’s also going to be account below the owner’s capital on the income statement. So if we look at a trial balance, look for an account related to unearned revenue. We might say boom, how about revenue? Those are the two accounts that are going to be affected here. We know that without even really knowing what it is going on, we can figure that out by just looking at it’s an adjusting entry related to unearned revenue. We can also figure out which way we’re going is it going to be a debit or credit how, because the revenue account has a credit balance, and all income statement accounts revenue and expense accounts only go up. So if it’s a credit balance, it has to go up by doing the same thing to it, which in this case is another credit. So we know that we’re going to credit the revenue account. 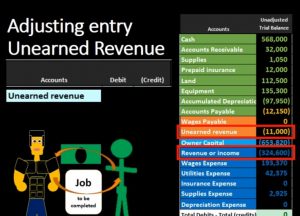 The revenue account is going to be credited so it had 324 600 crediting it by 2007 50, bringing it up to 327 350. On our accounting equation, assets remain the same, we see that liabilities have increased and the equity has increased. Why has equity increased, because revenue increased revenue minus expenses is net income, therefore net income increased. And that is part of the equity section which has also increased. So we can see our totals here in terms of all of our numbers, we can see that the net income went from a credit which was revenue here minus all the expenses credit winning of 85 930 income, then we increase it by another 2700 50 representing the unearned revenue that we have now earned in this time period bringing the balance up to 88 680 also calculated as the revenue minus the expenses on the right hand side on the adjusted trial balance. 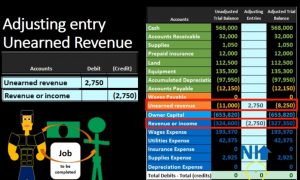