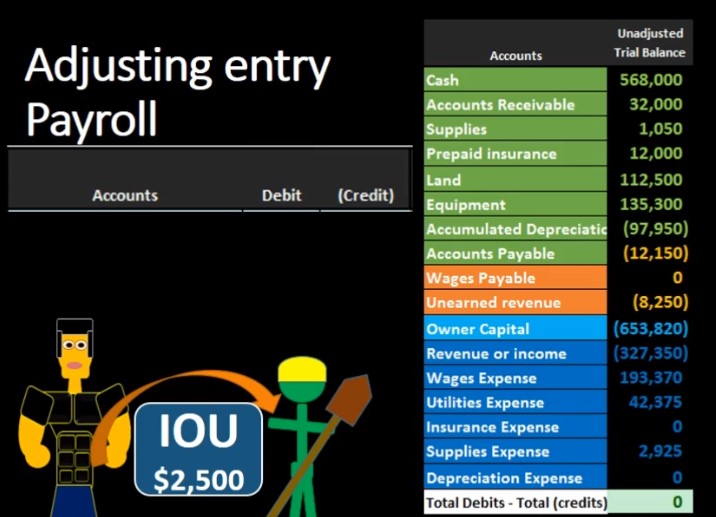 Hello, in this lecture, we’re going to record the adjusting entry related to payroll, we’re going to record the journal entry up here on the left hand side and post that post that to the trial balance over on the right hand side trial balance in terms of assets and liabilities, then equity and the income statement, including revenue and expenses, all blue accounts, including the income statement being part of equity, we’re first going to go through and see if we can find the accounts that will be related to a payroll adjusting entry. And then we’ll go explain why we are going through this process. So just if we have the trial balance, and we know it’s an adjusting entry related to payroll, we know that there’s going to be at least two accounts affected. And we know that because it’s an adjusting entry, it will be as of the end of the time period. In this case, let’s say it’s the end of the year 1231.

When we make the financial statements, and we know that there’s going to be one account above the equity section, which will be a balance sheet account, and one account below the equity section. So let’s look at the trial balance and see if we can find an account up here below above this blue account related to payroll Or wages or something like that. If we look through here we see an account called wages payable, that’s going to be their first account balance. And that’s probably going to be part of our adjusting process, there’s going to be one income statement account below the blue line here. So we got revenue and expenses, we’re looking for something related to wages or payroll. And we see of course, wages expense. So before we even know what’s going on, we can say, Hmm, it looks like wages expense is going to be affected looks like wages payable will be affected. We can also even know which way these will be going.

Because the expenses down here in the income statement accounts only go one way the expenses are going to go up their debit balance accounts, they’re going to go up, so we’re gonna have to debit that account. So we know we’re going to debit wages expense, we may not know exactly what we’re going to debit it for, but we know it’s going to be a debit. And therefore, if we debit that account, the other account is wages payable, we’re gonna have to credit wages payable, we can determine that entire process by recognizing the fact that we are doing an adjusting entry and it’s related to payroll without even knowing what’s going on. Now let’s talk about what’s going on. What is happening Is that wages is usually going to be more on a cash basis. So I’m the most simplistic wages type of process. We can say, let’s play. We’re paying people on Friday. 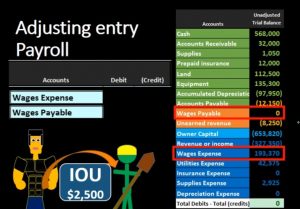 So every Friday we pay people and what happens when we pay them in terms of journal entries, we debit wages expense, and we credit cash in that case. Now I know there’s going to be taxes involved, but removing the taxes, that would be the most simplistic journal entry at that time. But what if the end of the time period which will most likely happen doesn’t happen to land on Friday, so our cutoff date the end of the year when we’re making the financial statements, in this case, 1231 lands on Wednesday, let’s say that means that as of the date that we make the financial statements people workers have worked for three days for which they have not been paid, and they will be paid after the next year they can be paid next year for the three days they work this year. So we’re gonna have to pull that in to the financial statements and once a readers of the financial statements. We have wages payable on this case, meaning they’ve we owe this wages as of this point in time.

We’ve had wages expenses that have been earned during this point in time, and we need to reflect that on the financial statements, many problems, they’re going to basically give you the number here, we’re not going to do a subtraction problem unless there was something in wages payable in this case. So if we’re talking about a problem, the problem would generally say, hey, there’s been accrued wages of this amount, we’d have to know that we’re going to debit and credit this these numbers, how would we get it in real life? We would say there’s been five days worth possibly, let’s estimate how much then we should have been earned in the three days before the cutoff date. So we take the amount of the payroll after the five days and do the ratio of three over five to get the amount that would be expensed. In this case, in this case, we’re going to say it’s the 2500 given to us in the problem. So we’re going to say that we’re going to debit wages expense for that 2500. We’re going to credit wages payable if we then do that, and we post that out. 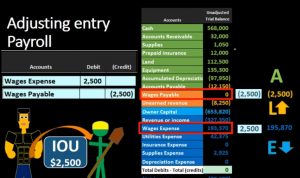 We would say that the wages expense was 193 370 debit net bye. 2500 increase in wages because we’re doing the same thing to it to 195 870 and the wages payable the liability, it’s going to go from zero up in the credit direction by 2500 to 2500. assets have now remained the same nothing has happened to the green accounts, we can see that the liabilities have increased because we owe our our workers money that they have now earned, they have earned before this and the equity is going down, why expenses went up. That brings net income down that brings equity down if we want to take a look at the income statement, we can see that income prior was 8866 80. That’s revenue here the credit minus the expenses that’s income credits are winning, and we brought it down by the 2500 to 80 681 80. So we brought net income down, which of course brings the entire equity section down