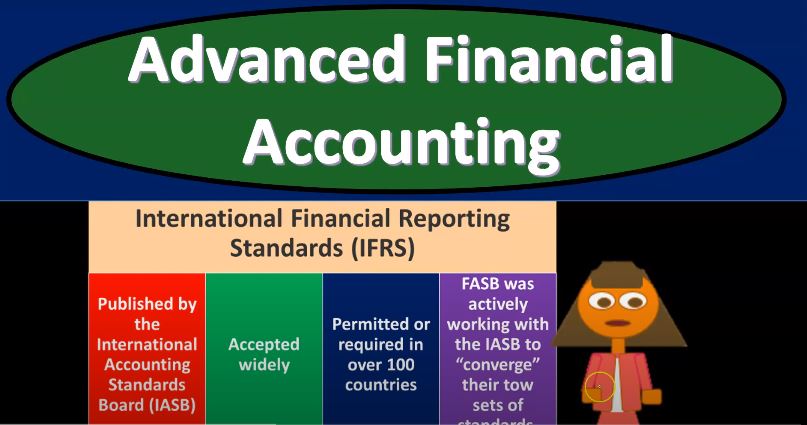 Advanced financial accounting PowerPoint presentation. In this presentation, we will take a look at attempts to converge to one set of global accounting standards get ready to account with advanced financial accounting attempts to converge to one set of global accounting standards. When preparing financial statements of global companies, accounting firms must think about differences and accounting principles across national boundaries. So obviously, if we’re a large company, and we have places of business across national boundaries, then we got to think about well, what are the accounting principles and standards in those different locations? And what are the requirements for us to prepare financial statements if doing business in you know, different countries across boundaries that have different accounting standards, differences in currencies that are used to measure the operations of companies in different countries. So again, this is something of course we have to think about it for a large company. We have places of business in our company that are across different different areas. Different countries that have different currencies, that it’s possible that we could be measuring parts of the books and whatnot in different currencies. We need to know what the standards are in different places so that we can meet those standards if we’re a large company. International Financial Reporting Standards IFRS published by the International Accounting Standards Board is ay ay ay ay SB, as the name indicates International Financial Reporting Standards. The goal here or one of the goals is have one set of standards that will go across different areas, different countries, different nations, which could make it easier to do business in different companies or across borders. So it is accepted widely the set of standards and permitted or required in over 100 countries.

Now the faz B, which is typically going to be in charge of the standards for the US was actively working with the iasb to converge there are two sets of standards. So they were working together and obviously we’ll talk more about the reasons Why it would be nice if we can have one set of standards because obviously, then we have some conformity, amongst other reasons to have one set of standards. But of course, at the same time, it’s difficult to have a bunch of bunch of different countries basically in a green on on one set of standards. So obviously from from the US perspective, there’s pros and cons to setting up and working with one set of standards, there’s going to be questions in short in terms of you know, who’s in charge of the standards or do the standards benefit, by the way they account for things, one place versus another place, or questions like that, or what’s actually the best standard, there might be just simply disagreements on what would be the best standard to report the financial statements most fairly for the for the end users. So in any case, you can see there are benefits to having the one standard, there was a good push for some time moving forward to have that convergence towards the one standard it might have slowed down a bit at this time. point in time, however, but you can see there’s going to be constant pressure to push together to have one standard. And of course, there’s going to be constant problems. As you as you try to basically have one standard that will be will be questions about who will govern it and all that kind of stuff who’s benefiting from the standards and what the best standards are. So benefits of having a single set of globally Accepted Accounting Standards. So why would we want one set of accounting standards? Why wouldn’t we just want different different countries to basically make their own laws, their own rules, their own standards for the financial reporting? Well, one, of course is that it increases that compare ability across countries improving the quality of information for users, and that’s going to be one of the biggest type of things. So I mean, if you’re the end user, you would like to be able to say if I whatever country we’re in, we’d like to say, Hey, here’s a here’s a company that does this.

They make, you know, they make sporting equipment or whatever and here’s another company that makes sporting equipment in another country. I’d like to be able to compare the two and And measure them have the pros and cons and be able to use my statistical analysis and whatnot measure these companies. Well, in order to do that you need to have, you need to have kind of the same tools that they made their financial statements by or it’s going to be a lot more complex for you to kind of figure out the differences between the accounting between the companies that are in different different areas. So compare ability for end users of financial statements that are in different different countries so that investors and other people that are using financial statements, creditors and whatnot, typically external users to the to the better related to the companies can have quality information. So that compare ability is one of the big reasons in my mind, cost of compliance should be reduced for companies that are currently using multiple reporting frameworks. So obviously, we’re talking about these large companies, large companies that have that, you know, have to have some reporting in different countries possibly due to the laws and standards of different countries. If Every country has a different law and a different standard on which the financial statements should be reported then of course you’re gonna have to make adjustments so that you that you can comply with that and you might think well that’s not that big a deal but it kind of is because it gets complicated like if I mean if it obviously if people have probably worked in a situation you might think of working in a situation where you do your your financial statements and then you have to basically do the books death differently for taxes possibly, you know, many people have experienced that different depreciation schedules different you know, sets of you know, accounting rules, possibly for tax tax rules for the taxes versus the accounting. And it can get fairly complex even if you’re just changing one thing like the you know, that this the rate of depreciation and whatnot to make those adjustments.

So obviously, if you got if you do that, again for you know, other countries and whatnot, and have segments of your organization that are in other countries possibly and then have to do at different accounting standards for different segments of the origin under different different rules, then that can be complex and of course, costly should benefit global capital markets. So this should be a benefit to global global capital markets. Because again, you have that more consistency there should improve access to capital in global markets as well. And so markets overall the theory would be obviously, if everybody could agree on standards and implement standards and not, you know, be okay with who’s in charge of who’s making the standards and feel like they’re not biased towards, you know, one place or another place and whatnot. And and we all were in agreement on the standards and had one set of standards, you would think then business overall economics would then increase because we would have, you know, less barriers, less cost and whatnot and more transparency, more information for everybody. So that so you would think that would increase the just the market activity in general