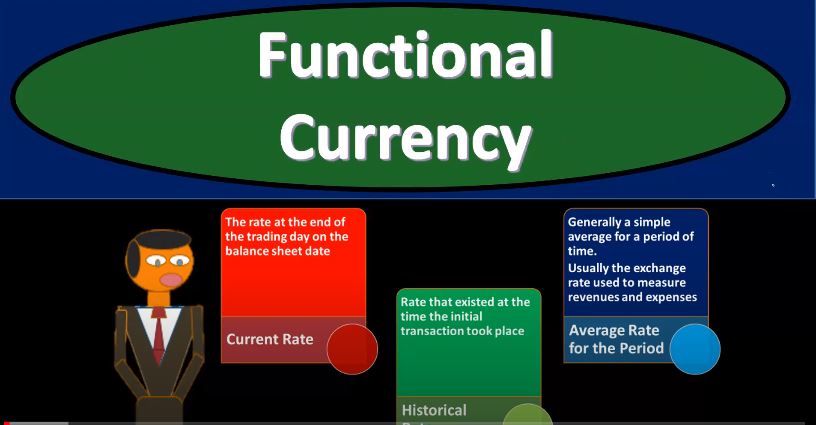 Advanced financial accounting PowerPoint presentation. In this presentation we will discuss functional currency get ready to account with advanced financial accounting, functional currency. When financial statements are restated from a foreign currency into US dollars, we must consider which exchange rate should be used to translate the foreign currency amounts to the domestic currency. So, when we translate the foreign currency to the domestic currency, we’ll have to determine what our exchange rate Are we going to be using in order to do so how will we account for translation gains and losses? So if there’s going to be a translation gain or loss, what are we going to do with that? In other words, should we put the translation gains and losses as part of the income statement reporting it on the income statement, the gains and losses that are due to the translation process exchange rates that may be used? So what kind of exchange rates might we use during this exchange process? Well, we could use the current rates probably the first thing that comes to mind you say, Hey, we got the financial status. As of the year ended of this time period, why don’t we just use the current rate. And that’s typically what we will do for the balance sheet amounts. And that typically makes sense for the balance sheet amounts, because remember, the financial statements, of course on the balance sheet represents where we are at a particular point in time. So simply converting them makes some sense on the balance sheet. But you also might think, Well, what about those things, you know, that we purchased, like fixed assets at a point in time, maybe we should use the point in time that we had the purchase took place. So you could argue on that on the balance sheet, but the current rate on the balance sheet and makes the most sense, but if you’re looking at the income statement, the current rate might not make as much sense because we’re measuring a timeframe that from a year will, let’s say, for a year’s timeframe from the beginning to the end, so maybe it doesn’t seem quite right to use simply the current rate, which would be the rate as of the end of the financial statements if we’re talking like December 31, rather than using some type of race. That would be representative of the period that would covered being January through December, we could use the historical rate, that’s gonna be the rate that exists at the time the initial transaction took place. And again, this one is often would make sense to us if we’re talking about a situation like if we bought equipment or something like that fixed assets, property, plant and equipment, large purchases that are on the books, we might say, well, maybe we should be putting those on the books at the rate that we should be using at the time, basically, the transaction took place. So maybe we would argue for the historical right there. And then we have the average rate for the period, generally a simple average for a period of time, usually the exchange rate used to measure revenues and expenses.

So the average rate, of course, then that wouldn’t be the one we would be thinking what about the income statement that has a beginning and an end? We can’t really choose one rate at any point in time to reflect the timeframe the period from beginning to end that we’re talking about. So Maybe it would make sense to use some kind of average. So we’ll just use some kind of average. And we’re going to say, hey, look, this is the rate that best represents as best as we can one rate that best represents the entire timeframe of the year. So that would be an argument there. And then we would say, well, maybe if there’s a large transaction, you might say, on the income statement, a very large material, very material transaction, you might say, Well, on that material transaction, maybe we should use the historical rate for that very large transaction. But in general, you would think that we would be using possibly an average rate of some kind for the income statement, which would make the most sense. So you can see where it’s getting a little bit complicated to think about the different rates and if you’re going to be using different rates, of course, you could end up resulting in having gains and losses because you’re going to have different translations. For you know, if you use if you have different rates that are going to be used, so functional currency, the currency of the primary economic environment in which the entity operates. So the functional currency once again, the currency of the primary economic environment in which the entity operates. Normally that is the currency of the environment in which an entity primarily generates and expense cash. So the functional currency can be used to distinguish between foreign operations that are self contained and integrated into the local environment. Because if they’re self contained and integrated into the local environment, you would assume they would be using the local currency at that point and those that are extensions of the parent and integrated with the parents.