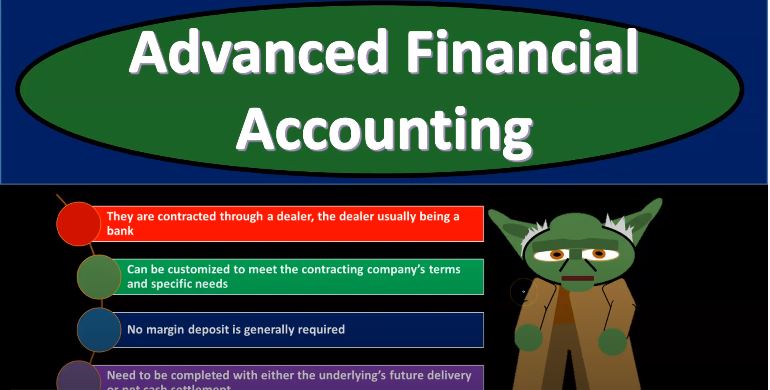 Advanced financial accounting a PowerPoint presentation. In this presentation, we will discuss forward exchange contracts get ready to account with advanced financial accounting, forward exchange contracts. Now we’re going to go over some of the components of the foreign exchange contracts here, we’ll go into them on a lot more detail as we work through practice problems related to the forward exchange contracts. But just to visualize the basic kind of layout of a foreign exchange contract as you think about these items, and there’ll be a lot more concrete once we look at practice problems, we’re basically have a setup where we’re going to be working with a bank or a dealer, typically a bank, and we’re going to be setting up a foreign exchange contract which is basically going to say, we have a receivable and payable on the books at this point in time and we’re either going to put the receivable or the payable that is going to be due to us or something that we will pay in foreign currency at the end of the time period. Whereas the other side the receivable or the payable, the other side that’s not in foreign currency will be in US dollars. In other words, we We will determine the amount that will that we’re talking about. And then we’ll use an exchange rate which we’ll talk a little bit more about the exchange rate that we will use to value it in today’s dollars will put either the receivable or the payable in US dollars and either the receivable or the payable and foreign dollars as of this point in time. And then as time changes, as the rate of the foreign currency changes, then that could result in the difference between, you know, what we thought the value would be, at the point in time we went into the forward contract between the US dollar and the foreign currency as that difference changes over time that could result in basically a gain or loss.

Because Because note what’s happening here is usually if you’re working with the bank, you’re basically saying, Look, I’m going to put a receivable and payable on the books at this point in time based on what we think the future value will be. And so typically, there’s no deposit at that point in time. Because at the end, because there’s no money exchanging hands really, right, it’s just a speculative thing to the bank at the end of the at the end of the time period, then then they’ll settle it at the end of the time period, and so no need so need to complete with either the underlying future delivery or net cash settlement, right. So I think into the time period, typically in that type of scenario you would then you would then settle it at the end of the time period. And that means you would either receive the foreign currency from the bank or be paying foreign currency and receive either the dollars or be paying the dollars at the end of the time period. Okay, so the basic rule of fair value for accounting for the foreign exchange contracts, changes in the fair value will be recognized in the accounts. So typically, you know, if you have the receivable for example, in foreign currency, the changes in the fair value will typically be recognized on the balance sheet because what’s going to happen is you’re going to value it at the point in time that you put it on the books, and then it could change in the future because the foreign currency rates will change in relation to the dollar. And you’re going to change the receivable value typically, in relation to the to the new rates or the closest rates you have. However, the specific accounting for change depends on the purpose of the hedge. So there will be differences depending on why we’re using the four contracts. Are we using it purely for speculative reasons? Are we using it as a hedge? And then what type of hedge are we using it for the accounting will change a bit on that.

So we’ll have scenarios to take a look at those differences. The general rule is to use the forward exchange rate to value the forward contract. So this is the one component is fairly consistent through all the scenarios is when you have the forward contract if you go to the bank and say hey, I want a forward contract, I want it to last 180 days and I want to have a receivable in foreign currency and I want to have the payable in dollars right and that’s you got a receivable and payable 180 days from now I want you to give me foreign currency and I’ll pay you dollars. Well, what kind of what kind of rate should should you have should you use for the foreign currency? The question is normally we use the spot rate, but that would be for today’s dollars, right? That would be us thinking today and we this is out in the future. So typically, the banks what the bank is going to do is speculate as to what they think the rate It will be 180 days from now at the point in time that you that this thing is going to end. Nobody knows what that is. It’s just the best guess it’s a market guess that the bank has that the bank is going to provide there. And so you’ll use this the speculative rate or the foreign exchange rate, which is speculating what the rate exchange rate will be 180 days from now, which will differ from the spot rate what you can currently change the dollars for. And so that’s that’s going to be one of the differences that we’ll have in this we’re not going to be using the spot rate we’re using, we’re using the speculative weight or the forward exchange rate for the forward exchange contracts because we’re speculating to the termination of the contract at the point in time that will actually pay or receive in the foreign currency.