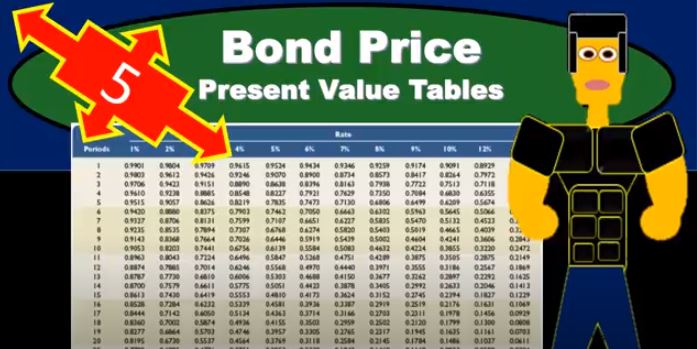 In this presentation, we will calculate the bond price using present value tables. Remember that the bonds is going to be a great tool for understanding the time value of money. Because of those two cash flow streams we have when with relation to bonds, meaning we’re going to pay the bond back the face amount of the bond, and we’re going to have the income stream. And those are going to be perfect for us to think about time value of money, how to calculate time value of money, our goal being to get a present value of those two streams. So we’re going to think of those two streams separately generally, and present value each of them to find out what the present value of the bond will be. We can do that at least three or four different ways. We can do that with a formula actually doing the math on it. We can do it now, which is probably more popular. Now. Do it with a calculator or with tables in Excel, I would prefer Excel or we can use just tables pre formatted tables. The goal here the point is to really understand what we’re doing in terms of what what is happening, what can it tell it? What can it tell us, and then understand that these different methods are all doing the same thing.

So that whatever you’re being taught or whatever you have to work with, whether it just be paper and pencil on a test, or in practice, where you have a calculator, it’s all the same type of calculation is coming from the same place. It’s coming from the math, of course, but us here are we’re How can we apply that? Now, accounting textbooks often use tables, so we’re often going to use a table looks something like this. And the confusing thing about tables is one, they’re just a lot of numbers. So that’s confusing, but once we understand them, that’s not that bad. The other thing that’s a little confusing, it’s just to know which table we need to work with. Remember, there’s two different types of streams that we have here. And one is going to be doing with the present value of one typically called the present value of one or equivalent to this formula. So the table is going to have the time periods Gonna have the rates, that’s going to look the same on any of these kind of present value or future value tables, what’s going to different, we got to make sure that we look at the name of the table and are picking up the correct one for what we’re doing. So if anything says future value, that’s not the one we want. Right now, we’re not trying to calculate what the future value is, what we’re trying to do is calculate what the present value is. So you can eliminate those two tables and you’re left with a present value of one or present value of an annuity.

And so all we have to do is take that times the percentage, we get the 80 to 270, that wouldn’t match the math if we did the math to do the same thing. So all that means is, of course, that we’ve got 100,000 that we expect to pay for two years from now or four time periods for six month time periods. Then if that was the only thing happening, and we weren’t paying any interest, today, we would expect to get 82,002 70. In other words, if I was just going to pay 100,000 at the end for money today, then you would think the market would say I would get 80 to 270 from somebody today willing to give me 80 to 270 for me to pay back 100,000 at the end of four time periods or two years. Then we have the other component which is going to be having to do with the interest which we’re paying 4000 which is 1000 times to eight percent. So we’re going to pay interest of 100,000 times point oh eight, that would be the yearly rate stated on the bond divided by two 4000. That’s what we’re actually going to pay every six months for four periods two years. So we’re going to use our table again, but this time for an annuity, and you can tell it’s an annuity table, because they’re greater than one, the amounts are greater than one. And we’re going to pick the same area that 5% for periods for periods, two years times two, for semi annual 5%, because we’re taking the market right now.