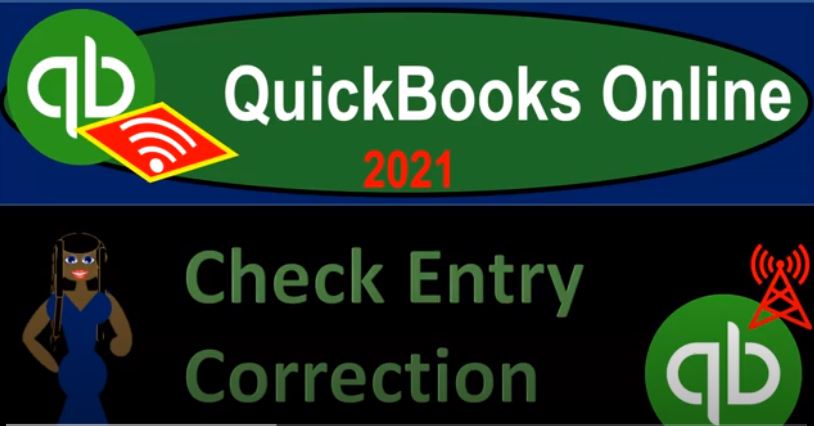 So we can how might that happen? Notice that if we actually wrote the check here, and we actually wrote it in QuickBooks and printed the check, and from the QuickBooks system using pre printed checks, it’s unlikely that in that format, that the cheque number would be incorrect, because we actually used QuickBooks to print on the physical check. However, if we’re talking about a situation where we have a separate checkbook, and then we’re doing the data input into the system, it’s possibly we miss key this, I’m going to say that this should be 16,000 instead of 18,000.

So that’s one kind of problem that could take place. Also, if you’re taking the information, say from a bank statement, and you’re entering that into the system, again, that raises a problem where you could have basically a miss key type of information, when might you catch that, because if it’s just wrong, both sides are going to be wrong, the double entry accounting system will not catch that, when will that come to light that will come to light when you do the bank reconciliation, oftentimes, because when you tie out what has cleared the bank to what we entered into the system, those two things will not match.

And that’s when you’ll probably find an error such as that, once finding the error, then what do you do about it? Now note, there’s a couple things that you can think about doing one is you could simply change the check. And that’s probably what most people will do. So if you’re, if you’re doing this in real time, you can actually simply drill down on this check right here, we can drill down on it, and then we can go into our actual cheque and just simply change the amount.

So if we do the bank reconciliation, we notice it is wrong, we might simply go in there and do that. However, realize that as we do that, there’s a few caveats to that method. One is that the fact that you’re not typically that you wouldn’t want to do that in in like a full skill accounting system, they may not let you basically delete the check, you might rather have to avoid the check and enter something on top of that. The reason for that is that you want to have the audit trail.

So typically, the solution shouldn’t be to delete things or change things, but rather to, to record something over the top of it so you can see what originally happened. And then the change that took place. And especially you have to be careful if you’re talking about something in a prior period. So for example, if you’re talking about something that was in the books as of last year, and now

Now you’ve realized that it was off or something like that, and you want to go in and change it or delete it, then you’ve got to be careful because if you already made say your tax returns or your financial statements, and closed out the process, in essence, then if you delete something in the prior year, basically the amounts in your system will be incorrect. And your beginning balances for the current period will basically be incorrect. So how could you do it in another format, we can go to the to the first tab over here, I’m going to go to the first tab, I’m going to go down to the checking account down below to the chart of the accounts.

And then let’s go into our bank account. Let’s use our register here. And if I was to determine that this was the check that was having a problem, I’m going to close the hamburger up top, if I go if I go into it, you could basically duplicate it, and then void it right duplicate it, enter it again, void this check and then have it entered it again, that’s one thing you can take a look at. Also, if you note that you need to avoid a check, and if it was in the prior period, then it becomes a little bit more complex.

So if you’re voiding a check in the prior period, I think we have another presentation on that. So I’m not going to go into it in a lot of detail. But you want to be careful, there’s kind of basically two methods that you can you can use. One is that you can basically enter void kind of in the memo of this check and then enter another transaction that will net out this check so that those two items will net out when you do the bank reconciliation, the other but I think it would actually be better to make two two new transactions.

That would basically be journal entries that would net each other out. And then you can actually physically void this this transaction so that you don’t get any confusion with it being voided. So if you put void in the memo, that gives you a pretty good indication but if you actually void the entire transaction and Then enter two more with basically journal entries. So you have to enter the original transaction, and then you would have to enter the the new transaction in the current time period. So again, if you’re kind of adjusting something that’s in a prior period, like a prior year or something that’s already closed, then you got to be a little bit more careful.

We have another presentation that talks about voiding a check in a prior period, you might want to take a look at that in that case, in this case, however, we’re going to say alright, this was just an error that was made in the current period. And we kind of found it when we did the bank reconciliation, we’re going to do the easy change, which is just to basically drill down on it from the financial statement. That’s one way that you can find it and then just physically change this item here to 16,000 in our case, and then I’m going to save it and close it.

And then if I go back up to the reports up top, if I go back up to the to the report, now that should have changed our checking accounts, and it should change them the furniture and equipment. So I’m going to go back into the checking account here. And we have that change. There’s the 16,000 and then if I go back on up and go to the furniture and the fixture, we got this item the other side of it then will have changed as well the 16 instead of the 18. Going back up. This is where our trial balance stands as of this point.