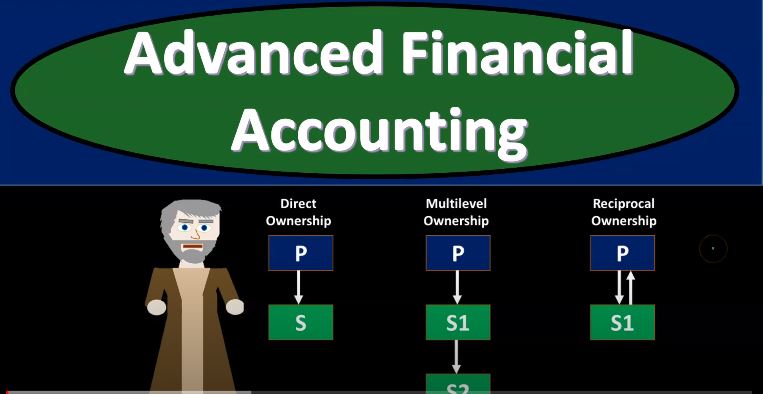 When we’re talking about a multi level ownership, we’re talking about the parent has indirect control, consolidated entries are similar to the ones used in a simple ownership situation. But extra focus is needed for the sequence in which the data are put together. We’ll get to that in a little bit more detail, we got to basically think about how we’re going to structure this thing. When we have multi level ownership, then we have the reciprocal ownership or mutual holdings. So now we got this situation where P has a controlling interest of as parent of subsidiary but as also has some ownership of P. So that’s the reciprocal or mutual holding situation. parent has a majority of the subsidiaries common stock and subsidiary has some of the parents common shares when mutual shareholders shareholding are not considered in the consolidation, some reported amounts may be mutually overstated. Let’s break these down a little bit further. So now we’re talking about the multi level ownership and control multi level ownership control the situation where we have some of the ownership of some of the subsidiaries being indirect rather than all direct ownership of the subsidiaries. consolidated statements include companies where the parent only has an indirect interest, so we’re gonna have to include them. Those companies where there’s an indirect interest with a parent doesn’t hold a direct interest or controlling interest themselves, but possibly through other entities and the complexity in the consolidated process will increase when additional ownership levels are added. So this can get you know, more and more complex obviously, when we have these more complex kind of ownership levels that would be involved. And then at each level of ownership, the amount of income and net assets to be assigned to the controlling and non controlling shareholders and the amount of the unrealized profit and losses to be a little emanate needs to be determined.

So we got to determine that, you know, that process basically at each level, continuing on with the multi level ownership and control. So we’ll go through the kind of a steps at this point, the first step is generally to consolidate the bottom or most remote subsidiaries with companies at the next higher level. So if you’re, if you’re visualizing this and there’s multiple levels that are taking place, then you basically can start at the bottom and start your consolidation on up and just keep on going to the consolidation consolidate in that way, that’s when we’re considerating the sequence of the consolidation. The process is continued as you go up through the ownership structure until the subsidiary is owned directly by the parent company. Our consolidated income needs to be up a portion at each level between the controlling and non controlling shareholders. So basically, you can imagine this process where basically you know, starting at the bottom, we’re we’re consolidating up up until we get to The to the parent company. Now let’s move to the reciprocal or mutual ownership. So that’s going to be the situation you’ll recall where the parent owns the subsidiary controlling interest. But the subsidiary now holds some interest in the parent, the purchase of a parent stock by subsidiary is treated the same as if the parent had repurchased its own stock and has whole holdings it as treasury stock. So from the consolidation standpoint, that would kind of make sense, right? If you think about this as one entity, and then and you’re really looking at this from the parents perspective, and then the subsidiary then purchased back or purchase some of the parents stock, then from a consolidated standpoint, we’re going to think about basically as as a treasury stock as if the parent company purchased back their own stock. subsidiary will generally account for investment in the parent stock using the cost method.