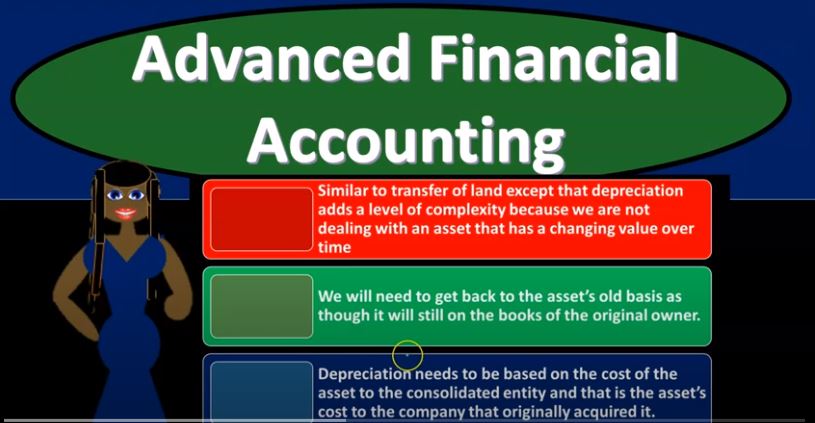 So we will need to get back to the assets old basis as though it were still on the books of the original owner. So we’re going to do a similar kind of process with the land and basically, with with the original sale that takes place, we’re going to have to basically go back to the to the original basis, we’re gonna have to kind of reverse the item in a similar way that we did with the land to go the original basis, but that’s still a little bit more complex than the land because there’s two accounts that account for that original basis now, which is going to be the the cost of the depreciable asset and then the accumulated depreciation related to it. So we’re gonna have to adjust both of those back to what they originally were because the new purchaser is going to record it on the books at their cost and they’re not gonna have any other cumulated depreciation related to it, and then depreciation needs to be based on the cost of the asset to the consolidated entity. And that is the assets cost to the company that originally acquired it. In other words, if it’s if we consider this as a consolidated entity, then you can’t have a transfer from one from your to yourself, we need to we need to have the original cost which of course is the cost that was originally paid for it when the it was purchased from someone outside of the organization. The transfer that happened from one to the others parent to subsidiary or subsidiary to parents will typically result in another or different cost. And we’re going to have to basically account for that depreciable asset transfer consolidation entries will impact the asset, the related accumulated depreciation and depreciation expense. So obviously with land that the adjusting entry still had to do with the asset but and you know, reversing the gain and what now we got the accumulated depreciation that we’re going to have to add To that, so remember key component with the original transaction that took place when we basically reverse it, we got to deal with both the land the the original cost of the depreciable property and the related accumulated depreciation, then we have to deal with the going forward depreciation that would be recorded on it. As time passes, the original owners remaining useful life at the transfer date will no longer be relevant and the purchasers estimated remaining useful life will be needed. So in other words, when we think about the transfer that took place, and we think about the depreciation that will be calculated going forward, how are we going to calculate that depreciation, we’re not going to be using the remaining useful life for the parents company, what we’re going to do is say what is the purchaser saying is going to be basically the useful life and we’re going to use that for our calculation then of the depreciation going forward from that point in time.

So in other words, we’re going to have to basically pull this thing back this transfer that took place back to the back to as if it Didn’t happen basically back to the book value that put it back on the books as it was originally purchased from an outside party as if this transaction didn’t take place. And then we’re going to calculate the depreciation on it going forward in our consolidation entries, we’re going to do so however using the new useful life that could be different if it’s different than new useful life, giving the purchasers estimated remaining useful life at that point. So this will all of course make more sense once we do the consolidation transactions and example problems. So I highly recommend working through example problems that we will have with regards to these