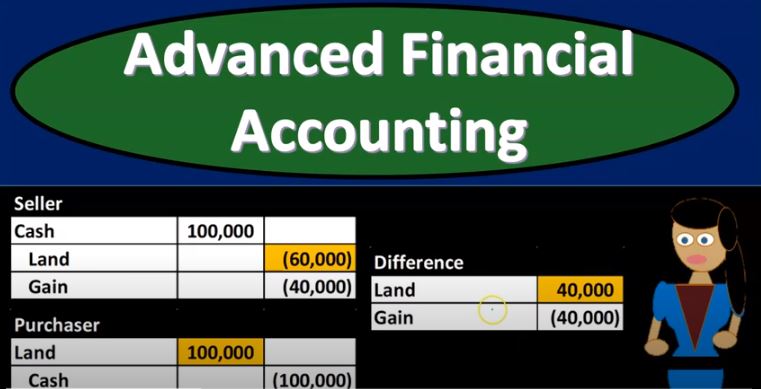 Advanced financial accounting PowerPoint presentation. In this presentation we’ll take a look at the equity method and land transfer get ready to account with advanced financial accounting, land transfer intercompany. Within the context of our consolidation, then we’re talking about situations where land is transferred from subsidiary to parent like a sale from subsidiary to parent or from parent to subsidiary. That resulting in basically an intercompany type of transaction we’re going to have to deal with with the consolidation process and possibly with the recording of the equity method by the parent as they reflect their investment in the subsidiary. We talked a little bit last time about the land transfer being similar to the inventory transfer because typically you’ll have like a gain that will be involved in it and your physical inventory that is changing hands. It does not have the added complexity as the property plant and equipment type of transfer. That would be depreciable assets with regards to accumulated appreciation and appreciation.

So the parent company will need to make adjustments for preparation of consolidated financial statement for the entire time the acquiring company holds the assets. So in other words with the land transfers, when transfer happens from one to the other, you know, the person who is acquiring the land is now going to put that land on the books at whatever the purchase price is. And that’s basically how it will be every time we do the consolidation process, then, we’re going to have to basically account for that because the land isn’t moving, the land isn’t typically going to go anywhere. Unlike as we saw with the inventory with inventory, we expect that the inventory will typically be resold. So we expect it to be resolved fairly quickly.

With Land Of course, we expect it to be sticking on the books. In the end, the closing entries that we have here are going to be closing entries that we that aren’t permanent, they’re not going on either. They’re not going to go on either books. Therefore, we’re gonna have to keep on making the adjustment for it as long as the land is being held. Luckily, However, it should be assumed it should be the same transaction once we know what it is, it should roll forward as long as the land is being held, held to. So if land is transferred at book value, there’s no need for special adjustments in preparing the consolidated financial statements. So in other words, if if you had a seller that sold the land, let’s say it was for 100,000 and got cash of 100,000, they sold it for the amount that the land was no gain or loss. In other words, the purchaser would then put it on the books for the hundred thousand. And then when you have the consolidation process, all that would happen is it got transferred, it would be like a transfer from one department to the other. When you consolidate the two, obviously the cash then cancels out, and then the land within within basically cancel out between the two there would be no net change. So if it was sold, and there was no resulting gain or loss, in other words sold at book value, you wouldn’t have any problem if it’s not at book value. That’s when you typically have a problem that would look something like this if we imagine this situation because they are at The seller has the land on the books for 60,000. They take it off the books for 60,000. But they sell it for the 100,000 to a related Party, which means they now have a gain of the 40,000. What’s the purchaser going to do the related party within the consolidation? Well, they’re going to put it on the books for what they bought it for 100,000 and then you’re going to have the cash of the 100,000. So that means in this case, now, you can see that we have the cash nets each other out. But the land is now overstated, because it should be on the books for the original cost, because there’s no real sale that took place. So this is similar to the inventory transaction, we could think hey, you know, we should just reverse this entire thing. But or we can kind of distill this down to what we need to reverse we don’t need to reverse the cash because it nets each other out. The land nets out to a change of 40,000. So we’re gonna have to deal with that. And the gain basically, you know, we’re gonna have to do with the game as well should be basically removed. If we think Think about it as a as like a wholly owned subsidiary, then of course, we would just think about that as as needing to be removed. So, parent company has the option of using the fully adjusted equity method, it would result in adjusting investment and income from the subsidiary accounts to remove the unrealized gain. So using the fully adjusted equity method, you would basically be saying, Hey, I know that the subsidiary is not is not taking this into consideration, you know, they’re recording this item the land on the books at the 100,000. But when I do the consolidation, I know about basically this this adjustment that will be made for the consolidation and I’m going to take that into consideration with my equity method calculations. Therefore using you know, the fully adjusted equity method, where you would have a journal entry that would look like this, this would be a journal entry when the parent company is the accounting for their investment in the subsidiary company.

And again, we saw a similar kind of situation with inventory we’ll treat that in a similar way. If assets are sold upstream and parent resale them during the same period, parents equity method entries will as well as the consolidated entries will be the same as those in the downstream transact situation. And that would be similar to you know, an inventory situation where the inventory basically was sold. However, we would expect for the land that not typically it’d be the case right, we would expect there to be a transfer and typically the land would be sticking there and would unlike basically inventory that went one to the other which you would expect then a resale transaction. If assets are not resold by the period end, the consolidated entries will be different, will be different by the appropriation of the unrealized intercompany gain. So there’s going to be that difference between the upstream transactions and the downstream transactions in that case