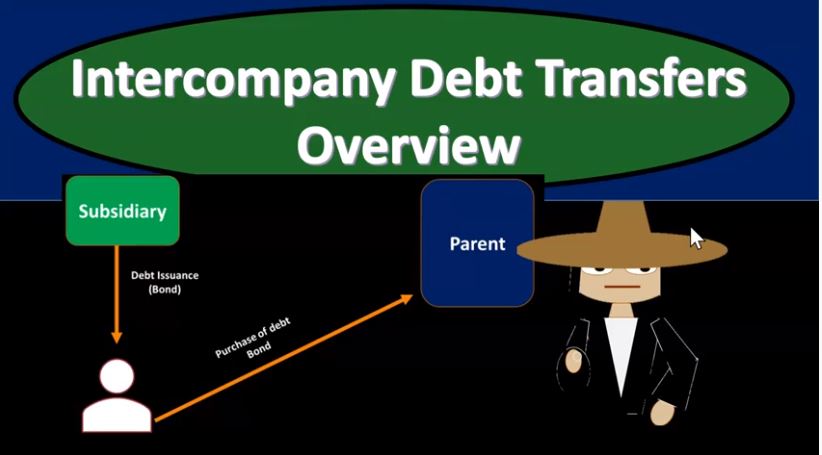 So when we think about debt, remember we’re thinking about something like a notes payable or bonds payable will typically be using the bonds as the examples we have one company issuing bonds to typically another company related affiliated company. So in the case of the direct intercompany debt transfer, that’s usually going to be the easier kind of process, the indirect is going to be a little bit more complex. So first direct intercompany debt transfer, that’s when we have a loan from one affiliate to another. So the affiliate being parent or subsidiary, in our cases, when we’re thinking about the consolidation process, from the parent to subsidiary subsidiary to parent. So you can think of debt being issued or say bonds being issued from parent to subsidiary or subsidiary to parent does not include the participation of an unrelated party. In other words, there’s no third party to this equation. This is an A and B, relationship, a B transaction, no c involved in it very straightforward. That’s going to be a more similar type of a more simple type of transaction to deal with within the consolidation process. If we have an indirect intercompany debt transfer transfer, then that includes the issuance of debt to an unrelated party and then the purchase of the Debt instrument by an affiliated affiliated of the issuer. so in this situation, we have someone else involved.

And again, we typically will think about the bonds that are going to be involved here if you have the bonds going from one entity to an entity unrelated, so a subsidiary or parents issuing bonds to someone who was not a subsidiary or parent, and then and then later, the related entity, a subsidiary or parent then purchases that instrument from the third party that was originally sold to now you have this indirect intercompany transfer. And that’s going to cause a few more problems within our consolidation process. So we’ll typically start with an easier kind of method here that the easier kind of transaction where you’ve got the straight debt transfer one to the other, you’ll have a nice Mereen transaction from one to the other. And then we’ll talk about a little bit more complex situation with the indirect intercompany debt transfer. So this is a visual of the direct intercompany debt transfer. So we have the subsidiary issuing the debt, we’re going to say bonds to the parents. So they’re going to issue the bonds to the parents. So if this were the case, then you’ve got the debt being issued that the instrument being the bonds in this case being issued by the subsidiary, they would then be receiving cash and issuing out the bonds recording the bonds payable on their books. And then the parents would be the people purchasing the bonds and in this case, putting the investment on their side, and you’d have a nice kind of mirroring transaction for those activities. Then we have the indirect intercompany debt transfer. So now we have a subsidiary in this case, selling let’s say, bonds debt to some unrelated Party, which there would be no problem there. That’s that’s a normal type of transaction. But then if the parent comes along, the another affiliate comes along and purchase the debt, not from the related party itself, but from a third party because obviously you could sell the bonds again, and they could sell the bonds to the parent. Now you have that indirect relationship and the reason this is going to be a problem Because there could be a case where basically the subsidiary sold the bonds, let’s say at a premium. And then let’s say the parent then purchased it at a discount or something like that, you’re not going to have the same kind of nice mirroring process when we when we consider the elimination entries in that in that case, so we want to consider the more simple case, and then we’ll go to the more complex case. So we have the bond sale directly to an affiliate. So what if we had a bond sale directly to the affiliate, that’s going to be the more simple case where that direct transaction effects of the intercompany indebtedness need to be removed.

So obviously, we’re gonna have to remove that transaction because we’ve basically sold bonds to ourselves, we loaned money to ourselves from the perspective of a consolidated entity, so we’ll have to remove it. If transferred at par, the interest recorded by the entities will mirror each other nicely. So in other words, if we transferred it at PARC, there’s no there’s no premium and there’s no discount, then you Have a nice mirroring process of of the of the transaction. And it’ll be, you know, fairly simple to remove the transaction issued at a discount or premium bond interest or expense recorded does not equal cash, interest payments and interest income. And expense amounts are adjusted for the amortization of discount or premium. So obviously, if we issue it at a discount or premium, then that’s going to have an impact on the original issuance. And it’ll have an impact on how we’re going to be recording the the amortization or the the interest expense and the amortization of a discount or premium. Now Still, if there was if there was a direct, if it went directly from the affiliate, it was issued directly to an affiliate, this will still be a little bit easier to deal with, even if it’s issued at a premium or a discount than if it was issued and indirect method. So we’ll see that and this will be more apparent obviously when we go to example problems, so highly recommend looking at some example problems and working through these items to really understand these concepts. This will be an overview of them bond of an affiliate purchase from a non affiliate. So now we have the bond that was issued from one party to a third party in a more complex situation. And then an affiliate came along and purchased it from the third party. So someone purchased the bond of an affiliate from a non affiliate, so it wasn’t issued directly from affiliate to affiliate. It was then purchased from a non affiliates, okay. Bonds are really originally issued to an unrelated party are purchased later by an affiliate of the issuer. So that’s going to be the more complex situation, viewed as a consolidated entity, the acquisition of the affiliates bonds, retires the bonds. So if you think about this from a consolidation type of standpoint, if if the bonds were outstanding outside of the whole organization, if you think about these two companies together, and then one purchases them back from The third party well, then they’re basically no longer outstanding, you basically retired them from the perspective of a consolidation.

So that’s in essence, the perspective that we’re taking from a consolidated standpoint, basically the the perspective that the bonds have then been retired at that point. So even though the bonds are not really retired, so they’re still going to be basically on the books of of the entities themselves, they are treated as though they are when preparing the consolidated financial statements. So when we prepare the consolidated financial statements, our perspective then when we do the adjusting entries will basically be as if the bonds had been retired at the point in time that they were purchased by an affiliate, you know, now they’re basically intercompany transaction. That type of retirement is going to be called a constructive retirement. A consolidated income statement shows a gain or loss on debt retirement based on the difference between the carrying value on the books of the debtor and the purchase price. paid by the affiliates. So we’re going to have during this construct of retirement process, we could have a gain or loss that’s going to be reflected or shown or a result of that construct of retirement, bonds payable and purchasers investment in the bonds are not reported on the consolidated balance sheet. So in essence, when we remove this, as you would expect, we would be removing the bonds payable and the investment as a result of this transaction, the bonds are considered to no longer be outstanding. So we’re going to say the bonds are basically not outstanding, because they’re going to be constructively retired. So we’ll do the same kind of process that you would expect with the consolidation entries, we’re going to remove the bonds because that now they’re owned in terms of an intercompany type of transaction. And we’re going to be removing the related premium, the related discount on the bonds, and the we’ll have to deal with the revenue and the expenses, the interest income and the interest expense. But we’ll also have this kind of situation because those transactions will not mirror the each other as well due to the third party transaction, which could result in a in a gain or loss that we’re going to have to deal with as we go through this process as we do the consolidation. That was just an intro to this. This will make a lot more sense once we do practice problems for it. So I highly recommend going through some of those practice problems so we could see these calculations and see the journal entries related to them.