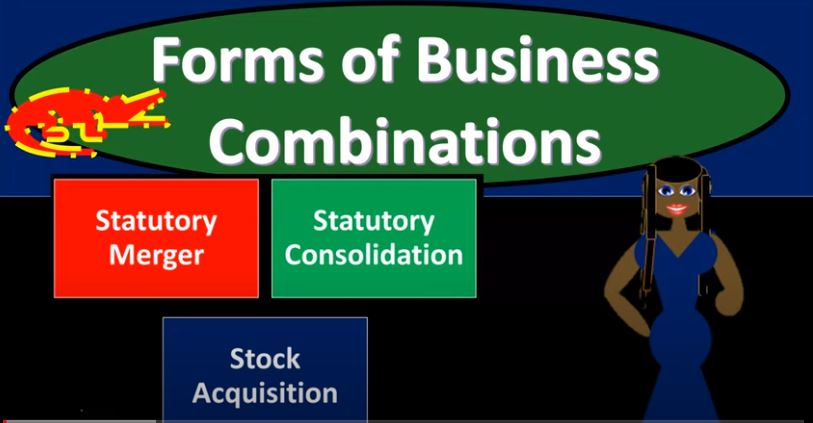 So if we’re talking about a statutory merger, we talked about that before and that really is the case where you one company in essence, you can think about it as being consumed by the other company right if you got company a and Company B, basically a company is going to be consuming Company B. Therefore the assets and liabilities of Company B will in essence, result with Company A, the end result is Company A then with which now has the assets and liabilities. have V, so that’s going to be the merger type of situation. So that will be assets, liabilities of the acquired company are transferred to the acquiring company, right assets and liabilities are transferred. Now notice when this happens, you’re thinking, alright, now there’s two entities, two entities that have different stockholders at this point in time, typically, and therefore you have a negotiation process. And therefore, when that transfer happens, you’re going to think, Well, it looks a lot like there’s going to be some negotiation process. And therefore, you may have to revalue that that as fair market value as as basically an arm’s length transaction. It’s kind of happening because these two parties have interests that are often different from each other with regards to this negotiation on the merger type of process. So what’s going to be the accounting related to that, so assets and liabilities of the of the acquiring company are transferred to the acquired company, the acquired company is liquidated or dissolve. So once the transfer happens, then you’re left with what a ship Here, you’re going to say, Okay, now the assets and liabilities are taken out of the books here, on Company B, they’ve been transferred in some way shape or form to Company A, if you’re taking a look at if you’re thinking about this from a bookkeeping standpoint, now you’ve got company B, which has no assets or liabilities anymore, we basically did a liquid, we basically liquidated all the assets and liabilities and are left with just a shell, the shell company not having anything in it.

And of course at that, and of course, then you’re gonna dissolve the company B. And then the result is a single entity is the result of the merger. So now you have Company A, that now has the assets and liabilities of Company B and has now basically consumed it. So no, you’re not left with with regard to the merger, a subsidiary parent relationship, you just basically had two entities before and they’ve been consumed to one you can think about, Okay, what else is the accounting? where they’re going to be the accounting concepts? How are we going to do that from an accounting perspective and you can see basically, this is a how it’s done right? Yeah two entities, you’re going to combine them together, you’re going to have to deal with however the the rules with regards to this process which could involve reevaluating, instead of just putting the book values over into the prior company, but in essence, obviously a company be clearing it out, liquidating it, in essence, rolling the the assets over here left with the shell, then the shell needs to be in essence dissolve leaving you which is company a statutory consolidation. You can also imagine this type of situation you say, Well, what if we have these two companies and we basically create another company, and we merge both of their assets into the new company, so that we had Company A and we had Company B, what if we create, say, another company, company C, and then put the assets of Company A and B into it? So it would look something like this, both companies are dissolved assets and liabilities being transferred to a new company. So we have a new company set up the assets and liabilities transferred. It now you have a new legal entity form because a company C is now the new legal entity. However, in substance, the company is often actually one of the combining companies reincorporated with a new name.

So in other words, you had two companies before, you can think of a situation you might imagine this situation is saying, Well, now you’ve got the third company, maybe these are going to be basically even sized companies or whatever, and you make another company and merged them together. And now you have a new company. But typically, even though in substance, you can have a new company, as a result of this transaction, it still is the case that usually you’re going to have one of these companies that are going to be larger than the other we might say here that A is larger than B. So even though they’ll inform you have a new company that has been created, in substance, it’s often still a situation where you you basically had kind of like a merger type of situation, purchase, type of situation, a consumption of you know, one Big companies into another. So that’s generally. So you can think of that same concept substance versus form kind of debate, similar type of debate that you might have versus when you think about a lease versus a purchase, when you have a lease that looks a lot like a purchase, you have a similar kind of thing here where you’re saying, hmm, new entities being created, but in form, however, in substance it looks, it could look oftentimes looks a whole lot like a situation of, of a standard merger, a statutory type of merger, where the new company is basically, you know, the controlling company here and the other company basically got consumed by it. Now, then we have the stock acquisition, this is another way that you can see this happening, rather than we could then have Company A and then Company B. You got company a and Company B, voting shares are acquired. So now you’re going to say that company a purchases the voting shares of Company B.

So, both companies still operate as separate, but related legal entities. So now you’ve got two entities because Company A you can imagine buying the stocks of Company B if they acquire more than that magic number for controlling which is typically over 50% 51% or greater, then they have a controlling interest because they can basically influence management, you know, they can influence who is management they can vote management in and out in and of themselves. Then you can see that relationship and of course, that relationship would result in a parent subsidiary type relationship because now you have the parent who has all the stocks that parent the one entity now owns basically a controlling interest to stocks that allows them to control you know the behavior of the second company, and of course company is control is controller owned by the owners of Company A the acquiring company accounts. For its for its ownership interest in the other company as an investment. In other words, when you have this when you have this transaction taking place, Company A is purchasing the stock of Company B, it’s going to be recording this logistically on the books in terms of a journal entry as an investment. So we’re gonna have an investment in terms of an asset on company A’s books, a parent subsidiary relationship is created. So we have a parent subsidiary relationship, consolidated financial statement reporting is generally required. So note that obviously when you record the transaction of the purchase here, company is purchasing Company B, you can have to record that on company A’s books as an investment in Company B. However, when you do the financial reporting note that you’re then going to have to report this as consolidated financial statements. In other words, you’re gonna have to take the the parent and subsidiary like we said, if there’s more than 50% ownership, that controlling point and then report that basically as if it’s at As if it’s one entity so that you can report it in such a way that’s as transparent as possible to the readers of the financial statements acquisition.

So we can break this down basically to the purchasing of the assets purchased the acquisition of stock. So if we purchase the assets, then that’s where the one company acquires another’s assets using negotiations with management. And in that case, there’s pros and cons to either method, it might be a little bit more cumbersome to sit down with two company management and try to go basically, you can imagine going line item by line item here and setting the price negotiating the price for the actual purchasing of the assets. However, you might have more flexibility with the assets you want to purchase. And you may be able to purchase simply those assets. And you may may be able to not take on some of the things that you don’t want, such as liabilities and contingent liabilities and contracts that you may not want to take on as well. So there’s pros and cons to either method or we have the acquisition method of stocks. Majority of outstanding voting shares is generally required unless other factors result in the gaining of control. So the acquisition of stock meaning, of course, the purchasing of stock over to that over that controlling point, which would typically be 51. and above, again, there’s pros and cons to that method, it might be a little bit easier to come to, rather than sitting down, you know, going line by line by the items, but again, you could be stuck in that case with taking on things that you don’t want, such as contracts and whatnot that the company that’s being purchased has adhered to, and contingent liabilities and those types of things. So obviously, either method has its pros and cons.