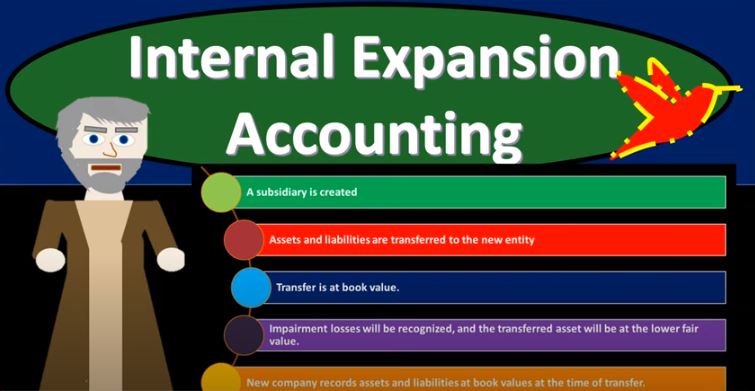 In this presentation, we will expand on the logistics of internal expansion, get ready to act, because it’s time to account with advanced financial accounting. We’re going to take a look now at the steps of the internal expansion. So note we have the two categories of expansion, the internal expansion and the external expansion, internal expansion with a company growing, we’re imagining the company growing, they can either grow internally make it another sub subsidiary, possibly, that would be owned by the parent company creating a parent subsidiary relationship internally, or has some kind of external expansion where we have two separate entities that are going to be together in some way, shape or form. So here, we’re talking about the internal expansion. So we have one company that is then thinking about expanding how are they going to put that expansion together? We’re thinking about the setting up then in this case of another legal entity such as a subsidiary, what steps for that? Well, first, you’re going to have a sub sub subsidiary B. created. So you get the parent company is going to be creating the subsidiary, then we have assets and liabilities are transferred to the new entity. So we’re imagining we have one company that wants to expand possibly have another division or another location that they will be expanding into. They make this subsidiary so they another legal entity created, we typically will think of another corporation that is owned by the prior Corporation, parent subsidiary relationship, the assets and liabilities that are going to be controlled or be part of that new segment are going to be transferred from the parent company now to the subsidiary company. And the key point here is that it’s going to be transferred at book value. And you might be thinking after looking at the external expansion, where you have two separate entities that are coming together and the need for us to then use the basically the acquisition method treat it basically like a sale happening.

At that point in time. You might say, hey, look, if a new entity is being created, why is it the case that we’re going to be putting In the book value into that new entity, whereas if we had two separate entities, we used an acquisition method. And note here that you can think of it as a kind of market type of transaction. If you have two separate entities that are coming together, then you basically kind of have a sale, you can think of it as basically some type of sale or market transaction, because you have two separate entities that have basically conflicting interests, oftentimes, within the merging process. And therefore you have a market type of transaction happening here. Although we have a new we have a new entity that’s being created. There’s not really two sides of a negotiation process happening when it goes on. It’s just it’s just one management management of one company is now saying I think logistically or for whatever reason, possibly for tax purposes, possibly just in terms of liability purposes, or some of the reasons we talked about before, we think that we should have another entity that we should be controlling. They’re not negotiating with someone else about basically the price of what that kind of transaction to negotiation will be. So that’s that’s basically the argument for in this type of situation, the creation of a new entity and not having to revalue all of the assets at the fair market value. So keep that distinct.

So that’s going to be you know, a key component, it’s useful to keep in your mind the rationale as to, you know, possibly in your own mind, just think about why it might be the case, in some cases that you would need to be revaluing things when you create a new entity, such as when you have two entities coming together most of the time using the acquisition method as opposed to when you’re expanding internally, even if creating a new entity, then at that point in time, you may be transferring the assets from one entity to another, but using the book the book value instead of the instead of reevaluating. However, if there are impairment losses, those are going to be recognized and the transferred assets will be at the lower fair value. So in other words, if we’re transferring assets we can imagine like property, plant and equipment In that we’re transferring over. And if we know that that property plant and equipment is actually valued at less than the book value, then we would have to recognize the loss and then transfer that value over. That would be the lower of either the fair value or the book value. And that coincides with like the conservative principle, which is basically the idea that we really don’t want to be overstating from a financial standpoint, from like a regulatory standpoint, that we don’t want to be overstating the assets. So typically, something like property, plant and equipment, for example, was typically going to be putting those on the books at the book value, which is the cost minus the depreciation However, if there’s an impairment, if we know that there’s been a permanent reduction, for example, then we may need to go in there and have the impairment loss so that we are more conservative in that we’re reporting to our reader. The lower the lowering of the assets, we’re not overstating the assets.

So typically, from a regulatory standpoint, just the general rule That we would we would prefer to have the assets be be be not err on the side of understanding an overstatement, generally with would be the conservative concept. So if it has then been impaired, just to be in alignment with standard type of accounting principles to be in alignment with a conservative principle, we would typically record the loss for that activity, new company record, record assets and liabilities at book values at the time of transfer. So they’re going to be recorded at book value at the time of transfer. So, let’s visualize this one more time. You’ve got the parent company, the parent company wants to expand, they want a separate legal entity so they create a separate legal entity. And then they’re going to take the assets that were in the parent company and liabilities and transfer them into the separate legal entity that transfer now happening at book value because there’s no arm length transaction. That’s how I would think of it in terms of why it’s at book value as opposed to a fair market value. There’s no market transaction. To one entity that is now becoming basically two entities is no negotiation happening at that point in time. However, if there are impairments to be in alignment with standard accounting rules, then typically we would have to write down the assets in accordance with the conservative principle and record that at the at the lower amount after having written it down here. So but basically, it’s going to be on the books at the fair value for the subsidiary