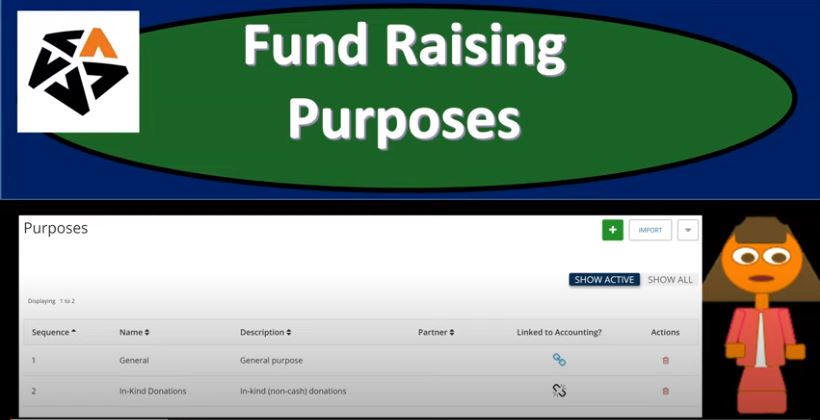 A couple things we need with those donations, of course, is to track those donations and be able to record them from an accounting standpoint. So we want to record them from an accounting standpoint, track them so that we can give the donation reporting to the donors as well. So to do this, if you if you think about this, it’s similar to a for profit organization, where you’re going to have the donations happening or an a for profit, you’re gonna have revenue, right and the revenue and you have service items, and inventory items. So when people give you money for a for profit, it’s because you gave them something typically as being a service or goods.

When we talk about the not for profit organization, we have a similar process is similar, we need a similar type of transaction document. Now the transaction documents for a for profit are going to be the invoice and something like a sales receipt that you can imagine giving at the point in time of the donor of the transaction happening. So like at a cash register, you get a receipt, a sales receipt type of transaction. So when we go in, and when we think about accounting software, oftentimes you think in terms of forms, such as that the forums are the things that are oftentimes will be generating the actual reporting on the accounting side.

So similar to a transaction happening, but it’s a donation, we didn’t give anything back except our time. And then they gave us money, that’s going to be a donation, which is kind of like a sales receipt you might see in a QuickBooks type of setup. And then pledges are going to be similar to kind of like an invoice because an invoice would mean that we did work we build someone haven’t got to pay yet. So a pledge would be the same thing they’re promising to pay us in the future. Again, we didn’t do work necessarily, right. It’s a donation in the future, they’re pledging to give us money at some point in the future.

All right, so that for to do that to populate those forums, we want to set up something similar to service items, something similar, if we did bookkeeping or landscaping, we might set up the service item, as you know, our landscaping service or this or that, if we sold inventory, then we’d have the inventory items. So we’re going to be setting up then our purposes over here that’ll help us to populate the forms for the major revenue forms like the contribution and pledges. So we’re going to go to purposes up top purposes. So 100 donations, and then purposes, we have two are the defaults here. So we got in kind donations, I’m going to go ahead and delete the second one that you could see, it’s not linked to anything at this point, I’m going to delete that one, I think that’s kind of an example one.

So you know, you could delete that, then you have the general purpose, that’s going to be our default kind of donation. So I’m going to go into the general purpose. And you can keep you could expect this to be like the norm right so far if our organization or organization is is has two goals, we’ve got the education and we got the community service. Now if someone just gives us money, then we expect that we can spend them that money any way we want in order to achieve those objectives that we have, which are our programs and then of course the supporting necessities of the admin and whatnot in fundraising in order to support those programs.

So I’m going to say general basically means that right if we’re using just general people just gave us money, they say hey, I know what you know your objective you could spend the money in any way you want. And here it is, as long as it’s going into you know the purpose that you have set up the the not for profit to be doing. And so and then of course if they give us money and put restrictions on it, that’s when we’re gonna have restricted items. So the so the general item would be most of us that would what we would hope to be most of us people will be given us money for not for profits purpose and not giving us any further restrictions on how to use that beyond the use of our not for profit So I’m going to keep the name general description.

We’re going to say general purpose. And then I’m going to scroll on down. And you’ll note that the accounts now pick the account 400. And that is actually, the restricted accounts, I think it was 410 4010. Is it contributions restricted? Now, no, you don’t really have a drop down when you first start. But if you start typing in, like 4000s, that’s where the income start items are. So if I just put a four, then I can then get our information. Or if I was to start to type in contributions, we’ll start to get the drop down. And that should give us enough to populate this. So I’m going to say 4010. And then the fund that we’re going to put this in is going to be unrestricted.

So we’d have the contact, which is basically a customer or donor, we would say, then, the purpose, we can select a purpose here, and this is where I’m going to put the general all we have right now is the general meaning the donations are just going to be the general donations will put in more donation restrictions later for restricted donations if someone gives us money and restricted in some way, but right now we’re doing say, a donation, it’s just going to be picking that General, that means that when we do the contribution, basically journal entry standpoint, cash is going to go up, this thing is kind of like the item for like a QuickBooks which is going to be driving the other side of the transaction, which means it’s going to be going into that income account, the income account that’s unrestricted.

And then we also said through this line item, that that general category is going to be going to the unrestricted, unrestricted category or Fund, which will allow us to break out between restricted and unrestricted on the income statement. So you’ll see how easy it is then to make this contribution form if someone was to give us a contribution, you know, you don’t need any expertise to just basically fill this out Why? Because we’ve already set up all the difficult components, we’ve set up how to put that you set up a general ledger account, the funds, and then any tags. And then we set up these items, which are kind of like the inventory or service items for not for profit organization. So that the collection of the donations very easy, you just enter the contact, and you can enter this information, the transaction should take place and record itself.

And we’ll talk more about completing this form later. And then, at the end, we don’t need to know anything about the setup process to do the data input. That’s the goal, someone who’s collecting donations, we don’t want them to have to know how the setup process happened, or how the how the records are going to be affected, which we discussed, you know how the two columns and broken out like that, all that’s going to be set up given our setup factor with the funds being set up correctly. And now these items so these are the critical building blocks to get the thing working right so that the data input will be easy. So we’ll talk more about data input in a future presentation.