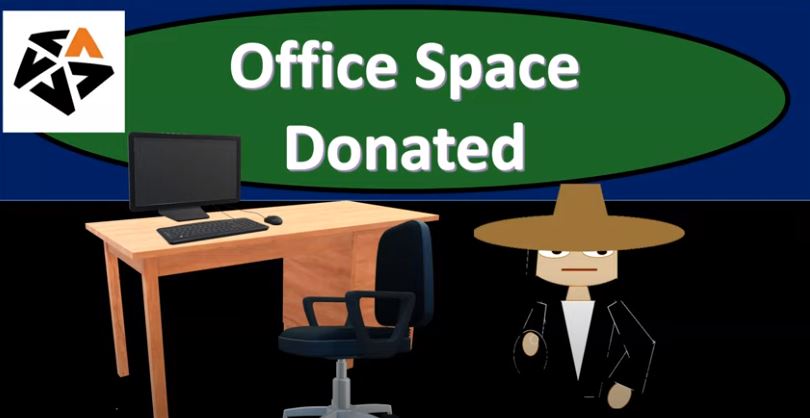 Now here, then that means there’s still a contribution, it’s a non cash contribution, we got something of value, therefore, we’re still going to want to increase the income account, that’s going to be the revenue account on from a journal entry standpoint, the 35,800 is going to be increasing with a credit if you think about debits and credits to contributions the other side then not go into cash, but it’s actually an expense. So what’s this going to look like in the end, this is what we want basically, the accounts to look like from a financial accounting standpoint, we want the revenue to be going up. So we have zero revenue, now it’s going to be going up.

And then instead of cash going up with a normal contributions, we have rent, we have basically rent expense is going up. So the rent then should be going up, there’s going to be no effect then on the net income. So the net income or the change in the debits and credits, or the or the change in net assets will not be affected here. But we want to record the two line items on the income statement revenue went up. And basically the expense went up revenue went up by the amount of the contribution, which we would have to determine using some kind of market method typically to see what the cost of normal renting of the facilities would be.

And then the expense went up for the equivalent amounts, because that’s going to be us consuming it with the use of the facilities, we’re using the facilities, we’re using the space, and therefore we have an expense related to it as well. So that’s going to be the transaction we’re looking for over here. Now, nobody also from from a accounting standpoint, or from a not for profit standpoint, want to be able to be tracking who gave us the contribution so that we can track that information and be able to provide them the reporting of that contribution in the future. So that’s another critical component for the not for profit to have that information to be tracked.

Now the expense amount, I’m actually going to put the expense amount here, which in this case, I’m going to say is the full amount and when we when we pull this over to the accounting record And what we would like to do then is apply this expense account over to the rent expense. So you’ll see what’s happening from an accounting standpoint, usually, the contribution form will be increasing cash, the other side going to the revenue account, which is going to be driven by this item. But what we would like to have is the cash not going up, but rather, we have the expense going up, and then the other side being income going up. So the income is going to be going up driven by the general form. And then of course, we’re going to try to put the expense with the expense amount here.

So then we have the non tax deductible amount, nothing there, we’re going to say we’re going to keep it there for that, for our purposes, non tax deductible note, you can have a note, and then salt credits, contacts, so we’re not going to put anything there. So that’s going to be it. So I’m going to say Save and add or save and close, I’m going to say Save and Close. Now, there’s actually no effect on the financial statements yet until we make the deposit. So let’s just check that out.

Now let’s go back to the first half, we’re going to make the deposit. Now note, there’s not going to be a deposit here, because we’re basically we want to a transaction to an expense, but we can expense the whole thing in this process. This is a really neat feature that we can do this here, we’re going to go in and say I’m going to make a deposit. And then I want to create the deposit. Again, it’s not going to be a deposit here because we expense the entire thing. But then we see our line items, our line item date 112 thousand 20, I’m going to keep that the same, I’m not gonna have a reference ID, the note is here, the donor donor one and and the purpose, general purpose, and then the amount being that 35,008.

So notice, we have the same kind of fields are populated in here, of course, and then the expense account the expense amount now being that 35,800. So that’s going to be important. And so we have the same kind of data input fields. Now note to be a little bit faster. Also, you could have, we could go directly to the deposit field. And you can enter multiple line items in this way and entered a little bit faster by going directly into these line items rather than go into the contribution field. And then over here. Also note that when you do the actual deposit into the bank, you want to be able to group it, this isn’t a deposit into the bank. But typically when you use a field like this is going to go into the bank, you want to be able to group those deposits in such a way that it’ll be in the bank and the same way as in your book.

So when you do the bank reconciliation that will work out. So we’ll talk more about that later. But in any case, if we scroll down, we’re going to choose our account. Now Now it’s going to go into this expense account. So if I hit the expense account drop down, we have this rent, so the rent is going to be the other side that’s going to be affected. And then you could choose a bank account, but nothing should be going into the bank account at this point in time. So we shouldn’t have anything going into the bank account. However, I’ll select the checking account for this point. So what’s going to happen when we record this, then it’s going to be increasing the rent expense by the amount of the expense to 35,800. And then the other side is going to be going to the income by the 35,800 driven by this general purpose item which kind of like the item for a for profit type of organization.

And we should be able to sort that report by the fund. So let’s save it and check it out. So I’m going to say save. And there we have it. Note that kind of jumps us over to the deposit screen which if you hit the contributions drop down you have contributions And then deposits. So these two are kind of related in that way. Now you can go back into the deposit screen by clicking on it, which I do need to do here because I got the wrong date. So this is the deposit date, I’d like to bring that back to January. So this is how easy it is to fix it or adjust it, you can go into it, we can go back up top, and I want to change the date field up top to be January 1 as well.

So note down here, this is the date of the contribution, this is the date of the deposit, those don’t necessarily be the same, you would think they’d be fairly close here, because we want to, you know, we don’t want to be holding on to the cash. But we’re going to say save. And so there we have it, there’s our deposit, I’m going to jump over to the income statement. Now, I’m going to refresh the screen by hitting this little button up top to refresh it, or you can click on the URL highlighting it and then hit enter, and it’ll refresh the screen. So now we have our information we’ve got the income went up by that 35,800. And the rent went up as well.

So now we have it broken out in kind of like the statement of activities here, where we would have the two columns, here it is down here with donor restrictions and without donor restrictions, unrestricted and restricted. So as we go, we’ll see how that will be broken out between those two categories. Let’s take a look at one more report. Let’s just go back into this report. Let’s go to the reports again. So I’m going to go to the reports drop down. And we also want to track the donations that have been given to us. So then we could say, Okay, what about the donor report. So I’m going to scroll down, I’m going to scroll down here, and we’ve got the other reports. And then the donation reports down here. So we have the donation by contact, that’s probably our most common report, I probably put that on the star as well, because that’ll be our information of the donations that have been given to that to us, if we open that up, then have our date range, I’m going to say that we want this year to date as well. So that looks good.

So now we’re breaking out that information by who gave us the money. So this report can help us with basically our reporting to the donors who gave us the money. Now in this case, it wasn’t money, but we still have the donation in this report. So that’s what we that’s what we want to see. Now also note we set this donor up fairly quickly, if we went back to the first tab, and we were going to track that information. We can also see it here where we go to the people tab, we’re going to go to the people, which is going to include the donors and the the vendors, we’re going to go to then to the contact list. So the contact list. So here’s our contact list. And we see down here by name, here’s our donor.

So if we wanted to add more detail here, or we could just basically add more of our donors here with the plus button. And if we go into the donor that we have added, we can give more information about them. So we can edit the details, edit the details of the donor, and we’ve got standard kind of contact information, first name, last name, the company the title, and then we have multiple phone numbers and all the contact information which of course we want to have, we want them on our newsletter and whatnot, the address the events, custom fields, and so on and so forth. So the the standard kind of things that you could that you would have available to you to populate the contact type of information field. So that’s going to be it for now. Let’s get out of here.