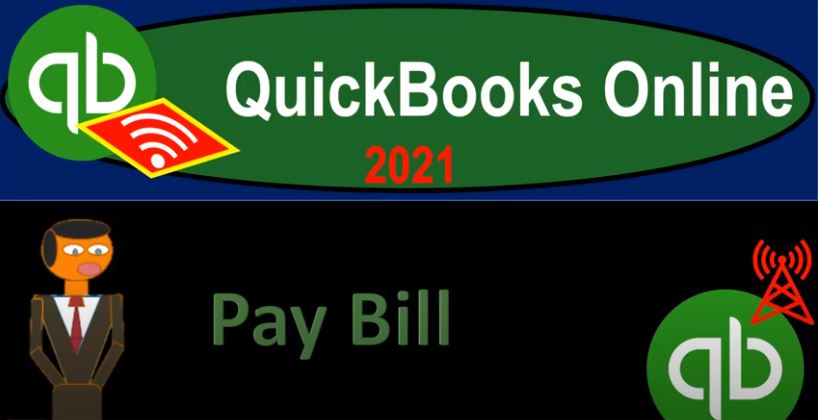 QuickBooks Online 2021. We’re going to enter a pay bill form. Let’s get into it with Intuit QuickBooks Online 2021. Here we are in our get great guitars practice file. Last time we entered some expenses and some check type forms. This time we’re going to enter a pay bill type form, the pay build type form is similar to a expense or cheque form in that it will be another form that’s going to be a decrease to the checking account. But it will be linked intimately to the bill item up top the bill form up top. Let’s first take a look at this in our flowchart in the desktop version.

You don’t need the desktop version to follow along here. But we just want to use the flow chart with it. Notice last time we entered some of our normal type of bills like a utility bill, phone bill, and so on and so forth. And those bills when I use the term bill there, I mean, we got something from somebody else a vendor that we have to pay within QuickBooks, then we have a distinguish of how we’re going to pay those items, we could pay them as we did last time by just simply writing a check, decreasing the checking account, and then recording the other side to wherever the bill should go, such as an expense account.

Or we can take those actual physical bills that we got an enter them into what QuickBooks calls a bill form. And if we entered it into the bill form, that means that we’re going to be increasing the accounts payable and the other side then is going to go to the expense or whatnot. And then we’ll have to pay the accounts payable with a pay bill form, which is in essence an expense or cheque type of form. But when linked intimately to the pay bill to the bill itself, that we entered the bill form.

So we’re going to go through all the checks that we did this time and do them in that format. In the following month, we’ll enter those same checks and like a bill type of format, and then we’ll use the pay bill kind of feature for it. This time, we’ll just glance at it, we’ll take a quick look at it. Because we entered a beginning balance in a bill format for our beginning balances in accounts payable for one of our major vendors as a bill. Now we’re going to pay that off using the pay bill format.

So we don’t really have at this point like a bill that we entered, what we did enter was a beginning balance that QuickBooks put in basically as a bill because it was an accounts payable, beginning balance to a vendor. And now we’re going to go in and pay the bill with the pay bill feature. So let’s minimize this. And we can see this as well, if I go to the expenses tab on the left hand side. And if we were to kind of organize what we owe, we could one, we could go to the vendor tab over here.

And we can get kind of a quick view on the right of what we owe. So there’s the 15,000. If we want to go into that Epiphone type item, then we see the 15,000. Here, if we wanted to then sort to the data, we could do so by hitting the filter button, sort by the bills and say we want to say All bills, and then apply that. And so there is our bill that we could then want to pay. So we could then hit the drop down and we could make a schedule a payment here. So let’s open up a few reports.

Before we do this, I’m going to right click up top and duplicate this tab, I’m going to right click up top again and duplicate the tab again. And we’re going to be opening up the balance sheet. And then I want to open up an accounts payable type of report on the right hand side. So let’s go to the balance sheet here. Let’s go down to the reports on the left hand side and reports.

And we’re going to open up our favorite report that being the balance sheet report opening up the balance sheet. And let’s range change it up top Indian at 1231 to one and then run that report. Closing the burger up top holding down control scrolling into about that one to 5%. And then let’s go to the second tab. And let’s look at a payable type of report here. Go into the reports down below.

We’re going to go to amount you owe we want an accounts payable type of report or a vendor report. So here’s who’s owes you. Then we got the sales and customers and then we have what you owe. So we could look at an accounts payable aging Detail Report. But I’m going to take a look at instead the vendor balance Detail Report. Let’s open the vendor balance detailed reports and range change it up top it says all dates, we’ll keep it at that close the hamburger. And there we have our 15,000 broken out by vendor which is only one vendor.

So just wanted to note that these other reports are another way that you could sort the information as to who you owe. So if we go to the balance sheet, for example, the common question would then be if you’re in the accounts payable department, how much do I owe people? What’s in accounts payable? And then we would ask, Well, you know, who are the people that we owe and how past due or the bills? Is there any way that we can delay the bill without being penalized? And which bills should we pay because we will be penalized if we don’t pay them soon.

And to do that to just see who owes you we could go to this report which breaks out who owes us we only have the One person at this point and it’s put together by the bill. Even though if I click on that bill, we set up this bill as part of the beginning balances the opening balance. So the other side went to opening, it was description, opening balance equity, and the system just put it to other miscellaneous expense back before the date that we started entering transactions, that being on 1231 2020, we’re going to start entering detail in 2021.

So in other words, this expense didn’t affect the income statement in the current time period did affect the permanent accounts of the accounts payable, which we are now paying off, closing this back out, let’s just go back to the first tab and do that, we’re going to go to the drop down. And I’m just going to go to the the pay bill under the vendors section. And this is going to be another kind of area where we can sort the open bills. So it’s another area that we can sort, you know who we owe. Now, obviously, we only have the one item here.

So it’s going to be fairly straightforward. If you’re in a larger company, again, you can have a whole department that that’s there to kind of manage who you need to pay, and try to pay them kind of as late as possible typically. And so let’s put the date here, as of I’m gonna hit the plus button, bring it back up to the 28th or the 29th, let’s say, and then we’ll have it you can either have the checks, if it’s not a check that I would, I would delete the check number there, so it doesn’t print a check.

And in that way, it could be somewhat something else like an electronic transfer if you don’t have the check number, for example. And then I’m going to be clicking on the bill that we’re going to be paying for pain, which will of course be the Epiphone I’m going to pay the entire thing. But if we were to pay something other than the entire thing, then of course, we can put the payment here, and we would still have part of the bill then outstanding. If that were then the case, what’s this going to do when we do it.

When we enter this, it says pay bill up top, that means it’s going to be of course, paying it with something like a check a check type of form, and then the other side is going to be going to the accounts payable. So anytime we see the pay bill, it means that we’re not going to hit an expense account or anything like that we’re decreasing the accounts payable. And if we want to know what actually happened, what we actually purchased, what expense account or asset account asset account was affected or liability account, when we entered the bill, we have to go back to the actual bill. So let’s go ahead and then pay this I’m going to say let’s save it and close it.

So save it and close it and then we’ll check it out back to the balance sheet up top. And let’s freshen up this report. And we’re gonna say in the checking account, if I go into the checking account, scroll down, we now have on the 29th, we got the pay bill check, there’s the 15,000. So notice, it is still a check it has the check number here for us at but it’s a special check.

And it’s indicated in the transaction type as a pay bill check. So that tells us both that it’s a check decrease to the checking account, but also that it’s connected to a pay bill and therefore, the other side of it will be going to the accounts payable, which of course is also indicated by the split item in accounts payable. If I click on any item here, it’s going to take us to the actual form. So if we go to the form, here’s the form that was paid off.

Now if I want to know the expense account, or income account or whatnot, or asset account, expense account or asset, typically that was affected, I can then go to the bill here connects to the bill. And that’s where the actual expense account was hit here. This being the other miscellaneous expense in the prior year, like we saw before, closing this back out, scrolling back up top going back to then our reports. And the other side of this is going to go to the accounts payable, which is here is now down to zero nothing’s in accounts payable, we paid it off now.

So there’s the 15,000, there’s the opening balance, we paid it off, now we’re at zero. So we have the bill, bill payment here, scrolling back up top. And then of course, if I go to my accounts payable report, it’s going to be removed here, once I see it, I’m going to say run the report again. And then it’s gone. If I want to see the detail, I can go up to the Customize reports, take a look at the filters. And say I would like to look at the the not just the unpaid but all and then say run that report. And so now we see it, of course the bill going in place and then the pay bill, that’s what this report should typically look like a bill happens.