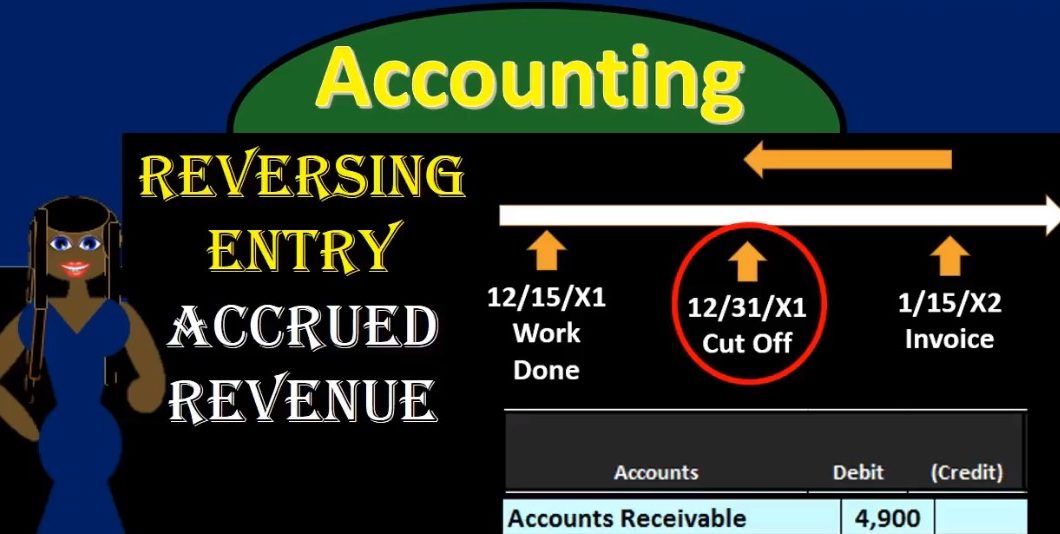 Those will be made the day after the financial statements have been generated in order to make those adjustments to some of the adjusting journal entries that in Need some adjustment in order to make our normal accounting process work. So this time, we’re going to talk about those reversing entries related to accrued revenue and why we might want to use them within our accounting process. We have an example here where we have work was done that the business has done, we’d have done work on 1215 of x one, we didn’t invoice the work until 115 of x two in the next year. So note that we have crossed over the cutoff date, the date of the financial statements between the time the work was done and the invoice was generated. This may happen because just as a normal part of the accounting process, because we did the work here, maybe we had to bill the client, see how much time was spent. So it may be natural that we don’t have the bill go out to a later time. 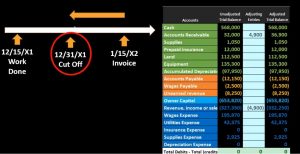 It is just a normal journal entry that happens during The accounting process whenever we do read and we do work on account, receiving receivable and increasing revenue, the only difference here being the reason it needed this adjustment is that the work was done before the invoice was sent out. And it just so happened that that surpassed the cutoff date that cutoff date landed in the middle. And therefore we needed to pull this this transaction back recording the revenue in the time period that the financial statements were covering. Then if we take a look at the invoice date, we also note that we have this same transaction still happening because when we pulled the transaction back in the adjusting process, we did not delete this transaction that happened at the date of the invoice. Therefore, at this point in time, we also recorded accounts receivable increase in accounts receivable. And we had the revenue increase in at this point in time therefore as of one point 15 of the same journal entry has been entered two times due to the adjusting process due to making our financial statements right, as of 1231. 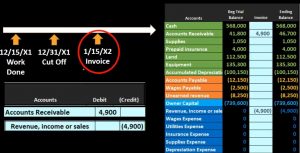 Then, if we have the reversing journal entry note the date of the reversing journal entry as of one, one x one, so we’re just going to do the exact opposite, we’re going to take it we’re going to debit the revenue, decreasing the revenue and credit accounts receivable. So what happened is we put it into accounts receivable, we increase revenue as of 1231 made the financial statements with that. And then right after that, the day after the financial statements are generated, we are then going to do this just reverse it out, reduce the revenue, reduce the accounts receivable The day after. And that will be a good system because it’ll it will reverse what we did as of 1231 and get back to the point in time that the books were at almost the problem with that, however, is that the rim but the revenue should have look funny, we almost never will debit a revenue account because we did revenue accounts only go up in the credit direction. So as of the first day of the new year, in this case, we have a debit in revenue, which is really weird, that would be negative revenue. That doesn’t make any sense.

However, it will make sense at the point in time of 115. The point in time that there the other journal entry was made, because the journal entry was debiting, the accounts receivable and crediting revenue, and therefore, this will then reverse it out, we’re going to that journal entry will reverse out and then pull the ball the amount back out, bringing it back down to zero, those two amounts will net out as of the date of the invoice until that invoice happens, it’s going to be out of balance, that thing will not look correct. And that’s just the price we pay just like it’s the price we pay when we do the adjusting journal entry process and we make the adjustment as of 1231 and ignore The fact that it’s not quite correct as of the day before 1231, or the day before that we’re making it right after the financial statement dates. This will have problems between, in this case January 1 to January 15. We’re just going to recognize that there is a problem there.

And note that it will be correct as of the date of January 15. And that will make it so that our adjusting department and reversing department can do their jobs have a simple system that we can put in place to reverse this journal entry, so that both of those departments don’t have to do anything too different. If you would like to know more about the adjusting process and the reversing process, we recommend taking a look at the book accounting instruction reference number 300, where we will have a reference to related topics so you can pick the topic you’re most interested in and see topics related to it. We also have links to instructional resources, such as more instructional videos and games. And test banks as well as other resources related to the tech so it can really act kind of as a guide to help you through some of these resources, many of them being free 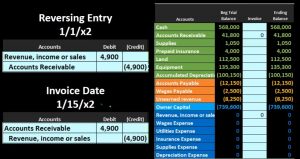