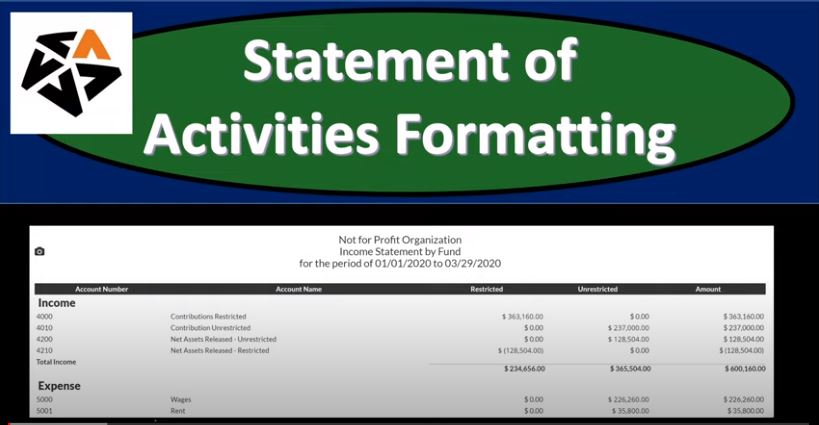 Now I’m going to duplicate this tab. So we got this report to the right, and then we can go back to the tab to the left to do stuff. So I’m going to right click on this tab up top, I’m going to duplicate this report. And so there we have it. Let’s change the date. Now I’m going to hit the drop down here, I’m going to say that we want to have this let’s make it a custom date. This time, let’s just take a look at January, bring this on back to January. So I’ll say January 31, or I’m sorry, January 1, gotta go from the first and then to the 31st. So it’s got to start at the beginning. And then in like at the end of the month. So then we’re going to apply that. Now we’re going to add the total column. So we’re gonna hit the report layout, and we want to add the total. So we’ve seen this multiple times in the past, when I hit the total mana, make sure to apply it so that it will then have the total. So there’s our total amount.

This is kind of the standard report we’ve been working with, let’s think of we can now save this report. So I’d like to save it. So I’m going to say save. And I’d really like to save it as the name here, I might want to save it as a statement of activities. So I’m going to say let’s save it as a statement of activities. And that’ll kind of distinguish it from the income statement. And I’m going to say this one’s going to be our worksheet, meaning this is kind of like our internal report. And we’ll we’ll then think about an external report that will use for external purposes. And we’ll talk more about that in a in a second. Also note that that changed the name up top.

So that’s how you change the name here. So now we have the statement of activities worksheet, it rather than an income statement. So if that’s, you know, if that’s something for external reporting, oftentimes a not for profit might be called the statement of activities, rather than the income statement. So now we can jump right into this report anytime we want to. So how do we do that? Let’s check it out. Let’s say okay, and we’re gonna go to the reports here. And I’m just going to go open this report back up, and I’m going to do that by scrolling down, I’m going to say scroll down. And then I want the saved report. So here’s our saved item. So I’m going to go ahead and open up the saved report. And that will give us our our reports, we can just go over there and jump over there and open it back up. And that’ll give us our formatting the statement of activities, and so on and so forth.

Now, the reason I’m going to say this is going to be our worksheet report is because we’re breaking out here, you can see that we have the contributions restricted and unrestricted. Now we can imagine a situation where maybe we want to not have those two columns and just break them out or not have those two accounts, those two rows, and break them out by column here, and then show the total, basically between them. On the right side. Same with these two items, not sure have these two broken out. So I think it’s a nice double check in my worksheet. But maybe I don’t want to report it in that format out for my end report. So to do that, let’s let’s right click on this tab up top, I’m going to duplicate this tab, I’m going to go back to the tab to the left, and I’m going to open up another income statement that I’m then going to format again, and then we’ll see if we can adjust this formatting.

So we might want to say can I use classes over here. So let’s go back to the first tab. To do that. I’m sorry, not classes, sub categories. So we have classes or tags are being used already. We’re going to use subcategories. So then we’re going to go to the fund accounting. Let’s take a look at our account list. So we’ll say let’s take a look at the account list here. And we’ll see that if we scroll down to the income statement accounts That we have these two income statement accounts. Now when if I was to make another account and make these basically sub accounts of it, let’s try it. Now I’d like to make the parent account 4000.

So there we have that, and let’s say save. And then let’s do that. For the other one. Let’s say I also want to take this one and make it a sub account. So by hitting the little sub account, tick mark there, have 4000 as well 4002 contributions, and then save that and it should move them over, you can see it, it basically moves them over to the sub accounts category. Let’s see what that does to our statement. So if I then go over here, and I say that refresh this, I’m going to say refresh. And what I’m looking for is I’m trying to get these two accounts to be in one see now I’ve got these two accounts are in one because we’re not showing the sub accounts. So that’s what I’d like to see on my final worksheet, but I kind of like seeing the breakout of the two accounts on my my worksheet. So this is this is going to be my final reporting.

But on the worksheet, I’d like to see the breakout. So on the worksheet tab, this is the one that’s going to be my worksheet, if I update that one, then it’s going to it’s going to combine those two as well. So what I’d like to say it I don’t, I don’t want to combine them on my worksheet, I’m gonna hit the drop down over here. And I’m gonna say, I’d like to see the sub accounts. So I want to say see the sub accounts, and apply that out. And, and that’ll give me now now we see contributions in the two sub accounts. So to me, I kind of like that breakout. So now it gives me that that full breakout. And I can kind of check this in two different ways, both by two different accounts. And by the categorization, so I can see the actual accounts that I hit.

Whereas if they’re squished together in that 4000, it looks like they’re both going to 4000, they’re not, they’re going to these two separate accounts, that’s useful for my worksheet. And it’s useful for me to see the two accounts in this format when I give it to external users. Now let’s do the same thing for these two. So I’d like to do the same thing here, just squishing these together to the net assets released. So I’m going to say right, let’s go to the first tab, let’s say that we now have this net asset, so I want to make another one. And I’ll make it, I’d kind of like to make that one for two as well. So let’s see if we change this one to four to change this to 4205. Again, so we’ll say for 205 and then save that. And then let’s make another one, which is for 200. So it’s gonna be for 200. And then I’m not gonna have a, cuz it’s gonna be blank, nothing, there’s not gonna be any accounts. It’s just a parent account, it’s just going to be called net assets released. And then we’ll, we’ll make that that’s the parent account.

So now we got those put together, net assets released for external use. Again, it looks like it’s all in for 200. It’s not it’s in the sub accounts. So this is my external worksheet with regards to the to my worksheet. However, if I, if I update this one, you’ll note that now it’s going to break out that sub categorization. So I can see the actual accounts that are hit. So when I actually post to them and look at these accounts, I can see them. But then when I present them, there’ll be they’ll be grouped together under under this account. Let’s go ahead and save this. So I’m gonna, I’m gonna save this, I’m going to save it as the same item here. So I saved my changes and the changes that we had to our worksheet, then I’m going to go to the prior tab, and I’m going to adjust the name, I’m going to save this too, because I want to rename it and then have this there for external reporting.

So then I’m just going to say save. And I want to make this the statement of activities but not a worksheet, that’s it’s just a statement of activities. This is for external reporting, which is, you know, the not for profit name for the income statement statement of activities. And so I’m going to save boom, that’s the title. Let’s save that. And then if we go back to our prior tab now, and so I’m in the first tab, if we go to our reports, and then we go down to the to the saved reports, then now we have our two reports. So now I can go back and forth. And I can say, Okay, if I’m working on this stuff, I’m going to be here. And then if I if I want to give this for external use, I can be here.

And I don’t have to reformat everything I already know, you know what the format is. And if my worksheet is all set up correctly, then this one, that’s just going to take away the sub accounts should be set up correctly. So that’s how I might put this together. here’s here’s the back to the one that we’re going to give for external use looks like this has the sub accounts grouped together. And then here’s the one for internal use, which basically has this more detail so we can see the accounts that will be affected. Okay, so next time we’re actually going to we’re going to start exporting this information and grouping it together like we might do if we were to present it to somebody such as the board. So that’s it for now. Let’s get out of here.