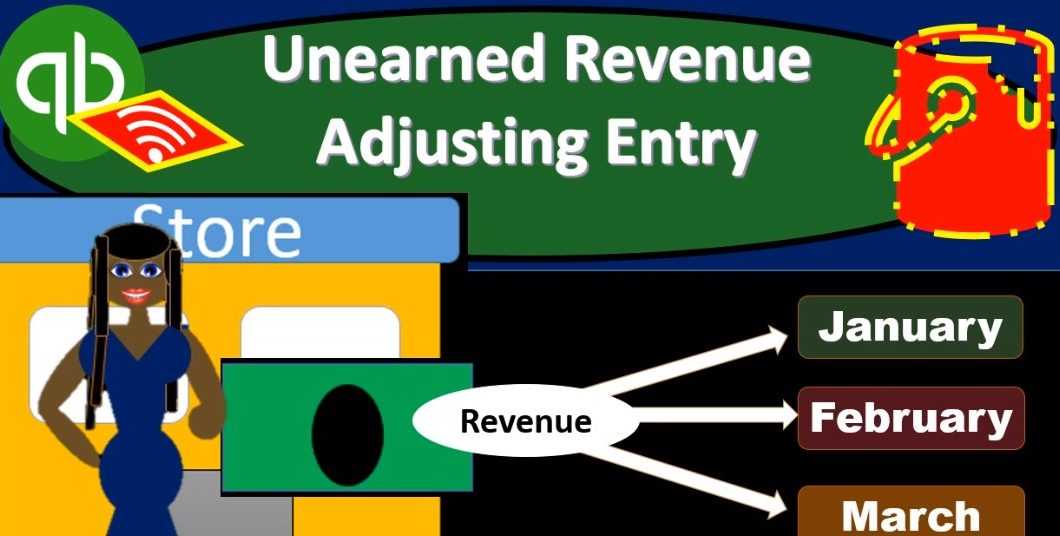 Now, if you’ve taken financial accounting, you might have like a preconceived notion of what the adjusting journal entry will be for the unearned revenue, and we’re going to totally like shatter that here is going to be a little bit different, not because what you learned in financial accounting is wrong. But because we’re using the unearned revenue in a different type of way, one that I want to show you, because it’s going to be something you’ll see in practice in your part, and you may never have seen it in in your financial accounting, but it’s actually very practical from a logistical standpoint. And you’ll see it if you work with with enough QuickBooks type files.

So for example, in practice then, normally what happens with these unearned revenues, and they only have usually happens with other in revenues when you have kind of an unusual situation or you have an industry that deals with unearned revenues a lot. So remember what happens usually It is that we do the work before we build the client invoicing, the client getting paid later. Or we do the work at the same time, like a restaurant sales receipt form being used. But it’s possible under weird situations or funny industries, where they actually pay us before we do anything. They pay us money before we do anything like a concert, you know, they pay us money before we have the concert. Or we might have that situation and a lot of subscriptions, like apps, apps applications are that in that format as well.

So there’s actually more industries that have kind of have that model where they might get money before they provide anything newspaper newspapers, where you have a subscription or something like that, and, and magazines and so on and so forth. Also, if you have a situation where you’re renting, then if you rent like apartment buildings, and that’s how you make money. You may have a deposit the deposit then it’s kind of like a pre payment. It’s in some ways you’re getting money, and they haven’t done anything.

Therefore you owe the money back Or they, they have to use or break something in the apartment, and then you get to keep the money like the deposit. or in our case, we had a deposit on something we’re going to purchase. So in our case, you’ll recall that someone’s going to buy something that’s fairly expensive like a guitar, they’re going to come into our stores and like this guitar, and we’re saying, that’s great. Let’s tell you that when they go, No, I don’t like the color. And we go, all right, well, we’ll buy you another one. But just to make sure you’re committed because it’s an expensive guitar, give us a down payment. So then they pay us before we get the guitar, just so they were sure that they’re committed to buying the guitar by giving us the money beforehand. So that’s, that’s going to be kind of the scenarios.

Now typically, if we were to record that into the system, like if I was recording like magazine sales or something like that, and I was in an industry where I always got pre paid. Normally you would think that you would increase the unearned revenue liability account would be going up when we got paid and the other side then would be going into cash at the time.

We got paid this At the end of the time period, at the end of the month, we’d have to then go through all the unearned revenue and decide how much of that revenue has actually been earned how many papers we actually gave to the customers and therefore earned it through giving them the paper, reduce the unearned revenue at this point in time, and then record the revenue at the point in time we earned it when we delivered the papers. So that would be the typical way that that’s how you’re going to see it in normal financial accounting practices.

Now the problem with that, however, is the fact that if I if I record it as unearned revenue, I’m not tracking it with the system that QuickBooks has been used to track this information, because the thing that tracks customers is under the the account of accounts receivable. The accounts receivable has special reports that track the information, buy it for customers for it. Therefore, we would like to have that tracking method to be able to track you know, who gave us the deposit and whatnot. And typically, you’ll do that With accounts receivable, so that means in practice, it’s logistically nice to not record a liability down here, where i, where i don’t have QuickBooks special tracking mechanism, but rather record a negative receivable if I got paid in advance payment, because then I can tie out the negative receivable to the invoice I’m going to make later. more easily. 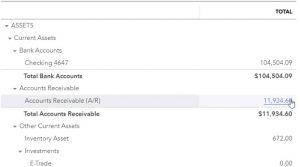 I can’t do that if I don’t if I don’t make the negative payment in receivable and make some other reports. So typically, you’ll often see that being the case. So in our case, then, when we put the deposit on the books we didn’t recall, enter or increase an account called liabilities down here unearned revenue, we instead made a negative receivable as you’ll often see in the system, and what all we’re going to do now is say, not that it’s not that we’ve earned it yet, because we haven’t given that guitar, we just want to take it out of a negative receivable which is not correct for financial statement purposes and put it where it should be, which is a liability.

That’s what we’re going to do here. So let’s see this more fully. Let’s go back to the to the tab again, I’m going to scroll back down, we’re going to open up our customer balance Detail Report. So I’m going to go back down to the reports on the left hand side, I’m going to type in this time instead of scrolling down to find it, because I think it’ll be a little bit faster. It’s going to be the cus dummer. Balance detail, customer balance, detailed report. Close up the old hamburger. And when I make it go back up to that 125 so we can see that report a bit more clearly. And dates look OK. So then I’m going to be scrolling down, and I’m looking at the end balances.

Then we’re going to select the drop down to see what our options are. We only got a couple we’re going to go to the journal entry. We’re going to enter the journal entry as with all adjusting journal entries as of the cutoff date Oh to 29 to zero We’re then going to say that this isn’t a DJ for adjusting entry. This is going to be an increase and we said it was an increase for the for the 300. I think it was like 300 pretty sure Yep. 300 totally right 300 there. And then the other side is going to be going to the to the accounts receivable, accounts receivable. Okay. Now note, I have no tab to add the customer name here. And so I’m going to have to adjust this you would think in some in some way because I usually they want us to add the customer, I’m going to go ahead and save it. And they did, they did, let me record it.

I’m going to go back up top and go to the split field and edit it and take a look at the journal entry. So unearned revenue isn’t going up with a credit and they put the other side to interest expense. That’s not the It’s not what I went to should be going to accounts receivable I could have sworn I picked accounts receivable. And I’m just going to see if they let me record it without a customer just to just to see, oftentimes they said nope, something’s not quite right. When you use accounts receivable you must choose a customer. So we’re going to say, All right, let’s pick a customer. The customer here was string music. So we’re going to go that’s the one that’s the one we want string music.

Okay, and note why we have to choose the customer because they need this other report this report here to tie out to the the count on the balance sheet or trial balance for accounts receivable. So we’re going to say How about that? Is that okay? Will that work? And they still say no, because it didn’t save my customer name. So I’m going to say why didn’t it save customer names String music that’s the one I want, tab. Now there were, I think it was doing some little funny I refresh to the screen by the way when it was doing that, and then I just entered it again. And now it seems to be sticking.

So let’s try it again. Save and Close. They’re gonna let me do it. It is all right, I knew it. I knew it. Then I’m going to go to the balance sheet. Let’s freshen up the screen, close up the burger, hold down Control, scroll back up to that 125 and then we see down here in the accounts receivable opening up the accounts receivable scrolling down to the bottom of it. We have our journal entries here and this second journal entry or this one should be increasing the 300.

So it’s increasing the accounts receivable scrolling back up, going back to our balance sheet report. The other side being down here in the liabilities. Notice this is another one. The way we’re doing here not adjusting it’s not affecting the profit and loss like a lot of the adjusting entries typically will because we’re using kind of an account to track receivable in our case here, so we’re going to go back down and we’re going to say that the other side is in unearned revenue there it is increasing the liability. So that’s going to be the other side of it.

There we have that back to this report again, we see now that we have the 300. And of course, we took it out with an adjusting journal entry to bring the balance to four string guitar down to zero. That’s why we had to assign the customer and when we do the reverse and entry, we’re just simply going to reverse that we’re going to put it back in place. So that when the actual guitar comes, we can make an invoice and the invoice will then tie out and we can apply this credit, this kind of like overpayment, the credit, the negative, the deposit to the invoice that we will create as we saw in one of our prior transactions up here when we have that deposit going on.