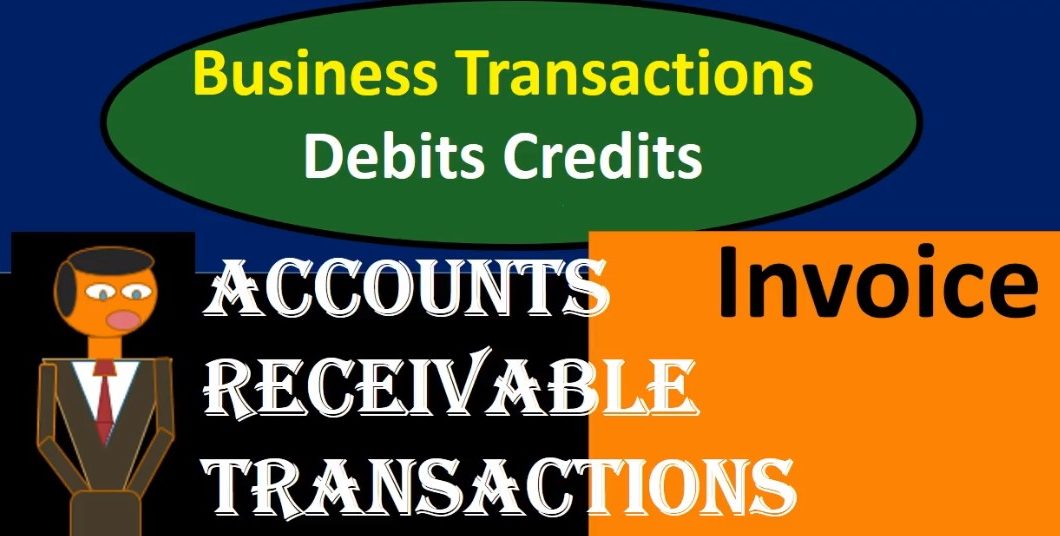 We will then be posting them not to the general ledger but to this worksheet here so that we can see the quick calculation of the beginning balance and what is happening to the individual accounts as well. account types, in that we have the accounts categorized, as is the case for all trial balances. accounts have been in order that order been assets in this case in green, the liabilities in orange of the equity, light blue and the income statement accounts of Revenue and Expense Type accounts. first transaction perform work on account for $10,000. First question we will always ask is cash affected? In this case? No, we didn’t get cash and the key term here is on account. Be aware of that key term. In real life, we would know what would be happening here meaning we did work. If we were a bookkeeper, we did the bookkeeping, and then we sent out the bill have not yet received the cash and a problem that’s in a book. They have to indicate that in some way, often a very generic type of thing here where we’re just a service company and we did And the key term being on account, on account will mean either accounts receivable or accounts payable. 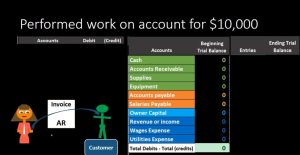 When working with the accounts receivable or sales cycle as we are here. The account when you see on account will be accounts receivable. Some books might use the term on credit and in practice, you might hear the term term credit. The reason many books avoid that term is because we don’t want to confuse it or the book doesn’t want to confuse it confuse it with the idea of debits and credits, mixing up the meaning of what a debit and a credit is. But when you hear that term in real life, you got to know what the distinction is when someone says they’re going to have something on credit versus debiting or crediting the account within a journal entry. If cash is not affected, then we’re going to ask what did we received and what we got in this case is an IOU. We got people owing us money, we got a promise to pay at some point. In the future, that’s going to be our accounts receivable account. It’s our second favorite asset account, not as good as cash, but we like people owing us money. It therefore, because it’s an asset has a debit balance, we need to make it to go up because people owe us more money.

So how do we make an account to go up, we do the same thing to it as its normal balance, it being an asset, having a normal debit balance means we will do the same thing of another debit. So we’re going to debit the accounts receivable and that means we are going to have to credit something for the same amount. Why are people going to pay us 10,000 in the future, because we did the work today we performed the work today and therefore earned revenue or income, the credit going to revenue or income. We already know that if we know that it’s going to be revenue or income that we will be crediting it because we debited the accounts receivable but we want to think through that. Remember that revenue is And income statement account revenue and expenses being the income statement accounts and income statement accounts only go in one direction, revenue accounts going up in the credit direction.

Therefore, we’re going to do the same thing to it, which in this case is another credit. Also note that according to the revenue recognition principle, we’re recording revenue here when the work was done, although we have not yet received the cash, and typically this would be like an invoice transaction, the transaction would be recorded when invoicing the client as is shown here. So if we post this out, we’re going to say that the accounts receivable goes from zero up in the debit direction by 10,000. To 10,000, the revenue starts at zero goes up in the credit direction by 10,000 to 10,000. Remember here that we are representing debits and credits in two columns and the credits with brackets on the journal entry but when posting, we’re showing In the credits as bracketed numbers only, not in a separate column and debited numbers without brackets. 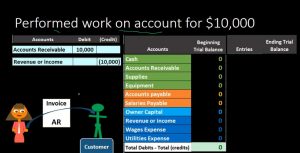 This will save a lot of room when we post to a worksheet like this. And that’s why we will be working with this. In practice, it will save a lot of time. If you’re working with Excel, which I highly recommend doing, then it’ll save a lot of functionality in the formulas as well. The effect on the accounting equation assets increasing as cash goes up, liabilities are remaining the same and equity going up because net income is going up, net income going up because revenues going up. net income calculated as revenue minus expenses, net income, increasing equity. Here we see that that net income is increasing due to revenue increasing net income starting at zero going up by that 10,000 calculated as the 10,000 minus the zero minus the zero. Remember that that brackets does not mean negative number for us when considering this in the format of debits and credits, it represents a credit.

It represents revenue over the debits the credit of revenue over the debits of expenses by net income of 10,000. Next transaction received cash on account 10,001st question we’re going to ask is cash affected? We’re going to say yes, we’re going to say received cash, is it going up or down? up? key word received? How do we make something go up? We do the same thing to it as its normal balance, which in this case would be a debit to an asset account which has a debit normal balance, increasing cash. Now when first seen this many times, when we start working with journal entries, we started to think, wait a sec is cash really affected in this because I also see the key term on account. And I started to think that when I see on account, that means cash isn’t affected it means that some other accounts receivable or payable thing is happening here.

And when we are purchasing something on account, that will be the case because we purchase in the last example, we purchase something on account, or in this case, we did work on account, and therefore, the account was affected rather than cash. But in the second half of that transaction, what’s happening is we’re going to receive cash for the the amount that was owed to us, in this case, what was in the on account account of accounts receivable. So bottom line, don’t let that throw you off. If it says received cash, then we received cash think about that first, and then we’ll think about why did we get cash we got a credit something, what are we going to credit? We can’t credit revenue because it says on account and that indicates that we didn’t do the work at this point in time. That indicates that we did the work sometime in the past and if we see This this transaction without having first seen the prior transaction, we’ve got to be able to look at this and say, What must have happened in the past. What must have happened in the past is that true prior transaction.

That’s how the accounts receivable works. We do work on account we invoice the client, we put that money into this account called or that receivable that IOU into this account called accounts receivable. It represented here with this 10,000. Now once we get paid, that 10,000 needs to decrease, so the credit is going to go to that accounts receivable, it’s going to reduce that 10,000 back down to zero. So if we post this out, we see the 10,000 debit to cash increasing cash from zero up by 10,000 to 10,000. Accounts Receivable then going down with a credit it being a debit account, we doing the opposite thing, crediting it bringing that balance down to zero. The effect on the accounting equation assets going up However assets also going down one asset increasing one asset decreasing. In essence, we’re getting a better asset and losing the worst or asset. We’re losing the fact that people owe us money and getting the fact that we have now got the money. There’s no effect on the liabilities and no effect on equity for look at the net income, no effect on net income. 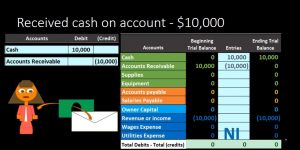