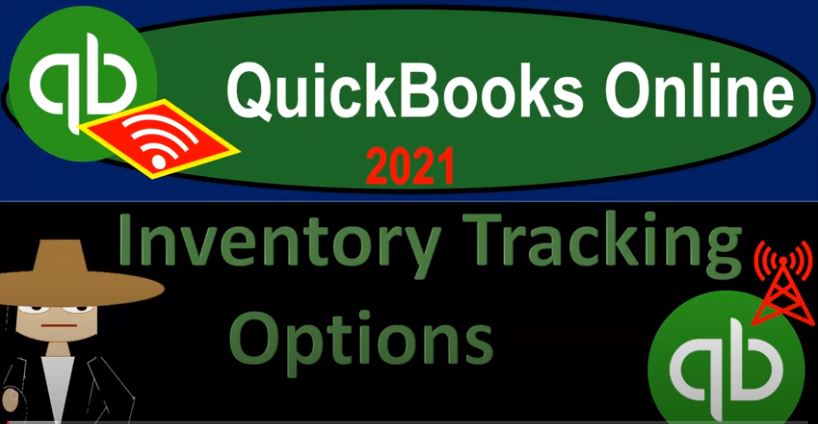 QuickBooks Online 2021 inventory tracking options. Let’s get into it with Intuit QuickBooks Online 2021. Here we are in our get great guitars practice file. Last time we entered some items for our service items, we can check those out by going to the sales tab on the left hand side, then the products and services up top. These are the service items that we entered that would then be helpful or used to populate things like invoices and sales receipts.

Now we want to think about the process of inventory. Note that if you have inventory, then you got to think about how you’re going to be tracking the inventory. And this will vary vary. This will be different from company to company if you haven’t had an idea or don’t have the concept of inventory flow assumptions, things like first in first out last In First Out weighted average method and specific identification type methods, we do have a course on inventory flow assumptions, and you may want to just take a look at that and think about how you first want to be tracking the inventory before adding it to the system.

In other words, if you have inventory, you’re not really required necessarily to track the inventory within the quickbooks online system, it could be a useful tool to do so. But it also adds some complications to it as well. And that would be the difference. In essence between using the QuickBooks system if you add the inventory counting the units of inventory in the QuickBooks system, you’ll basically be using a perpetual inventory system. And the default flow assumption will be first in first out type of flow assumption. If however, you don’t want to track the the item inventory items within QuickBooks because it’s too burdensome to do.

So then you can use what’s called a periodic inventory system, possibly track this the inventory outside of QuickBooks, and then do periodic adjustments that will line up to say a physical count that you will do from time to time, possibly nightly, possibly weekly, possibly monthly. So let’s just think about those two types of systems. First, let’s just think about what will happen when we create an invoice. So notice if I was to create an invoice up top, and then use one of our items down here to create the invoice down below, if that item, as is the case here is a service item.

So if I hit the service item down below, and we’re gonna say Okay, so now we got 140, it’s pretty straightforward transaction this this item will drive the transaction, the fact that it is an invoice means accounts receivable is going to go up, the other one’s going to be driving by driven by this service transaction item, which is going to go to revenue type of account. If we then add an inventory item, and we’re tracking the inventory through the system, then when we enter the invoice, we’re still gonna have an increase in accounts receivable, this will still have an impact on the income and account.

But we will also have to be decreasing the inventory at that point in time for the cost of the inventory and record a cost of goods sold those two items not being shown typically on the invoice but being driven than by the inventory item here. So you can see that the transaction that takes place, when we record the sales transaction is a lot more complex. Once we have the inventory item in place. Let’s just take a look at our flow chart over here. And this is on QuickBooks desktop just to consider our options as well.

For example, if you’re saying I’m going to, you know, buy so many items each each night or each week or whatever, then I’m going to sell them and then I’ll count how many units I have at the end of the time period. And that’ll tell me how many units I have sold because it’ll be the difference between how many I had at the beginning of the day, and how many I had at the end of the gate of the day. That’s basically using a periodic system.

And instead, record it as one lump sum entry at the end of the period, whether that be the end of the night based on your physical count the end of the week, based on your physical count, or say, the end of the month. And that’s a different way that you can do it, which would be a little bit more simple within QuickBooks. But it won’t give you that added detail of tracking the inventory items within the system, you would have to do so in some other way, possibly just with a physical account type of format. So if we go back into QuickBooks, then online, let’s close this out. Let’s close this out and say do you want I’m gonna say yes, I want to leave.

And then if I go back into the sales item on the left, and the products and services, if you were to do the periodic system, then you can you can enter your your inventory items in a similar fashion as the service items here. In other words, if I was to select a new inventory item, if I was going to use a periodic system and not track the inventory through the system, I might use say the non inventory items which says here products you buy and or sell, but don’t need to or can’t track quantities, for example, nuts and bolts and whatnot.

But we could use that because again, we’re not going to track the quantity or we can use the service items. And that will treat it in a similar fashion as as it would if it was if it was a service item that we’re selling. And then we can use, we can account for the inventory items by when we purchase them. We simply record the purchase price, we record the price in terms of dollars of price, we do not record the actual unit price, and instead record the units on like a separate worksheet like Excel and whatnot, then we count how many how many we sold, and we can do a periodic adjustment at the end of the day.

So if you made another purchase, then you’d have 120 units. And now the cost went up to $60. Same unit, same things, but the cost went up, that’s going to give you 7200. This is what you record in QuickBooks, possibly, but you’re not recording the number of units you purchased. And then here, we got the 200. At the 62, we got the 12,400. Again, we’re just recording this amount in QuickBooks, then if you count the inventory at the end of the period, we count the inventory at the end of the period, and we have 240 left, for example. And then we’re gonna say, okay, we purchased during the period, this 720.

And we had a beginning balance, it looks like you’re at 100 units beginning. So that’s gonna be a total of 820. So if I take my 820 units that we started with minus the amount that we have left 240, that means we sold 580, that’s going to be in this column. Now I’m calculating the 580 that we sold. And then we have to decide, well, what was the unit cost of those 580. If they’re all the same units, but they went up in price. That’s where the flow assumption comes into play.

That’s first in first out. So I’m going to assume I sold in accordance with first in first out, and I’d figure out then the cost of goods sold, which comes out to the 31 800. And then this amount. If this was at the end of the month that I figured this out, I can enter that into the QuickBooks system, recording this entry, decreasing the inventory by the 31 eight and recording the related cost of goods sold. So I can do I can use that method to enter this information into the QuickBooks system.

So that’s one method you can you can use and then not have to do tracking the inventory within QuickBooks, and that’ll depend on the company or the type of inventory. You have. Other methods you could do. And you could just say, hey, look, my inventory is usually pretty small I use a, I use like a just in time system, meaning, you know, people order something from me, I buy it, and then I sell it to them.

So I’m not holding on to a lot of inventory at any one point in time possibly, as opposed to a store, we have a bunch of inventory in it, then maybe when you purchase, the easiest thing to do, would be to purchase the inventory and just record it as cost of goods sold at the point in time you purchase it, which is backwards, because under an accrual system, you should use that would basically be a cash based system, right. So when you buy the inventory, you just expense it as Cost of Goods Sold when you buy it.

And then again, when you sell the inventory on the Create invoice, you don’t you don’t have to deal with tracking the inventory, you just simply record the invoice like it like it’s similar function of a service item, type of item set up, which would record the accounts receivable, and the sales item, the revenue item, and you would have already recorded the cost of goods sold because you recorded it on a cash basis when you purchased the inventory. Again, that would only work if you’re in like a just in time type of inventory system, you don’t have a lot of inventory on hand. So but that would be the easiest thing to do. It’d be kind of like a cash basis method.

So it just depends on on what kind of industry you’re in you probably you obviously when you’re dealing with inventory, want to talk about that with your with your accountant, as well to see what their needs will be what are going to be the tax needs of it. But you have but just because you have inventory, just realize that doesn’t mean that you have to track the inventory within QuickBooks using the first in first out method.

You may have some other method that works fine, you could use a a periodic system, which means you’re counting the inventory possibly in something like an Excel worksheet in order to make the adjustments if you need to. We will be using the perpetual system next time however, just so we in practice the full inventory system we’ll be setting up the inventory items next time.