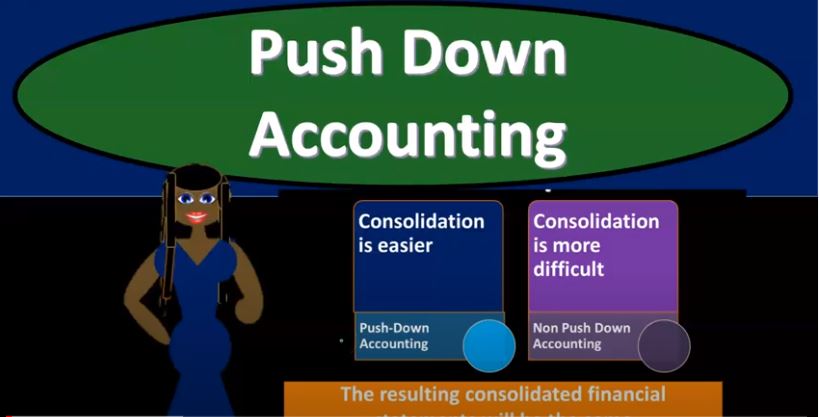 Advanced financial accounting. In this presentation we will discuss push down accounting as it relates to parent subsidiary relationships controlling interest interest over 51%, where we have consolidation accounting taking place, we’re going to be applying pushdown accounting to it, get ready to account with advanced financial accounting. So the concept of pushdown accounting will take place when we have the parent subsidiary type of relationship and we have a situation where the purchase price when the parent purchased the subsidiary, the purchase price was more than the book value of the subsidiary, which could complicate of course the consolidation process as we’ve talked about in prior presentations. So we have a couple different options that we could do.

Therefore, we have to repeat them. You know every time we do the consolidation process and account for anything Kind of adjustments as we go. So that can be, you know, somewhat tedious, it would be nice if we can eliminate, you know, make that process easier. And the pushdown accounting has potential to do so record goodwill on the books of the subsidiary. So if we were to do that, you would think okay, how would we do that logistically? Well, we do the same kind of calculation, we thought about when we think about the calculation price, the price that P paid for the stocks of s, and we would apply it out to the book value to the readjustment to the fair value of the assets and liabilities, and the difference would be going to Goodwill. And then you would think you would just record those on SS books, including the including the goodwill at that point in time, because it’s been recognized due to basically a market transaction, and then record the recapture capital for the difference. So then you might ask, well, where would the other side go? Right? You’d be revaluing things, meaning you’d be debiting if you were increasing assets debiting if you’re increasing the goodwill, where’s the credit going to go on SS books. It should Go to capital somewhere because it’s part of equity. And so it’s not retained earnings. It’s not really you know, no more stock was issued. So, they got the capital account called revaluation capital. So, we call it revaluation capital which means just what it would expect, meaning the net value assets minus liabilities have now been revalued due to basically a purchase in essence taking place, which you know kind of reveals the the goodwill that is there and the real market value that we have now identified based on market transaction, the net assets then being changed the equity section in other words with this equity account, revaluation of capital, non pushdown accounting is the case that we’ve been talking about where we have the two individuals p would be recording their investment on the fair value, the purchase price of the stock, that would be the parent and the subsidiary would do nothing, right.

They would just keep their books and just keep going forward, you know, as they would and then you’d have to take care of this. So you’d have no adjustment to the subsidiary, then the subsidiary would just be marching along like they normally do, the only thing that has changed is the ownership the stock who owns the stock, and then you got to make the fair value adjustments and record goodwill in the in the cancellation process for In other words, you would then have to every time you do the consolidation, financials, combined p parent and subsidiary together. And when you do that, remember, you’re really looking like the people that are interested, the investors, they’re the people using the financial statements interested in the consolidated financial statements will have an interest in the parent, right that because they’re usually going to be the parent shareholders or the creditors of the parent. So that means within the consolidation, it would make sense that you’re that then you would want to consolidate and make this thing to be adjusted to what the parent is recording this thing at, which is basically a fair value. So that means every time you do the consolidation, you’d have to take the subsidiaries books, which is Still marching along at book value and revalue it to that point in time that the actual purchase took place. Every time you do the consolidation options when parent pays more than book value of the subsidiaries net assets, so more than the book value, and this is typically going to be the case, right where if you have the parent is paying for the stocks of the subsidiary getting a controlling interest, and let’s say they buy 100% again, and they pay more than the book value the net assets, that’s typically, you know, that’s typically going to be the case either due to the revaluation of the net assets being higher and or goodwill being involved. So we have the push down accounting, where we have the consolidation process is a lot easier. That’s the point.