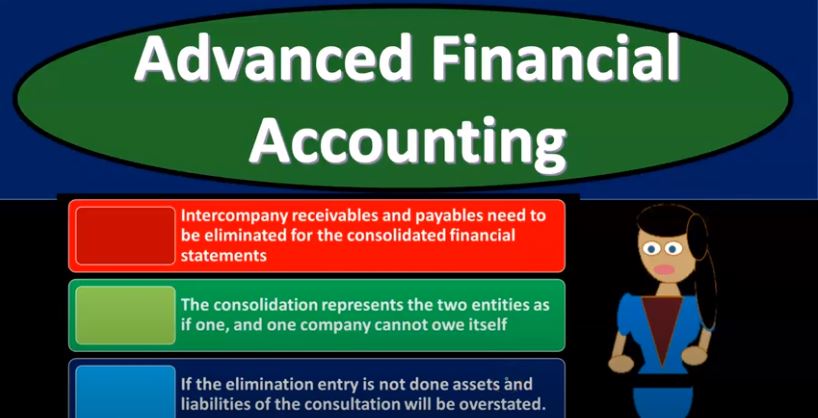 So in other words, if you have a situation where you were to say the parent company and the subsidiary company had some intercompany transactions intercompany relationships to them, then upon consolidation, you would have to do the normal kind of elimination type of entries. That would be you know, taken off the books of the parent. The the investment accounts in the subsidiaries and whatnot. And then you’d have to deal with these intercompany transactions. If you have a receivable for example, on the books of the parent that is from the subsidiary, then you would also have a payable on the books you would think equal and opposite that is owed from the subsidiary to the parent. If you were to net the two out then in a consolidation process, you would have a receiver you would have the assets and liabilities both been overstated. There would be a net result on the net income would would be the same if it was just a receivable and a payable, but you have an overstatement in that situation of the assets and liabilities therefore, we should be removing, you know that intercompany type of transactions within the consolidation process. So that’ll be a consolidating entry. That consolidation represents two entities as if one and one company cannot owe itself. So obviously if if we were to dig down on that, just logically you’re saying Okay, so now you company, the parent company and the subsidiary, you put them together onto this consolidated financial statement as if they owe themselves. And when I dig down onto the receivables information, I see that the accounts receivable contains an amount in it that is owed to this consolidated entity from one component part of its entity and that we have a payable that’s that’s a similar situation, well, that obviously can’t happen. That doesn’t make any sense.

So we would need to eliminate the intercompany transaction. If the elimination entry is not done, assets and liabilities of the consolidation will be overstated. So if it’s not done, you could still say, well, the book value, you know, assets minus liabilities will will basically be the same if that was the situation an asset and a liability being being overstated, but so the equity you would think would kind of wash out in the equity but both assets and liabilities at that point then would be overstated. So you need to remove them is the goal here, so intercompany transactions, just some examples, this would be the one with the accounts receivable and accounts payable, where you’d basically do an elimination entry. So what we’re imagining here and again, we’ll take a look at some of these with example problems we’ll take a look at this one and a few different example problems so you can get a get a feel for it. Once you see that a couple times it makes sense. So it would make sense but you can imagine peace company and then SS company, then you some, you consolidate them together, and then you’re gonna have to do your elimination entries. Once you sum together the books of P and S, the parent and the subsidiary, then you’re going to have overstatement of the payable and receivable in this condition in this situation, therefore, you have to reduce the accounts payable accounts payable has a liability account for it. Therefore, you’ll do the opposite. You’ll debit the payable, reducing the payable and then you’re going to reduce the receivable. The receivable has a debit balance. Therefore to reduce it, you’ll do the opposite thing to it which in this case would be a credit. So we’ll see an example for that one. And then we have interest, revenue and expense. So if there’s a situation where there’s basically interest being paid, for example, from the subsidiary to the parent, then you can have a situation where you’ve got revenue and expense happening, that again, would kind of net each other out. So you could you could imagine a situation where S is paying t interest. Well, what would happen well on SS on SS books, they would decrease cash and they would be recording the other side to an expense. And on the parents books, they would be debiting cash or increasing cash and recording the other side to revenue. So that means similar situation as we saw on the balance sheet, that would mean that you know, the net income once we consolidate, the net income would wash out the net income would be right but revenue for interest revenue would be overstated and expenses for interest expense would be overstated, and we should remove those, those two Accounts because it doesn’t make sense for us to be if you consolidate the financial statements together for us to be saying, hey, part of the interest revenue came from a component part of the consolidation entity that we consolidated together and part of the interest expense was an expense of a payment that went to part of the consolidation. That doesn’t make sense.

So we’ve had to remove that. So revenue, interest revenue has a credit balance, so we need to decrease it. So what did the opposite thing to it, which would be a debit, and the interest expense then has a debit balance so we do the opposite thing to it and we would credit the interest expense for that elimination entry. We can also have interest payable and receivable, in which case that the interest has not yet been paid, for example, but has been accrued so if you had a year end adjusting entry, where let’s say there was a loan out that from that, s RP made to s, then S would owe if they didn’t pay the interest, you’d have an adjusting entry at the end of the at the end of the year for people Which would say that you would debit the the interest receivable because there’s interest that has been accrued that haven’t has not yet been paid. And then you would be crediting the interest receivable. And then on the other side, you would have the the the payment that would be made by us or the interest that have not yet been paid. So the adjusting entry, there would be an increase to the interest payable and recording to expense. So if that happened in the current period, you could have you know, interest, revenue and expense if it happened in a prior period. Again, we might just simply have a payable and receivable being reflected on the two books and we’d have to reverse that. So that would mean that again, similar to the accounts receivable payable type of situation, if we looked at the interest payable and said the interest payable there’s a payable right owing money, and we owe money to another component of the of the consolidated entity that doesn’t make sense. We can’t really owe money to ourselves and if we have a reason receivable, then we look at who the receivable is from and a component part of the receivable. And the subsidiary ledger, if we break it out by who owes the money is from a component part of the consolidated entity, that doesn’t make sense. So the interest payable, we would need to decrease it has a credit balance because it’s a liability. So we do the opposite thing to it and debit it. And then the interest receivable has a debit balance. So we’re going to make it go down by doing the opposite thing and crediting it.