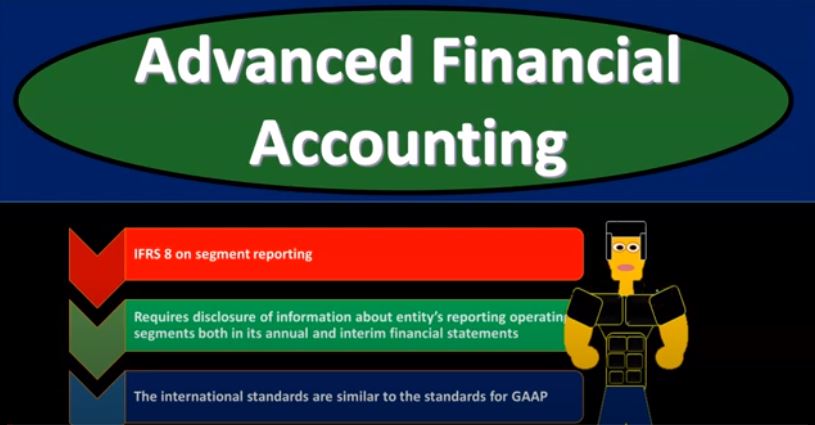 Advanced financial accounting PowerPoint presentation. In this presentation, we will give an overview of segment reporting, get ready to account with advanced financial accounting, overview segment reporting. So when we think about segment reporting, we’re thinking about a company breaking that company into the segments. And when we think about the segments, two questions we want to consider are what is a segment? How does one qualify or how does a segment qualify as a segment and once qualifying for a segment, then what are going to be the financial reporting that needs to be done for the segment? So three characteristics of an operating segment, the component units, business activities, generate revenue and incur expenses. So the component unit that unit you can think about like a separate unit incurs revenue and has expenses including any revenue or expenses in transactions with other business units of the company? So we’re including the transactions if you’re thinking about it as a different segment, a different unit? You’re thinking okay, they have revenue and expenses with In the revenue worth, we’re also including any revenue or expenses, in transactions with other business units of the company. So you’re kind of thinking about a segment as being somewhat autonomous in and of itself here, and therefore having its own basically revenue and expenses, although it can be connected to other segments, the component units, operating results are regularly reviewed by the entities Chief Operating mark, operating decision maker.

So we have the chief operating decision maker, that’s going to be monitoring the different segments. And obviously, that’s going to be one of the reasons why you’d want to basically break out the segments if you’re talking about the managerial accounting, they’re going to be wanting to break things up into relevant components. So they can basically look at those if you’re taking a look at a segment that’s somewhat autonomous, in and of itself has its own revenue and expenses. You would think then it would be reviewed, then by the Chief Operating decision maker, who then determines the resources to be assigned to the segments and evaluates it separate financial information. is available for the component unit. So given these these components, you would think then, of course, that if they have their own revenue and expenses, and they’re going to be analyzed separately, then you would think they would have separate financial information that we can basically be applicable to that operating segment segment reporting accounting topics, we have the corporate headquarters is generally not a separate operating segment. So when you think about different operating segments, you might say, you can imagine a you know, chart of a large company and say, Alright, here’s, here’s one entity here, and then different entities and usually, the corporate headquarters is kind of in the middle of the flowchart, right? And you say, well, that guy that’s got to be a separate separate unit. But that’s not generally the case. Because it’s, it’s there to kind of support all the other units. So we’re not really thinking of, even though the corporate headquarters, you know, is doing a different thing than other than other items. It’s doing the administrative kind of thing or overseeing and doing the ultimate decision making process. We don’t think of it basically as a separate segment, it’s not really generating revenue, it’s generating its own expenses, but it’s not really generating any revenue, it’s going to be a supportive type of function for the corporate office.