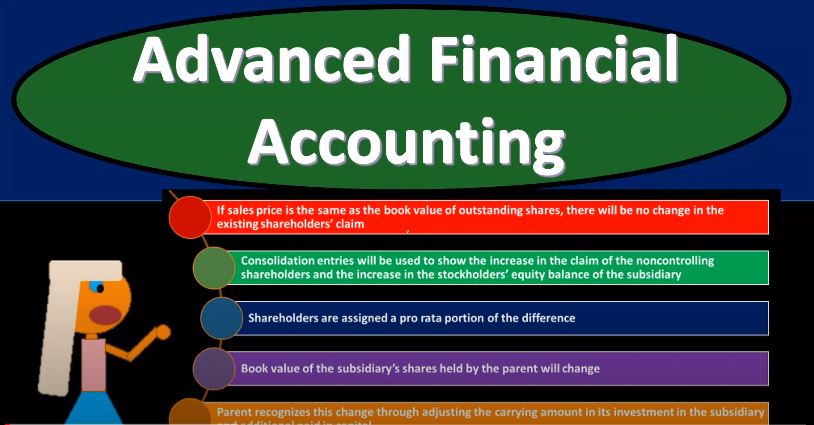 Advanced financial accounting PowerPoint presentation. In this presentation we will discuss a consolidation process where we have a parent subsidiary relationship and the subsidiary sells additional shares to a non affiliate. So we have the subsidiary selling shares not to the parent, but to a non affiliate what will be the effect on the consolidation process? Get ready to account with advanced financial accounting. We are talking about a situation here where the subsidiary is selling more stock or additional stock to someone outside of the organization, someone who is not affiliated not to the parent or some other subsidiary, what will be the effect in the consolidation process? It’s going to increase the total stockholders equity of the consolidated entity by the amount received by the subsidiary in the sale. That of course would make sense because if you imagine the transaction taking place, then if they got cash for it, for example, cash would be going up the other side going to the equity so it’s going to be increasing the total stockholders equity will increase total shares outstanding for the subsidiary reducing the percent ownership of the parent company. So if the subsidiary then issues more shares and they didn’t go to the parent, then that means there’s going to be more shares outstanding. That means the shares that the parent owns will go down, therefore, their percentage ownership will typically go down. In that case, we’ll increase the amount assigned to the non controlling interest.

So when we think about the non controlling interest versus the controlling interest, if more shares went out to non controlling people and nothing went to the controlling interest, then of course, you would think that that can be controlling a percentage or amount would go down, and it’ll increase the amount assigned to the non controlling interest, the amount of the controlling and non controlling interest are affected by two factors, one, the number of shares sold to the non affiliates, so how much how many shares went out to the non affiliates because as they do so then, of course, people that are not affiliated have a bigger percentage or more of the shares than the affiliate in Forbes. apparent, and then of course, the price the shares are sold to the non affiliates for so now we want to think about what do we do with the difference between the book value and sales price of the subsidiary shares. So we have a difference between the book value in the sales price. What’s the effect of that, if the sales price is the same as the book value of the outstanding shares, there will be no change in the existing shareholders claim, because they sold it basically for the book value at that point, so no change in the existing shareholders claim. consolidation entries will be used to show the increase in the claim of the non controlling shareholders and the increase in the stockholders equity balance of the subsidiary shareholders are assigned a pro rata portion of the difference. The book value of the subsidiary shared shares held by the parent will change. This is one of the more confusing kind of components and parent recognizes this change through adjusting the carrying amount in its investment in the subsidiary and the additional paid in capital. So in other words, they’re going to base your thinking basically the equity method, you’re thinking the equity method On the parents recording their investment in the subsidiary, and that’s going to have a change, the parent recognizes this change to the adjustment to the carrying amount of investment. So the investment then changing. And then the funny kind of thing is that the other side is going to go to additional paid in capital. So the other side is going to go to additional paid in capital, recommend looking at some examples for this. So you can see how that change will play out in our Excel examples or the OneNote examples.