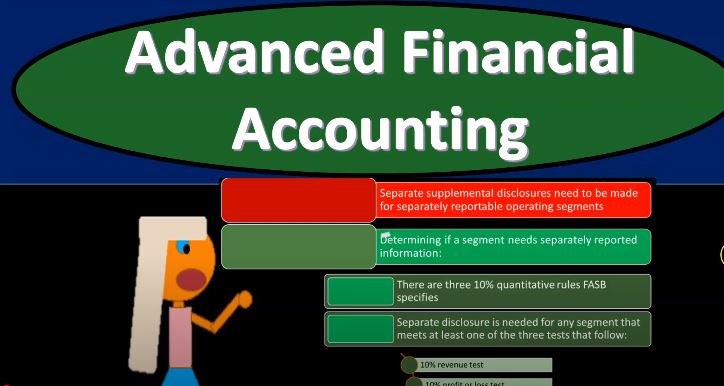 So once again, 310 percent tests you’re Figure two income statement one on the top line revenue tests one on the bottom line for the net income basically tests and then you got one on the balance sheet for the 10% of the assets tests. So once you’ve done those, then we’re going to go to the hot comprehensive disclosure tests, we have the 75% consolidated revenue tests. So it will be applied After determining which segments are reportable under under any of the 10% tests. So we’re going to do the 10% tests first. And then we’re going to say okay, now we’ve done our 10% test, we figured out the the set the separate segments that are required based on those 10% test and then if the total external revenue of the separately reportable operating segments is less than 75% of the total consolidated revenue, then management must select and disclose information about additional operating segments until at least 75% of the consolidated revenue is included in reportable segments. So you did You’re going to do the 10% test, you’re going to break out the segments that apply or one of those rules mean that we have separate reporting. Once done, you’re going to take a look at those and say, Okay, now we need to have at least 75%. That is reported in separate segments. So therefore, if the items that we did the 10% tests are not adding up to the 75% rule, then management must select and disclose information about additional operating segments until they get to that basically 75% rule. So that’s kind of like the floor rule, the baseline, the bottom line rule. So comprehensive disclosure test other items. 10 is generally used as an approximate upper limit on the number of reportable segments. So you’re thinking about these reportable segments now. So we’re breaking out these reportable segments using the 10% rule and whatnot, and then the 75% rule. And then you’re saying, Well, how many you know reportable segments are there typically, because the goal of this is to give real information. And you would think that if the reportable segments go beyond a certain number, which were arbitrarily picking as 10, it would no longer be providing relevant information would be maybe too much too much information at that point. So then we’re thinking now 10 is usually used as an approximate upper limit. So it’s gonna be an approximate upper limit. If a company has more than 10, they may consider aggregating segments that are most closely related. So if you’re going if it goes past 10, you’re gonna say okay, maybe this more detailed information is not providing more useful information, but it’s just getting more muddy muddy in the water with too much information. Maybe we can take the segments that are related to each other, and and combine those concerns to aggregate those segments together. Comprehensive disclosure tests other items, judgment in segment determination, companies will separately report segments that have been reported in prior years. years, but fail the current periods, significance tests because of unusual happenings. So in other words, if you say that we had separately reported this segment in the prior year, then for compare ability sake, you would think you would kind of want it to be reported this year. But if it doesn’t meet the 10% tests, you might say, Well, why shouldn’t report this year, but if the reason it doesn’t meet the 10% test is something unusual happen that yours is a weird year for the business for whatever reason, then you would think that you would want to be on the consistency principle and still report it separately as a separate segment, so that it’ll kind of it’ll be consistent with the prior period.

And you would think going forward, then it may, it may even still be a separate segment and qualify under the 10% rule for the next year. companies do not need to separately report a segment that has met a 10% test on on a one time basis only because of unusual circumstances. So on the other side of things, we might say, okay, we’ve never reported this Document before separately, and it’s it meant a 10% test top, maybe just barely or whatever this year. But that was kind of a fluke, because some weird thing happened this year, which we don’t expect to happen next year. So in that case, again, you’re kind of leaning on the consistency principle saying, Well, yeah, method 10% test, but we don’t think it’s going to add, you know, the value to it because it methods 10% test on a one time stance, and it’s an unusual stance. So maybe in that case, even though it meets the 10% test, you may not may not include it as a separate segment. In that case, if a segment becomes reportable in the current period, that was not reported separately in earlier periods, the prior year’s comparative segment disclosures, which are included in the current year’s annual report, need to be restated to achieve a compare ability of financial data. In other words, if you say okay, now we have no separate reporting. We have separate reporting this year because it met the 10% test and we think it’s legitimate, it’s going to go forward. And and it’s not like a fluke thing. So we think we should add it and it wasn’t there last year. So it wasn’t there last year. Then you would like to within the reporting if you report in the financials together, included in the prior year too, so that you have the Compare ability between between the two information to be disclosed for every segment that is determined to be separately reportable includes so we got we’ve determined that they should be separately reportable. Now what information do we need we have the segment’s assets, we have the general information. We have amounts for each separately reportable segment and measurements of segment profit or loss and the reconciliations to the consolidated total.