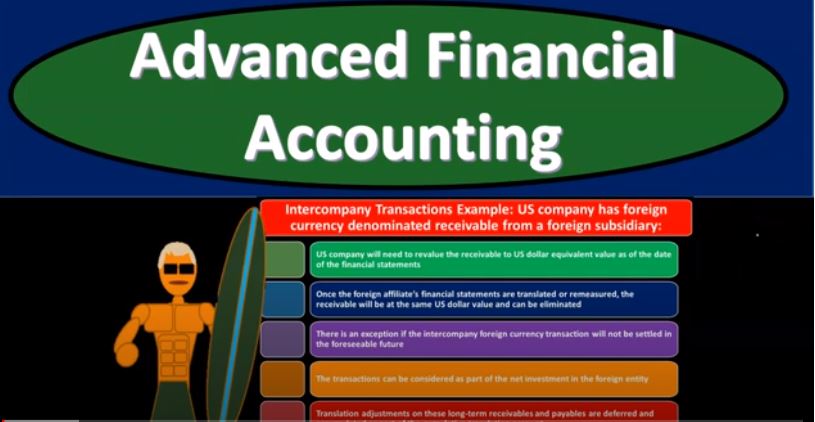 Advanced financial accounting PowerPoint presentation. In this presentation we will discuss other foreign operations issues, get ready to account with advanced financial accounting, other foreign operations issues. So we’re going to start off with an issue related to the parent company having a foreign subsidiary. Typically when that is the case, they’re going to have to consolidate. In other words, you’re going to have to get the foreign subsidiary books in some way to the US dollar and then do the consolidation process. However, you might have a situation where that wouldn’t take place under certain conditions. So, parent generally consolidates a foreign subsidiary except when certain conditions are so severe that the US company owning the foreign company may not be able to exercise the necessary level of economic control. So notice when we think about the consolidation process, we’ll typically think about, we need to consolidate the entities if there’s control right over the 51% is that going to be a general rule but the overarching concept is that there is control. Now if there are certain conditions even though it’s the ownership is over the 51%, we would think there would be control, but there are certain conditions in the foreign subsidiary that are restricting that economic control, then then they might not meet you know that condition and therefore in that situation you might not have the consolidation process. So in that situation then you might have a parent company that has basically a controlling interest you would think in terms of the stock, the stock but you’re not having a consolidation due to the due to one of these factors limiting the actual economic control. So, those include restrictions on foreign exchange in foreign country. So severe strict restrictions, there could be one of the items that would stop the basically consolidation process possibly restrictions on transfers of property in foreign country.

So if you can’t transfer the property that could be another, you know, barrier to having the actual economic control large government imposed on certainties. So if we had other basically uncertainties due to the foreign government that again could have consequences in terms of the economic control of the parent company to the subsidiary, so unconsolidated subsidiaries. So what do we do then we have this subsidiary that you would think would typically be consolidated, but now it is unconsolidated due to one of these conditions. Well, what are we going to how are we going to report that subsidiary then, so reported as an investment on the US parent company’s balance sheet, so as we would expect, we’re still going to report it. You know, the investment on the balance sheets of the parent company has an investment in the subsidiary that we will typically report on the balance sheet just like we normally would, but then when we go through the consolidation process, we typically then consolidate that out and report them in a consolidated report. So we would still be be reporting their investment on the balance sheet, the equity method is used if the parent has the ability to exercise significant control. So we said now we don’t have enough control basically to do the consolidation. However, if you still have significant control, which was over like 20% or so then it would you would think then, if they would have consolidated, but they’re not consolidating, due to one of these factors, they would generally still have significant control and therefore, be recording their investment in the subsidiary with the use of the equity method. When using the equity method, the investees financial statements are either remeasured or translated depending on the determination of the functional currency. So, we still have that that process of remeasurement or translation depending on what the functional currency is of the foreign subsidiary, the cost method will be used if the equity method cannot be used. So if you can’t use the equity method, which is the one that you would think would be used, if you had significant influence, then the cost method would be used liquidation of foreign investment liquidation of foreign investment, the translation the translation adjustment account is directly related to the Companies investment in a foreign company, when the investor sells a large portion of a stock investment, the pro rata portion of the accumulated translation adjustment account attributable to that investment is included in computing our gain or loss on the disposal.

So it’s gonna be a one of the you know, the key factor here is you got to include that in the calculation. So once again, when the investor sells a large portion of the stock investment, the pro rata portion of the accumulated translation adjustment account attributable to that investment is included in computing the gain or loss on the disposal, hedge of a net investment in a foreign subsidiary, gain or loss on the effective portion of a hedge of a net investment is taken to other comprehensive income as part of the translation adjustment, amount of the offset to comprehensive income is limited to the translation adjustment for net investment. And then the difference if there if there’s any Excess on the affected portion and the effective portion, it will be recognized in the earnings. So then we have the disclosure. So we’re going to take a look at some of the disclosure issues here. The aggregate foreign transaction gain or loss included in income needs to be separately disclosed in the income statement or on a note accompanying it. It is not disclosed and one line item which you think you know, you’d have a one line item on the income statement for it. But if that’s not the case, then the then the disclosure will usually be a one sentence footnote that will need to be included. So then we have the statement of cash flows, amounts reported will be restated in US dollars using the same rates as used for income statement purposes. So statement of cash flows is going to be a timing statement. So and you can see it’s kind of related to the flow process, which is the income statement. Another timing statement has a beginning and an end. So you would think we would be using the similar accounts there or rates For the translation, which would be usually the default would usually be the average rate Unless Unless you have to use the historic rate if you’re using the remeasurement process and whatnot. So, a balancing item for differences differences in exchange rates will appear on the statement of cash flows, inventory valuation, lower of cost or market. So, now, we have this lower of cost or market issue, when we have basically foreign subsidiaries involved, historical cost will be remeasured using historical exchange rates to determine the functional currency historical cost value.

The remeasurement costs are then compared with a net realizable value or market value of the inventory is translated using the current rate. And then we can compare the cost and the market which which are now both in the functional currency. So we got to get them both in the functional currency once they’re in the functional currency, then we have our normal kind of process for the lower of cost or market. So to identify The appropriate write downs to market that are needed. So obviously we’re going to In other words, we’re going to apply the lower of cost or market we got to make sure that we get we get the items in alignment with the functional currency so that we can make the comparison and then make the the write downs when necessary intercompany transaction example, US company has foreign currency denominated denominated receivable from a foreign subsidiary. So once again, this is an example of an intercompany transaction. We have a US company so we’re the parent company’s a US company has a has a foreign currency denominated receivable. So we’ve got a receivable that’s denominated in foreign currency. So the parent company is going to be receiving a receivable from a subsidiary, but that receivable will be received in foreign dollars. So from from a foreign subsidiary. So that’s the example US company will need to revalue You the receivable to US dollar equivalent value as of the date of the financial statements which is basically standard procedure right we got the receivable on the books we’re gonna have to read it’s we’re gonna have to remeasurement to the to the to the date the rate at the date of the financial statements for the receivable once the foreign affiliates financial statements are translated or remeasured the receivable will be at the same US dollar value and can be eliminated. So once once that has taken place we’ll have the same US dollar amount reported on there after we have translated the the subsidiary account and after we have remeasured to the to the current time period, the account on the parent company books and then we can remove them in the normal process we would for an intercompany transaction related to the receivable, meaning you know, the receivable would go down on one side of the books, the parents side of the books and the pay up would go down on the other side.

Obviously the complication there is making sure that we have equivalent amounts, after we do the after we do the exchange process. So then once we have both amounts recorded, basically in terms of the US dollar, after we have done either the translation or remeasurement, then we should be able to eliminate that in a normal normal way. There is an exception if the intercompany foreign currency transaction will not be settled in the foreseeable future. So, if it’s not going to be settled in the foreseeable future, that’s unusual, there could be an exception, the transactions can be considered as part of net investment in the foreign entity. Transaction adjustments on these long term receivables and payables are deferred and accumulate on and accumulated as part of the cumulative translation account they accumulate income taxes. So we talked about income taxes in the past when we get when we have the combination, but now we’ve got the added problem of the foreign subsidiary here that could complicates the income taxes a bit as well. So whenever temporary differences exist in the recognition of revenue and expenses for income statement purposes and for tax purposes, inter period tax allocation is necessary. deferred tax assets or liabilities will result from exchange gains and losses from foreign currency if they are included in income, but not recognized for tax purposes in the same period, so that a deferral is necessary for the portion of a translation adjustment related to the subsidiaries undistributed earnings that are included in the parents income