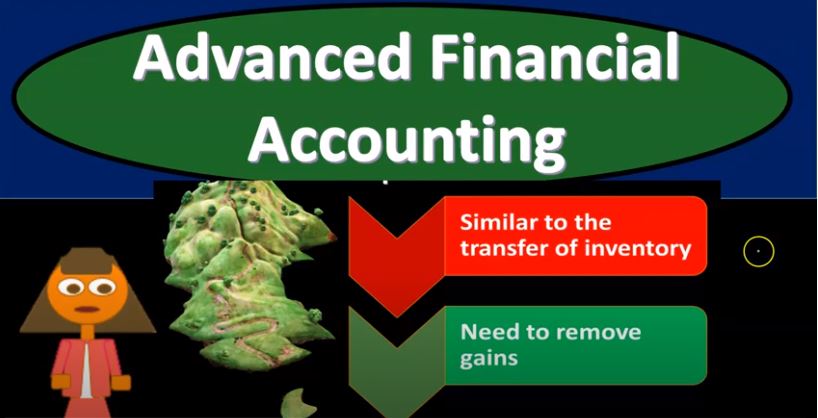 So if there’s going to be a transfer intercompany transfer from one company to the other something like a parent subsidiary transfer parent subsidiaries subsidiary to parent of long term assets like depreciable assets or non depreciable assets such as land or if there’s intercompany services, then we’re going to have to do a consolidation process to remove the intercompany transactions. Now this is similar in some ways to the inventory we thought about the inventory in prior presentations where we had the sale Something that’s going to basically be a sale intercompany type of transaction of some of some physical assets or inventory is a little bit difficult. One factor of the inventory being difficult is the fact that you have that physical asset that’s going from one to the other. And then you have that change in the value of the asset on one books and the others books. Now, when you think about any other type of transfer, similar kind of process, right, so if you have services that are transferred, you can imagine you still have to remove the intercompany revenue and expenses, but it’s gonna be easier because you don’t have any physical item that’s being transferred. So typically, that’ll be a little bit easier. If you have long term assets. If you have things that are depreciable, they’re going to be a little bit more difficult because now you got to deal with the depreciation involved.

So that’s going to be really the new kind of thing that’s a little bit more difficult. If they’re non depreciable, such as land is a transfer of land Well, the transfer of land is going to be a lot more similar to the transfer of of inventory. And it may be even easier because you’re Not going to have that that situation where how much inventory is left and whatnot, is how much inventory still on the books, because once the transfer happens, you would assume the land would stay put for some period of time. So so the more difficult type of transfers that we’re considering here, you can see some will be similar to the inventory. But typically, the transfer of depreciable assets are going to be the new kind of difficult thing because they’re actually moving with a moving target, meaning you have something that’s been transferred that you can have to deal with the original transfer, and you’re going to have to deal with the added depreciation that’s going to be resulting from that transfer. So keeping that in mind, we have the unrealized intercompany gain or profit must be removed. So in general, obviously, if there’s an intercompany, gain and profit, if one item just went to the other item, like it’s kind of like a location change, then we got to remove the profit because there’s no profit that really happened because nothing was exchanged outside of the organization. It’s all an intercompany transaction in upstream transactions. deferral is shared with the non controlling interest. Same kind of situation we had with the inventory, the different we had to differentiate between the upstream and downstream transactions. So we’re gonna have the same kind of situation here. So keep in mind that when you’re talking about an upstream transactions, you’re talking something that was sold, it went from the from the subsidiary sale from the subsidiary up to the parent. So we’re considering like a flowchart parent on top subsidiary down upstream transaction, going from a sale from the subsidiary to a parent downstream transaction going from the parent to the subsidiary. In upstream transactions. The deferral is shared with the non controlling interest, amount reported for a PP and E property, plant and equipment should not change just because asset is moved to a different location to the parent or subsidiary. In other words, the basic principle here of this in the consolidation process is that there’s no real transaction that happened In terms of something going to a third party, there shouldn’t be any adjustment to long term assets property, plant and equipment depreciable assets, just because it went from one location to the other, no real sale took place. From the perspective of a consolidation transaction, what really happened is all that happened is that was relocated, just as if it was located in one department of organization or and then it went to another department. Therefore, that’s why we have to, of course, eliminate that transaction.

So then the objective that would follow from that line of reasoning, that logic then would be that we need to undo the transfer and adjust the estimated useful life of the asset. So we’re going to undo, you know, the transfer that took place. And then with regards to depreciable assets, we’re going to have this issue with the depreciation. What are we going to do about this depreciation that we have? So we need to basically look at the the useful life going forward from that point in time and think about how we’re going to account for that Now this will be a lot easier and more clear once we do the example problems. So we’ll do many example problems related to this. And that’s what will really pull this together. But these will get this from a conceptual point of view, and then work the practice problems, non depreciable assets. So if it’s a non depreciable asset that was transferred, that’s a long term asset, you’re typically thinking land, so we’re typically often thinking land there. Now land is going to be easier because so because there’s no depreciation related to it, so it’s going to be similar to the inventory. So if there’s a transfer of land, then you’re going to do a similar process kind of to the inventory type of type of transfer that took place and you don’t have to deal with that added complexity of the of the depreciation that will be involved. And it should be even easier than inventory in some cases in some ways because inventory again has a lot you’re questioning whether or not the inventory has been resold or not land you would think you would stay put if you sold if you sold it from subsidiary to parent or parent to subsidiary one. That took place you would think it would be staying put not have that resale kind of component. So you need to remove the gains obviously is going to be the objective, when you have the sale of land because if it was sold from the parent to the subsidiary or the subsidiary to the parent will often be sold, if it’s if it’s not sold at book value, you’re going to have a gain or loss. And that will typically need to be removed because there is no real intercompany game in that transaction. Because we’re thinking about both entities as if one. So then we have the depreciable assets. And this is really where that kind of a new complexity comes into play with a depreciable assets, you know, more complex or different complexities than you have with say inventory types of transactions. So we have to remove the seller’s gains. So same kind of thing. And note, there could be some little bit of difference between upstream and downstream transaction, same kind of thing that we had with the inventory. But the general concept overall is that of course, we need to remove the game that took place there was no game In a sale of depreciable assets like equipment or or building and whatnot, there’s no gain involved in that if you sold from one to the other, so, that game basically would need to be removed then the adjusted transfer asset back to the old basis. So, the asset then in other words needs to be true it needs to be reallocated back to the original basis, because once again, no no transaction really took place, there wasn’t really a sale. So, you can imagine then once the sale happened to the depreciable assets, then it would go on the books for whatever the the purchasing company paid for it.

So if we have services that are transferred, these are going to be, these are going to be a lot more simple because you’re saying now you got a service that it’s happening. So it’s a similar process, but we don’t have to deal with with a physical inventory or a physical property, plant and equipment. And we don’t have to deal with whether or not they resold the property, plant and equipment as we would have would have to do with the inventory. And we don’t have to deal with like depreciable factors as we would have to deal with depreciable assets. So so the transfer of services should be a lot easier we got to remove the revenue expenses will be overstated. So we got to remove those because you can imagine Of course, if there was a sale of services from one to the other one company does services for the other, then expenses are going to be high on one book or overstated. The revenue will be overstated. On the other side, there will there’ll be no net effect on the net income. So if you look at this and you say, hey look, the net income is not affected. Why? Because the revenue and expenses went up by equal and offsetting components for the two companies books once combined together then equaling each other out. However, even though there’s no net effect on the net income, it’s still important to reduce revenue and expenses in the consolidation. So for so we’re going to have to reduce basically revenue and expenses even though there’s no effect on the on the net income because those two components revenue and expenses will be overstated.