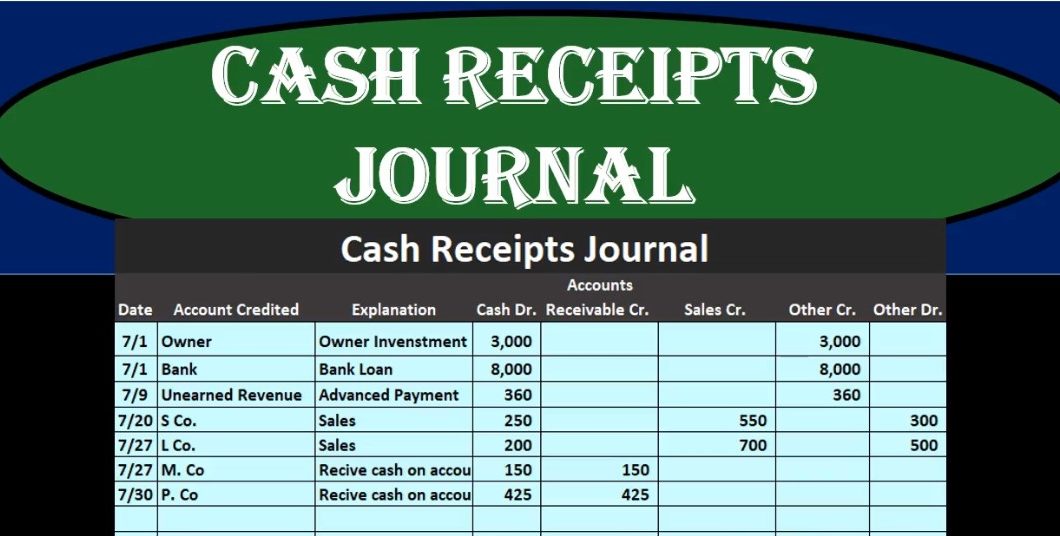 Note that the main thing we will be receiving cash for most of the time is going to be something like sales. If we make sales consistently for cash rather than on account, then that would be a great use of the cash receipts journal because we can have just two line items and record those to record those two out here and then sum them up at the end of the month. Or the other common transaction would be to receive cash on account the other side then being accounts payable. But there are other types of things that we can be dealing with with cash and those things we’re typically going to put into the other category. When dealing with those items, breaking them out then at the end of the month, when we do the adjusting over the journal entry at the end of the month. And we’ll total these up in order to then record the journal entry at the end of the month. Note that the cash receipts journal is most effective when we have many transactions that are much the same. We would record all those transactions for the time period, whether that be the day, the week or the month. 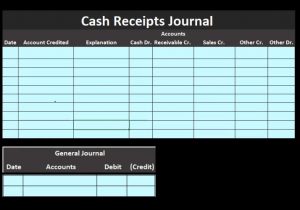 Hopefully not that many times that the owner has to put money in to the business they want to be taking the money out, and therefore we will put it into the other breaking that out at the end using this account category here to do so. Next item we’re going to say borrowed from the bank that happened on seven one. We’re just going to save up Bank for the account credited. And then we’re going to have the explanation, it’s going to be a bank loan. Once again, we will have a credit to cash because we were always going to I mean, I’m debit to cash because we’re always going to be increasing cash here because it’s the cash receipts journal, the other side, then it’s going to go to other again, because once again, we don’t think we’re going to have too many bank loans. Hopefully, that’s not the reason we’re getting cashed most of the time. And hopefully, most of the time we’re making sales or getting money on account for sales made in the past.

So we’re going to put that into other breaking it out at the point in time that we make the journal entry at the end of the time period, in this case, the end of the month. Next transaction on seven nine received Cash for Work that will be done in the future. So we’re going to say unearned revenue is going to be the account that we will be dealing with, because remember our journal entries here we’d have to kind of know our journal entries to figure this one out. If you know, we got cash and then we can’t credit we debit cash and we can’t credit the revenue account. We’re going have to credit something else. The reason we can’t credit revenue is because we have not yet earned it and therefore can’t record it until we earn it under the revenue recognition principle, therefore, that credit will then go to the unearned revenue a liability, it’s going to be an advanced payment, so the customer paid us in advance. In other words, it will be an increase of cash as always the 360. 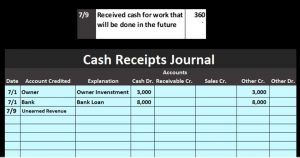 If this were a normal sale, it would then go to the sales column, which we would break out into a normal column. But because it’s not a normal sale for us, we got paid before we’re going to put it into other breaking it out at the end of the time period to on earned revenue. Now if we were a type of company that always had unearned revenue, in other words, if we did something like newspaper subscriptions, and we always got paid before we did the work delivering the newspapers in that case, then we would have another column of unearned revenue and that would be our normal transaction. But for most companies, we do the work before we get paid or at the same time. Therefore this transaction would be somewhat unusual. Next transaction 720 completed job for s company received 250 will receive at a later date 300. So we did work and we got some money, but not all the money. This is going to be a confusing transaction. Because even if we just said, we did work and got cash, even if it wasn’t broken out between these two, it’s often something that we will get wrong in terms of what journalists will go into.

Because clearly we made a sale, we completed a job we basically made a sale in that case, and you would think it would go in the sales journal. But the sales journal is only there when we have something on account. And in this case, we got cash. So anytime you get cash, even if it’s for a sale, it’s going to go into the cash receipts journal rather than the sales journal. So we’re going to say the S company is going to be the company we want to list out the company here so that we can know what the subsidiary Count will be. And we don’t need to have the account credited here because the account will be in the sales column for this case, what we do want to do is is break out who we’re selling to, so that the accounts receivable component will be their explanation will be sales. And then we’re going to say the amount going up is the 250. So when we got 250, out of the total 550 that we did work for the other side then is going to go well then we’re going to have sales going up by 550. That being the 300 plus the 250. That’s what we did to work for but we only got 250 cash, therefore 550 minus 250 is the 300 the 300 going over here into the other debit and that’s going to be a bit confusing because you might say hey, we got an accounts receivable right here, why don’t we record it to the accounts receivable because that’s what this is going to be representing. 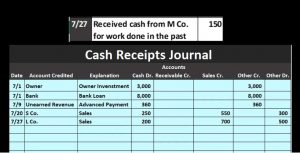 We’re going to say it’s going to go up to cash of 425 the amount of received always debit in the cash in the cash receipts journal, the other side then go into the accounts receivable decrease in the accounts receivable this In a really normal transaction, so if we’re in a type of industry where we make sales on account, and then we collect on those accounts, this cash receipts journal would probably be filled with pretty much mostly these transactions all the way down. If on the other hand, we make sales on account, then the cash receipts journal would be filled with mostly this column here. And these other columns are ones we really want to practice, because those are the confusing ones in test and in practice, but ones that are more rare or not the norm or not the transactions made 90% of the time. Then we’re going to total this stuff up. So we’re going to total everything up and the cash side we got the 3000 cash the 8000, the 360, the 250, the 200 plus the 150 plus two fourths 25, giving us a total of 12,003 85 accounts receivable 150 plus 425 gives us a total of 575 in the sales 550 plus 700 gives us a total of 1215. And the other credit 3000 plus 8000 plus 360 gives us a total of 11,360. And other debit 300 plus the 500 gives us the 800.

Sales is typical. typically used for a merchandising company, and revenue or, or fees earned or something for a service company, we will use the sales term here because it’s often used in the journals. When we have a sale journal, we typically call the sales journal rather than a revenue journal. So we’ll keep that term and we will look briefly at a merchandising company as well. Then we’re going to have the other which we have to break out note, we can’t just use this 11,003 60 because we don’t know which account it goes to. That’s the point of putting it into other we don’t know where it goes. So we’re gonna have to look over here and say, Okay, this went to the owner owner investment, that means it’s going to be the capital capitals got to be increasing. That’s what represents the owner investing money in a sole proprietor, therefore we’re going to increase capital capital has a credit balance, we’re going to increase it crease it, as it says here with a credit. 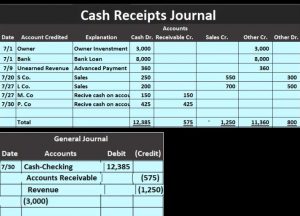 So we’re increased the capital then we have the bank. So the bank loan another other transaction in the credit, note, we debit it, of course. For these, both of these, the debit is already included here in the 12,003 85. We already got that, we just need the credit side related to this amount. So the totals already there, we need the credit side. So in this case it’s going to be a bank loan. So that’s going to be something like a notes payable that will record this too. That’s a liability account, we need to make it go up so we’ll do the same thing to it. Another credit has is indicated here. Then we have the unearned revenue. So unearned revenue here again, the debit the cash is already included in this 12,003 85 right there. Now we need to include the other side in this case go into unearned revenue, a liability account liabilities have any credit balance, we’re going to increase it doing the same thing to it another credit. Then we’ve got the others being a 300 and the 500, adding up to 800. And that’s going to go into the accounts receivable. 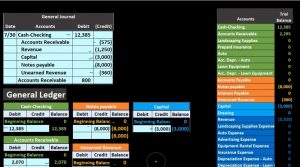 Finally, we’re going to take a look at the accounts receivable subsidiary ledger because you’ll note that these items here are dealing with customers and we want to break out more than just this item here. We know how much people owe us but we need to know who owes us money so that we can collect on that money more easily. To do that we do the accounts receivable subsidiary ledger. So we’re basically taking our cash receipts journal looking at these items here to break out this number. So this number that we recorded, that’s our Indian accounts receivable. Here’s the activity that we did in summary, during the time period, and now we’re going to have to break out that activity by customer So first, we’ve got the 300 here. 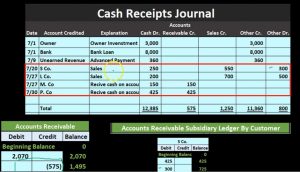