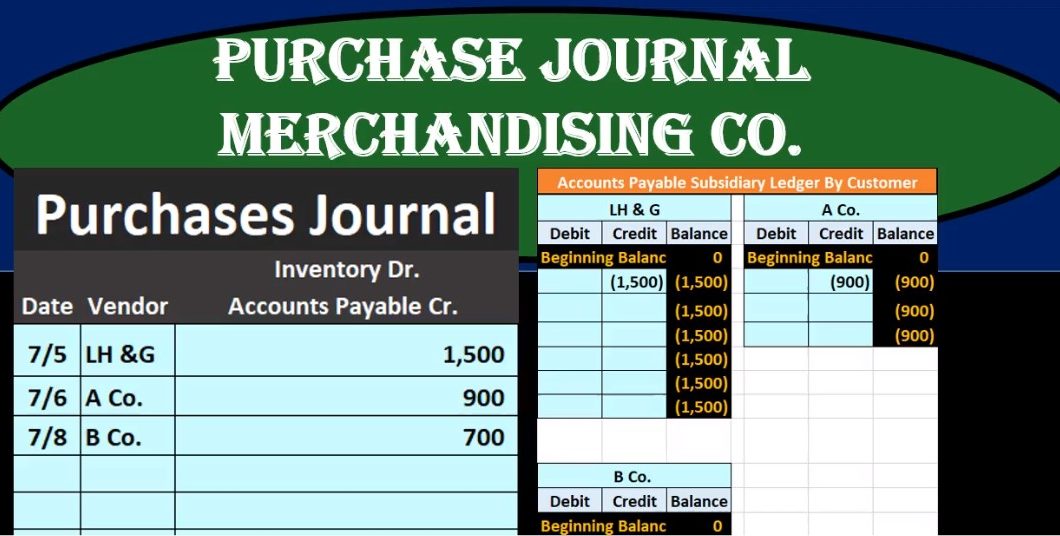 Now we’re going to make a purchase journal for a merchandising company and limit this to a very specific type of purchase, which really is when this system would work best. Because if we purchase a lot of different things on account, like we pay expenses and utility bills, and you know, the gasoline bill and whatnot on expense on account and we put it into accounts payable, then it gets a little bit messy because we don’t have these separate columns that we could break out, we end up putting a lot into other and this system doesn’t work quite as well. However, if all of our purchases are for something like in the case of a merchandising company inventory, then this system works great because we can just record this one line item for the entire time period, whether that be the day, the week or the month. In our case, it will be for the month and then some At the end of the time period and post it with one journal entry rather than recording multiple journal entries, so we’re going to go through just a couple of these, this will look a little bit repetitive here because we will be dealing with the same type of transaction. 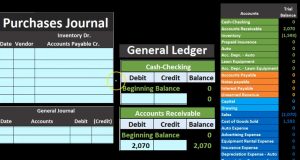 So we’re going to say in this case, we’re going to say it’s inventory that we’re purchasing, we’re always purchasing inventory, we’re using the accounts payable account to purchase inventory. So the journal entry is a debit to inventory, credit to payable because we have not yet paid it. And it’s nice and easy. Here we just got one number that can represent those two items. And this type of setup works great when this is the system being used. So then we’re going to post this not to the general ledger yet, we will post it to the general ledger, but not to till the end of the time period. In our case, the end of the month. We will post here instead, as we go to the accounts payable subsidiary ledger, the subsidiary ledger being broken out by who we owe by vendor. And so we might as well record that as we go because we’re gonna have to record it time by time line by line. So we will record This in the l, h and G credit side and increase 1500 to the subsidiary ledger. 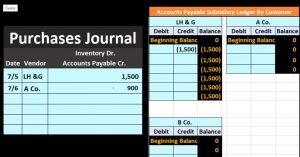 And that’s debit to inventory credit payable represented here by the 300. Just that one line item that being posted, then to the subsidiary ledger, not to the general ledger, we will be posting to the general ledger shortly, changing the balance from 1500 up by 300 to 1800 that we owe to Lh mg, we can then total this up. So the 1005 plus 900 plus 700 plus 300 gives us a total of 3400. So 3400 is the total. Now it’s the end of the month, and we can use that total then to record the general journal. So note the saving of time here, only one journal entry instead of in our case four, and depending on the process, if we’re buying inventory constantly throughout the month, this could save a lot of time and In a manual system, so now we’re going to record it just like it says up here, but not for each transaction instead for the total of the transactions. So we’re going to debit inventory. Remember, inventory is a debit balance account, we’re going to make it to go up by doing the same thing to it, which is a debit, because we’re buying inventory. And then we’re going to credit accounts payable.

Accounts Payable is a liability, liabilities, our credit balance accounts, we need to make it go up the bad things going up, we owe more money. Therefore we do the same thing to it, in this case, another credit, then we’re going to post this to the general ledger. So the general ledger inventory is going to go up. I’m sorry, yeah, inventories can go up. So it was at a credit of 1005 93. Now it was at a credit because we recorded the sales journal before the purchases journal. So it shouldn’t be the case that it’s not the case that inventory should ever be negative. If it is something’s wrong because inventory is an asset account, and it shouldn’t go negative. But as we record these transactions as we go when we, we might end up recording the sales journal before the purchase journal, and therefore we have a credit and then we’ll debit it out 3400 flipping the sign, so 1005 93 plus 3400. This negative plus that’s positive gives us a debit balance of 1000 807. 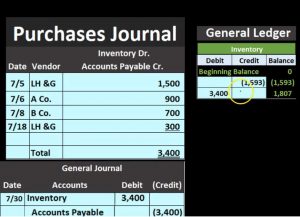 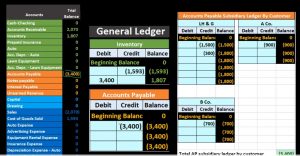 It has been recorded in the accounts payable journal so it’s on the in the purchases journal. So here’s the detail if we want to see it by date, but it’s not going to give us an easy breakout and by who owes us the money. We don’t want to see it listed by date. We want to see it listed by vendor. So here’s the same information by vendor, the accounts per se payable subsidiary ledger In other words, so l h and G owes us or we owe them 1800 a company we owe them 900 v company we owe them 700. If we add those up that adds up to 3400 which of course is matching what is on the accounts payable, General Ledger as well as the trial balance.