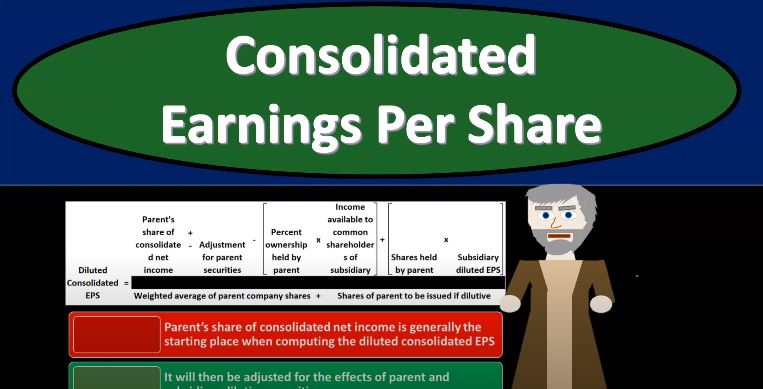 In general, even for a single organization or a single company, it’s going to be a little bit more complex for a consolidated entity. Even with a single entity, we’re basically going to take into consideration those types of securities that could dilute the earnings per share calculation because of a conversion or securities that can be converted then into the common stock things like bonds that can be converted into common stock or preferred stock. If we have those items. Those convertible securities can complex or make the calculation more complex for that dilute diluted consolidated earnings per share. When we do the same thing for a consolidated diluted earnings per share, then we have to think about those types of securities that can be convertible both on the subsidiary level, as well as on the parent level. So it can get a little bit more complex, or just a longer calculation to go through to think through this process. It’s useful to do it in a step by step systematic way, which we will do in a couple practice problems. So I recommend going through the practice problems, but we’ll just take a look at the formula here. So diluted consolidated earnings per share, we have the parents share of consolidated net income, plus or minus the adjustment for the parent securities minus the percent ownership held by parent times the income available to common shareholders of the subsidiary, plus the shares held by the parent times the subsidiaries diluted earnings per share all of this over the weighted average of the parent company’s shares outstanding plus shares a parent to be issued if dilutive securities are converted and options exercised. So again, that’s a long formula. We’ll do that in a systematic way. I think it’s easier to put this formula into basically, a vertical basic calculation doing this in a step by step process to think through it. So we’ll do that in the practice problems. Generally what will happen is we’ll we’ll start with the parents share of the consolidated net income. That’s generally where the starting point will be. When computing that diluted earnings per share. It will then be adjusted for the effects of parent and subsidiary, dilutive securities. So if you think about this from top to bottom type of calculation, we’re going to start with a parent’s share of the consolidated net income. And then we’ll we’ll go into and dig into in a systematic step by step way, the adjustments for the effects of the parent and subsidiaries dilutive secure, On it