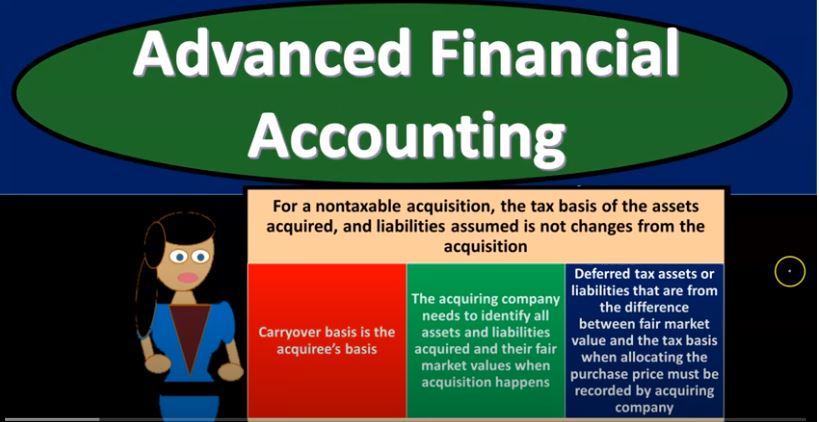 Advanced financial accounting PowerPoint presentation. In this presentation we’ll talk about consolidation and income taxes get ready to account with advanced financial accounting. For a non taxable acquisition, the tax basis of assets acquired and liabilities assumed is not changed from the acquisition. In this case, then the carrying basis is the acquire ease basis, the acquiring company needs to identify all assets and liabilities acquired and their fair market value when the acquisition takes place, and then the deferred tax assets or liabilities that are from the difference between the fair market value and the tax basis when allocating the purchase price must be recorded by the acquiring company. So we have the tax expense allocation. When consolidated return is filed. What are we going to do with this tax expense allocation, the parent company and subsidiaries can file a consolidated income tax return or they can choose to file separate returns. So this is one of the things that we kind of have to consider here we’ve got a controlling interest that’s going to be involved. So we have two entities, one has a controlling interest and the other obviously parents subsidiary type of relationship question, then should we report just one tax return? Or should we have two tax returns, this is going to be a decision that needs to be made. But if we file one tax return, then at least 80% of its stock must be held by the parent company or another company included in the consolidation return for a subsidiary to be eligible to be included in a consolidated tax return.

So in other words, if you’re talking about a consolidated entity, when do we have to make consolidated financial statements or when should we possibly when there’s a controlling interest? When does that happen? Usually over 51% because then you have controlling However, if you’re, if you’re deciding whether or not to file the tax returns as a single entity, one tax return for multiple entities or have separate tax returns, you need an interest of 80% in some way, shape or form. arm in order to file the one tax return. So obviously that’s a bit more restrictive that’s going to restrict your options as to whether to file one or two returns advantages of filing a consolidated return. So then you might say, Well, okay, what if I have the option of the consolidated return for taxes or filing two separate returns? What are the advantages and disadvantages? So we’re talking here about the advantages of filing a consolidated return, meaning subsidiary parent putting them together when return filed, losses on the company can be offset against profits of another. That’s pretty nice. So right, if you had a subsidiary that had a loss, then possibly you can take that loss then against possibly the parent company because you’re filing you know, the entity as if they are one entity. So dividends and other transfers between affiliated companies are not taxed and could help to avoid limits on the use of some items like foreign tax credits and charitable contributions. In other words, you know, if there’s an AGI limitation, adjusted gross income, limitation of phase out of some kind Then, then you know how having two entities together may provide more eligibility depending on you know, how the phase out works with your income limitations. So limitation on filing a consolidated return after an election is made to include a subsidiary in the consolidated tax return, the company may no longer file separate returns in the future unless it gets approval from the IRS. So you might think, okay, if I have this situation, maybe I work this thing out as if I file a consolidated return and then I work it out as if I’m not consolidated. And I do that every year. And then I find the one which is better, but you can’t really do that. Because once you make the jump, once you make the jump to the consolidated return, you’re pretty much you’re locked into that unless you get approval from the IRS which means you would need a reason because the IRS wants consistency typically. So once you basically go to that step once you basically make that move and you got it and if you want to unmake it.

You gotta convince the IRS and get approval to do so. And typically, you would think you would need a reason, you know, to make a change back. So the tax year of the subsidiary needs to be brought into conformity with the parents tax here. So if you had different taxes, in other words, then you would, you would need to obviously pull them into alignment. In order to file you know, the one tax return, it can get very challenging to prepare when there are a lot of companies involved. And you can just imagine the complexities obviously, one company’s very complex can be if you’re talking about a large company, if you’re talking about multiple companies, especially layers of companies within a single return, that can be difficult to do tax expense allocation when a consolidated return is filed. So income tax expense will need to be assigned to the individual companies because only one income tax amount is determined. So obviously if you put the tax returns together, and then you file one tax return, then you’re going to be coming up with one you know, income tax. expense amount. And then when you think about the financials, how are you going to record that on the financials, you’re going to have to then assign and have some method to assign that income tax expense out to the companies that will be involved amounts reported in the income statement of these separate companies and the consolidated entity entity can be affected by the method of tax allocation. So the amounts reported for the income statement and the separate companies and the consolidated entity itself can be affected by this allocation method. If the subsidiary is not 100% owned tax expense assigned to the subsidiary will will reduce proportionately the income assigned to the parent and non controlling interest. So obviously, if there’s not a controlling interest, then then when you assign the taxes out to the subsidiaries, which are not fully owned by the parent, but they have over possibly the 80% or they have the controlling interest, then then obviously you have to deal with that non controlling interest and there’s going to be effect and effect have applied those taxes out to the non controlling interest as well. unrealized profits when consolidated return is filed. So now I know you got this situation, you could have these situations where you got these intercompany basically transfers or transactions that could happen. And we talked about the situation where say inventory, went from one company to another company and the other company has not yet sold it to a third party. So for my current consolidation standpoint, you would think that there would be profit that that is on the books of one company that shouldn’t be there and the inventory would be overstated. What do you do on a tax return situation with regards to those kind of situations?

So the intercompany transfers will be eliminated when we calculate the consolidated net income and taxable income. So typically, if we’re, if we’re doing the consolidated entity, then we’ll eliminate those when we when we do the consolidation process. So you think about our consolidation worksheet in a similar fashion for the tax preparation and if you’re filing one tax return In one entity, then we will do the similar process in eliminating those intercompany profits. Since profits are taxed in the same period, they are recognized for financial reporting purposes, no temporary differences happen, and no additional tax accruals are needed in preparing the consolidated financial statements. So that’s what the consolidated entity and you can imagine, obviously, when we think about these worksheets, we already put the worksheets together, we dealt with these we dealt with these intercompany profits already, we basically eliminated them in the intercompany items. What happens However, if the unrealized profits when the separate returns are filed, so now we have two entities that we say we file a consolidated financials for, and we do our elimination entries. However, when they do their tax returns, they’re now going to do their tax returns separately. They’re not going to be consolidated together. But when that happens, that means that like one of the one of the returns, might have had sales that went to another return and they net and the other company didn’t sell Right, so you’ve got this kind of profit situation going on between the entities. So what happens with that? Well, companies are taxed individually on profits from intercompany sales, so they’re going to be taxed on it. Individually, they’re going to be filed when they file their tax return, no consolidation is given to no consideration is given to whether their intercompany profits are realized from the consolidated viewpoint. So they’re not looking at it from a consolidated viewpoint in this case, because it’s a separate tax return.

So there so if there was profit, then that was realized. Or if there was profit that went from one one company to another consolidated entity because we’re not looking at it from a consolidated entity standpoint, the consideration isn’t given there and you would think it would increase the taxable income and possibly the tax tax expense on the unrealized intercompany profit needs to be removed when the unrealized intercompany profit is eliminated in preparing consolidated financial statements. So now you’re gonna have a tax expense when you think about the consolidation process now. So now you’ve, you’ve got this added expense for the, you know, the gross income. And that’s a result that you’re trying to eliminate with a consolidation entry now, so now you’re thinking, if we’re going back to the consolidation entries, we have two separate tax returns, but we’re trying to consolidate this together for for the financial statement purposes. And now we’re going to when we do the reversals for like the gross profit, that that was an intercompany transfer of inventory. Now we also have the fact that there’s going to be a tax expense, you know, related to that, which we’re basically going to have to reverse out as well, the difference in the timing and the tax expense record recognition, we’ll call it the recording of deferred income taxes. So that’s going to result in us having these deferred income taxes.

So in other words, once again, you got we’re gonna do the consolidated worksheet, and consolidated financial statements putting them together as if they were one but they’re taxed as separate entities. And as they’re taxed at separate entities, they’re going to be taxed on income that could have been intercompany income that went from one company to the other company. And that’s going to result in a tax expense. That’s going to that’s going to be in the consolidation now, because it’s going to be on the income statements that we’re trying to consolidate for the financial statement purposes. So for financial statement purposes, we’re going to be removing the intercompany transactions, the profit that went from one company to the other, but as we do so, we should also be removing, you know, the tax effect that was included because they were taxed on on these items that shouldn’t that you know, is a deferred tax and that difference the difference in the timing and the tax expense recognized will cause the recording of the deferred income taxes.