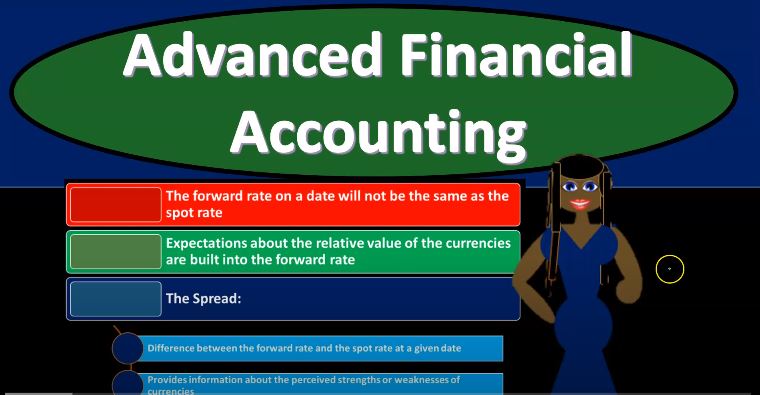 So typically, we can figure out what the exchange rate is at least on a specific point in time. And think about, think about what it would be then now of course, if we have accounts receivable or accounts payable, or if we’re going to get paid in the future, then the valuation has a little bit of a timing issue that we’ll have to deal with as well. So we’ll have to take those into considerations as we value the foreign currency transactions for our books, which of course we need to value them in US dollars. So foreign subsidiaries foreign subsidiary, Prepare financial statements into home currency. So, if we have a foreign subsidiary in another country, then they would they would basically be performing obviously their financial statements in their currency in a foreign currency with respect to the US company. So the foreign currency amounts need to be translated to US dollar equivalence, so they can be consolidated with the US parent financial statements.

So, if the US company has a subsidiary in another country that is conducting their books and their financial statements in a foreign currency, then we’re going to need to consolidate the books possibly and when we do that consolidation, we will need to take those foreign currency financial statements translate them into the US currency so that we can then conduct the consolidation process exchange rates foreign currency exchange rates are established daily by foreign exchange brokers who are agents for individuals and countries that want to deal in foreign currencies. Some countries maintain an official fixed rate of currency exchange They have established a fixed exchange rates for dividends remitted outside the country. And exchange rates will change based on many economic factors affecting the supply and demand of the currency of a nation. Some factors include, we’ll get into those factors in a second, but just note that when you’re thinking about the foreign currency exchange rates, basically you’re you’re basically thinking about a market. So there’s a lot of factors that will be involved in it. But similar to other other types of transactions, we’re basically saying, you know, foreign currencies are being exchanged in a similar way, from an economic standpoint as basically other things like stocks and other types of investments. And And because of this, the sameness to the one of the characteristics of currency being that it’s, it’s something that has a value that’s constant. So we know that $1 is the same as another dollar in terms of value. That means that we can value our currency because we have a market that’s currently exchanging Typically, and therefore, we can basically value our currency in a similar way as if a stock is traded on a stock exchange. We know the current value of the stock. Why? Because it’s currently being traded for that, and all the common stocks are the same. That’s the point of the common stock. So we have a similar situation with the currency so we can basically value the currency.

So you can see that who’s been directed at when we’re thinking about are we using the direct exchange or the indirect exchange rate, you’re trying to make it as easy as possible from the perspective of the user being, you know, the primary user being in the in the dollars or in the, in the foreign currency, the terms currency is the number is the number, the numerator, the base currency is the denominator in the exchange ratio, then we want to think about the concept of weakening of the US dollar versus strengthening of the US dollar. So when we think about this examples of our is the currency getting weaker and stronger, this really gets more solidified. When we do actual practice examples when we actually use these rates, within example problems, you’ll get a much better feel if you actually worked through The example problems of these concepts of what when when $1 is getting stronger or weaker? And then you’ll be able to answer these questions on a on like a theoretical term type of basis, a multiple choice type of question much more easily. So we can have the US dollar when the direct exchange rate increases. So when we’re thinking about the direct exchange rate, for example, our example was $1 and 20 cents for a pound. If it was, if it went up, if the direct exchange rate was $1 and 50 cents or $2 for a pound, then you have a weakening of the dollar because it’s costing more dollars to get one unit of the next unit whatever other unit in this case the pound strengthening of the US dollar, the exchange, the exchange rate decreases, so obviously, the inverse would be the case for a strengthening of the dollar. In other words, in our example, it took $1 and 20 cents to get one pound. If it was going to go down in the one pound only cost us $1 instead of $1 20. Now one pound is is costing less to us. So for example, if it only costs us 50 cents to get one pound, it went from 120 down to 50 cents. Well, now we have a strengthening of the dollar in relation to the pound.

So we are currently transacting today. So we have a pretty solid market transaction going on there because the actual transactions are being made. But predictive transactions are being made as well about the the predictive foreign rates into the future. So these are going to be expectations about the relative rates for currencies are built into the forward contracts. So the spread then, is the difference between the forward rate and the spot rate at a given date and provides information about the the perceived strengths and weakness, weaknesses of the currencies. So you can basically kind of read into that when you’re looking at the forward rates versus the current spot rate, what people think about about the currencies, what are going to be the strengths and weaknesses, given the differences in those amounts, because obviously, if everything was static, then you would say the forward contract rates would be the same as the spot rates, the rates that were predicted in the future would be the same as today. Like, obviously, that’s not typically going to be the case almost never is that the case. Let’s take a look at a quick example. So let’s assume a US based company purchases inventory for 1000 pounds on 331. And the contract requires payment on 930. So in other words, we have a purchase taking place, if you remove the currency, I think the foreign currency would just be we’ve made a purchase on account, right, we made a purchase on account, we’re going to get inventory and then we’re gonna have an accounts payable that we’re going to pay at a later time we’re going to pay it in 180 days on 930. Now then you add the foreign currency component to this, when you make the payment on 930. It’s not going to be in US dollars, you’ve agreed to make the payment in pounds, so you can have to pay the $1,000 in pounds 180 days from today. So typically the point in time that on 330. If we’re saying the spot rate at that point in time, we could say is 1.3 $5 to the pound. And that’s typically what we’ll put the inventory on the books for at that point in time. If you think about 180 days forward, meaning what will What? Where will we be? Or what’s the predicted rate as of 330? What’s the predictive rate that it will be four 930, when we’re actually going to make the payment in pounds, because we’re gonna have to pay this thing in pounds 180 days later, then that’s going to be the forward forward rate, which is going to be in our example 1.4 dollars to the pound. So then the difference then is what we would call the spread, the difference is going to be the spread. And that’s basically the market you know, predicting the strengths and weaknesses of of the relations of the currency. Now, from an accounting perspective, the question of for us is obviously going to be well, okay, I’m trying to put the inventory on the books here and I’m trying to make a payment in pounds over here. How am I going Going to how am I going to account for this thing, and that’s what we’ll get into. And it’ll look a lot easier to do when we do the practice problems, this will all come together a lot more for you.

So I highly recommend working through the practice problems. And as we do so, the questions then will be well, when you know if there’s a timing difference, if the exchange happens right now, then there’s no real problem, we’ll use the spot rate. But if there’s some type of timing difference where the payments going to happen in the future, or if we have a forward contract, or we’re trying to hedge something or something like that, then we have these predictive rates. And then the question is, do we use the spot rate at this point, or do we use the forward the forward rate? And so those are some of the concepts we’ll get into and like I say, the best way to get into those is just to work through practice problems.