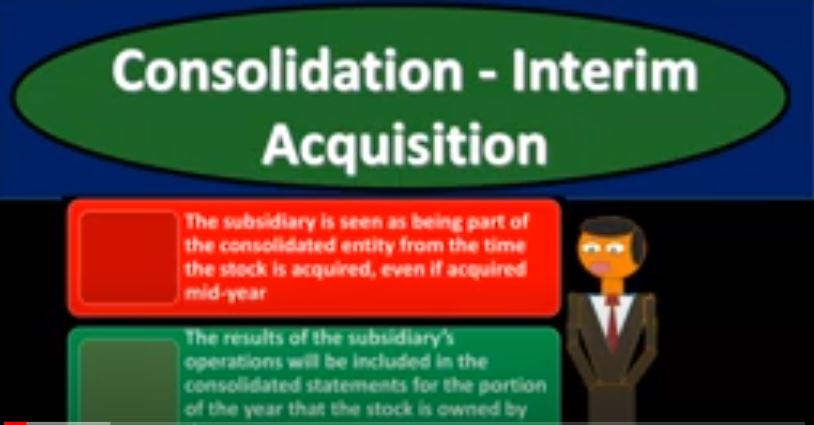 So in other words, obviously, if if the consolidation took place, if we purchased if the parent company purchased a controlling interest of the common stock in the subsidiary, after the first quarter, let’s say, of the current year, then that first quarter within that first quarters time period, they’re not really considered to be you know, a consolidated component at that time. Obviously, they’re not, you know, together there’s no consolidated entity as of that point in time. So the subsidiary then will only be seen as part of a consolidated entity part of the basically the parent company. From the time of the stock acquired, and that means in that case, it would be the last three quarters. So if you’re talking about a year’s financial statements, then you would think Alright, well now that means that only the last three quarters of the subsidiaries data on the subsidiary information is going to be consolidated into the consolidated financial statements, the result of the subsidiaries or port operations will be included in the consolidated statements for the portion of the year that the stock is owned by the parent. So we’re only going to include then you’re going to think so you got to think about and we’ll do a practice problem on this. I highly recommend going through the practice problem and looking this out, in theory, but obviously, when you think about it, you’re gonna say alright, well that means that if I look at a year’s worth of data, and the first quarter the subsidiary wasn’t included, then I’m only basically you would think I’m including basically the last three quarters of the data from the financial statements into the consolidated financial state.

Obviously, the time mean statements. The income statement then is what’s going to be primarily impacted where you’re taking it, what the performance was over time. And then you’re going to have to account for that. And we’ll take a look at the practice problem in order to practically account for so you kind of visualize what has happened. And you’re saying, All right, well, they purchased it after the first quarter. So that means that the subsidiary last three quarters of the performance, especially statement, the income statement are what’s going to have to be included in the consolidation. So what’s that going to contain? From a logistics standpoint? How are we going to do with that with a consolidation worksheet? Well, we’re going to have to basically somehow eliminate right that first quarter, so we’ll have to think about how to do that with a consolidation process. We’ll do that with a practice problem. Highly recommend checking that out