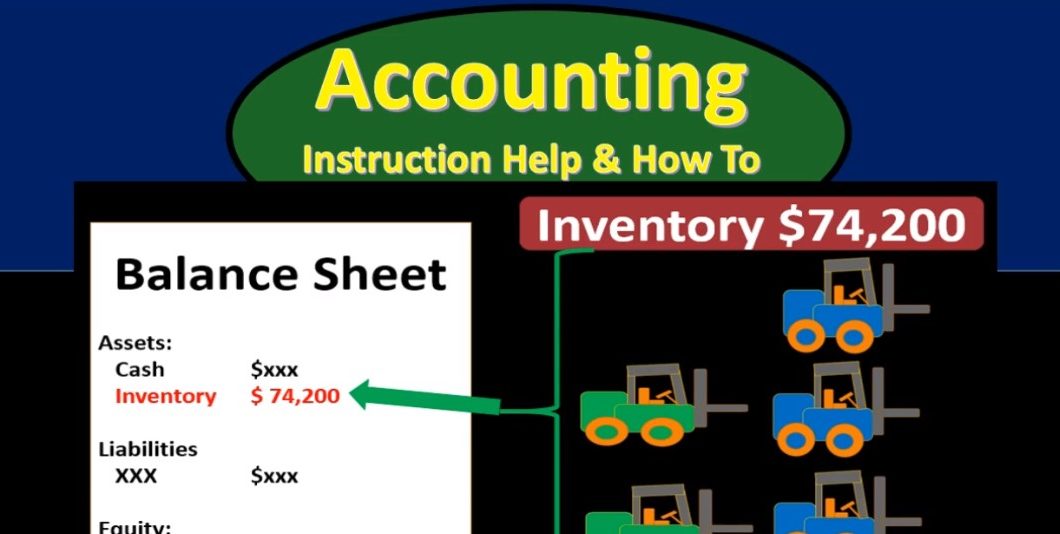 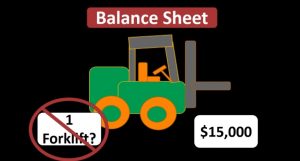 And that’s those are the problems we’ll deal with as we go through some of these inventory tracking. The reason we know it’s 15,000 at this point in time is because we purchased it for 15,000. On a free market, we could have purchased it with cash or we could have purchased it with some combination of cash or something like credit, but the purchase price on a free market gives us that $15,000 amount that’s 74,200 of inventory reported on the balance sheet in terms of dollars, backed up in some way by these five forklifts. Now the problem happens when we actually sell the forklift. Let’s say we’re going to sell this one particular forklift to the customer. We know what the sales price can be, because we’re going to come up with the sales price. And that’s not a problem. The real problem is going to be the cost.

What What is the cost of that? How much of this 74,200? Do we need to reduce it by when we sell that one forklift? And we might say, Well, why don’t we just take the five forklifts and say it’s the total was 74,200 and divide it by five and say that one forklift is worth 14,008 40. That is one way we can do it. That’s a form of of averaging the method. But we might do it a different way. In this particular case, we might take this 74,200 assign identification numbers and say this is ID number one, ID number two, and so forth. That will allow us to assign specific dollar amounts meaning that number one cost is 15,000. Number two causes 14,006 number three causes 14,400. Meaning we’re going to specifically identify specifically track this information. And track it by the actual cost of that individual item. That’s going to be called specific identification. If we do that method, then we can say, okay, that particular forklift number one, the one we sold, that one cost 15,000.

If we go to the journal entries, it’s important to note that there’s a distinction between the cost and the sales price, the sales price might be based on the cost. And so for example, we might have the cost and have some particular markup like a 30% markup, and that might be how we come up with the sales price. But note that the sales price is different than what we’re typically doing and tracking the costs. And when we move to cost tracking, that often gets lost. So let’s just say that we’re going to record the sale First, the sales The 16,000 has nothing to do with the inventory cost in this particular problem. We’re going to give that here we’re going to say 16,000 accounts receivable, we sold it on account, and sales go up by 16,000. Where our tracking comes into play is when we’re going to say okay, how much does inventory go down by it goes down by that 15,000 that we sold The related Cost of Goods Sold will be going up bringing net income down.

So we’re going to say that inventory then is going to be reduced by that particular item for $15,000 worth of forklift Enos. And the expense of cost of goods sold is going to go up by that 15,000 bringing net income down. And of course, the sales on the income statement is going to go up by the 16,000. So there’s a net gain of the 1000 net income effect in that case. So now we’re saying that that 74,200 is now going to be backed up by our subsidiary ledger backed up by ID number backed up by specific identification added up to 14 six to 14 for the 14 to the 16,000, giving us the 59,200 in inventory after that sales point that 59 200 then is of course what will now be on the balance sheet. Now what we’ve used here is specific identification. The reason we would do that is because the forklifts are fairly large. We probably don’t have a lot of them in comparison to other types. of inventory and they could be different in nature, they might not be exactly the same, they might have different colors and different features.

If we were selling something that was completely the same, and we had a whole lot of them things like coffee mugs or something, specifically identifying all the coffee, mugs like this might be not worth our time. Therefore, we might not want to track exactly which coffee mug we then sell. If we have small things that are going to be all the same, we might want to use some estimating method. And those estimating methods will be things like first in first out the average method and last in first out which we’ll talk about next time.