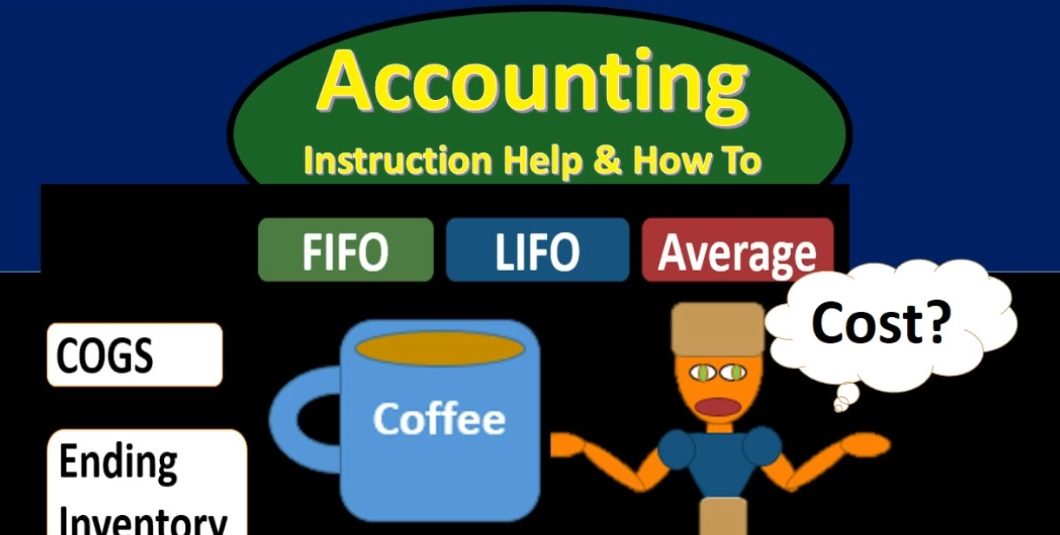 Hello in this lecture we’re going to talk about estimating inventory methods methods such as first in first out last in first out and the average method. Last time we talked about specific identification when we were selling the inventory of forklifts. We use specific identification meaning we had an ID number for each particular forklift and knew exactly which forklift we sold and the cost of that particular forklift. reason that makes sense for forklifts is because they’re relatively large, they could be distinct in nature, and they have a fairly large dollar amount in comparison to other types of inventory. If we’re selling something else, like coffee mugs over here, we may have a large amount of coffee mug they may be all completely the same.

And therefore for us to give them all identification numbers and try to track exactly which mug we sold and the cost of that particular mug may not be a good use of our time may be better to use some type of estimating method in that case, being first in first out last in first out or an average method. So let’s Compare and contrast those methods briefly and then we’ll go into more detail at a later time. And this example we’re going to say that we purchased inventory in terms of coffee mugs, we’re going to buy and sell coffee mugs. In January, we bought this many coffee mugs like eight or something here at $1.

Then in April, we bought another amount of coffee mugs like five more at 120. point being that the coffee mugs are going up in price even though they’re exactly the same, the cost is going up. That’s going to be the typical assumption. all else equal prices go up. Why? Because of inflation, the value of the dollar goes down, the price could go down as well. If for example, the gloves or something a coffee mug became cheaper for that the norm would be the prices go up and then everything would be reversed if prices go down. That’s how I like to think of it at least. Then in July we purchased another bunch of coffee mugs at $1 $1 50 price going up again, we haven’t sold any coffee mugs yet in this particular example Were stockpiling them, expecting to sell them at some particular point in time, we now have on our balance sheet $23, which would be this number of coffee mugs times $1 plus this number of coffee mugs times 120 plus this coffee mug times 150. That’s the $23.

We have on our balance sheet as inventory at this time, we then have a customer asking for a coffee mug, we make our first sale of the coffee mug, we’re going to sell them off for $5. That’s not the issue here. The issue is, how much is the cost of that coffee mug? What’s going to be the cost is that $1? Is it 120 is it 150 we’re not going to use specific identification. I’m not going to say what let’s see which actual mug was picked here. We’re going to first use first in first out as our first example. And in that assumption and it is just an assumption, we’re going to assume that that coffee mug was taken from this area in terms of $1 being the cost rather than 100 rather than 120 rather than 150. This is the most intuitive method for most people to undertake. Because it usually follows what we think of as a normal flow of inventory, we would assume that we would try to sell the oldest types of inventory first, even if they’re non perishable, something like a coffee mug.

But it’s important to note that this is just an assumption. For example, if we put all the new, all the old coffee mugs up front on the shelf and the new coffee mugs on the back, it is possible for the customer to reach in the back and take the old coffee mug, it’s important to note that we are not talking about the actual flow of coffee mugs, although this may mirror what we try to have the actual flow to be, but it is just an estimate. If we have that estimate, then we’re going to say that the sales price is is $5. So we’re going to say we sold it on account here, we probably would have sold it for cash, it’s a coffee mug, but we’re gonna sell it on account $5 going up for accounts payable sales goes up by that $5 that has nothing to do with our costs. We might have used the cost in order to come up with that $5 but has nothing to do directly with the cost.

What we’re tracking now is the inventory being reduced in this case. By $1, rather than 120 rather than 150 under the first in first out method, and the cost of goods sold being the $1. So the expenses are going up by $1, we’re going to reduce our inventory by that $1. That means that if we look at what’s left, we’re going to say the inventory was at 23, minus at $1. We now have Indian inventory of the $22. At this point in time under the first in first out method, we could make another assumption, though, we could say, Well, why don’t we assume under a lastin first out method, that this particular coffee mug that we sold this first one was taken from the last batch that we bought the most expensive batch, in this case, at the 150. Most people kind of bulk at this one because they say, Well, that doesn’t really make sense. We were trying to sell the old ones first.

That might be the case, but you can make a reasonable argument to say hey, if it’s just an estimate, I don’t know which coffee mugs we sold. It’s just as reasonable assumption to say that a coffee mug down here was sold out As a coffee mug up here, why would we want to make that assumption? Well, in terms of rising prices, we’ll see that what will happen is that our net income will actually be reduced. So it’s possible that this method came up through taxes have a need a desire to have a lower net income, but we’ll discuss that later. It’s a good example in terms of difference in methods and how a different method can result in differences on the financial statements and differences in net income.

So if we make this assumption, we have the same sale, we’re going to say we’re going to sell it for $5. The sales price isn’t going to be affected by the type of method that we are going to use, but the inventory is now are going to go down by 150 rather than the dollar, the cost of goods sold is going to be 150. So the expenses higher making net income lower what happens to our balance sheet account? Well, we were at $23 given us a 2150 that is left in Indian inventory after the lastin first out assumption. Last assumption we can have is going to be somewhere in the mix. And we call that the average. So we can use the average method. And we can say, Hey, you know what, I don’t know which mug we sold. I don’t know which if we sold the dollar mug or the 120, the 150. I’m not going to go in there and figure that out. I’m not going to make an assumption. We’re going to say that we sold mugs that cost Yeah, about 121 is going to be somewhere in the middle.

Now how do we get that average, it’s not going to be adding the one to 120 to 115 divided by three, what we would have to do is take the weighted we’d have to say that we have to take this number of cups times one plus this number of cups once one plus this number of cups times 150. And divide that dollar amount by the number of cups. But we’ll talk about that later. What we need to know now is that we can say whatever we pick up we sold it cost about now 121. And if we record that then same sales price, but now the inventory is going down by 121. And the cost of goods sold will be that 121 what’s left on our balance sheet. Then we have the inventory at 23 that One cup is now bringing it down to 2179. So the essence of this is that they are estimate. So if we look at just the recap, in terms of rising prices, this is how things will always be if prices go down, you want to flip everything meaning cost of goods sold under first in first out, was $1, under lastin. First out, it’s always going to be higher in a period of rising prices. When the prices go up.

As we purchase it, the middle area is going to be the average. So the average is always going to be in between, then we’re going to have the ending inventory, what’s going to be left we want to know both the income statement side cost of goods sold, and the balance sheet side what’s left on the balance sheet, and what’s left under FIFO 22. What’s left under FIFO 2150. And what is average? It’s going to be somewhere in the middle. This is what’s left on the balance sheet. Then we’re going to say net income what was the impact on net income? Under FIFO. We had $4 net income under law We had the smallest amount of net income 350. And under average, we have the amount in the middle at 379. You can see that in a period of rising prices a normal time period FIFO actually makes us look the best meaning our net income is the highest and our ending inventory is the highest and life lastin first out will make us look the worst meaning our net income is the lowest and our ending inventory is the lowest and the average will always be in the middle. If prices went up, all that would be flip flop.