In this presentation we will discuss the concept of lower of cost or market. We will define this concept first and then see it and talk about how it would apply to inventory. The definition of lower of cost or market according to fundamental accounting principles, while 22nd edition is required method to report inventory at market replacement cost when that market cost is lower than recorded cost. So, what we’re saying here is we have we’re talking about the inventory, of course, and we’re saying that we have to record it at the replacement cost. When that replacement cost that market cost is lower than the recorded cost, what we actually purchased it for. So this looks like a confusing type of definition. However, it’s pretty straightforward. What we’re applying here is going to be the conservative principle meaning that if our inventory has declined in value, we have to record it at the lower cost. We don’t want to be overstating our income mentoree obviously regulations are very concerned about us overstating something, when we’re talking about an asset, and making the financial statements look better than they would rather than understating it.

And therefore what we want, what we’re wanting to default to for this concept would be under recording the inventory, rather than overstating the inventory. And therefore, we want to record it at the lower of the cost or the market value. To apply that if you see problems such as this, of course, they’re going to give you basically two numbers that we’ll have to be able to compare. And it’s as easy as basically picking the smaller numbers. So if we bought it at cost, this is our inventory. This isn’t a piece of merchandise. This is not a piece of equipment that we’re selling. If we buy and sell forklifts and they are our inventory then if we bought that forklift for the 15,000, but the replacement cost is only 12,000. Then we’re saying that it went down in value and we shouldn’t be Keeping the inventory on the books at 15,000, which would be the general rule, the default rule, meaning we keep the inventory on the books at cost, if the replacement cost has gone down to 12,000.

It’s important to note here that we’re not talking about the sales price. So we’re not saying that the cost is what we’re selling it for, we’re not selling our inventory, in this case, the forklift for 15, we would have marked it up for something of the sales price, we’re talking about the cost of it, what it’s on our books for. And we’re saying that, well, if it costs 15, and we can buy the same inventory for 12, then we should be putting that inventory on our books for a lower amount. And if we were to sell it, of course, it’s probably the case that there would be a relationship to the sales price, the sales price probably is something that would have to be lower than the original sales price that we would have had when we had bought the merchandise at 15,000. 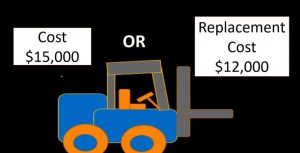 But this problem once again, has to do with how much we’re reporting our assets on The books for which is not the same thing as the sales price, it has to do typically with what we bought it for, that’s going to be the default. But if we’re saying it went down in value, given the fact that we bought this inventory specifically for selling it, if the purchase price went down, then you would think that the inventory has declined in value and therefore we should not be holding it on the books overstating our assets by keeping them at cost at 15. But putting them on the replacement cost, what the inventory what the same inventory, the same forklift in this case, would cost if we purchased it at this time. To make that decrease, of course would make the financial statements look a bit worse, we would have to decrease the inventory, lowering the amount of assets that we have on the books and record some kind of loss lowering the net income come at the point in time that is determined the replacement cost is less Then the cost that we pay for the inventory