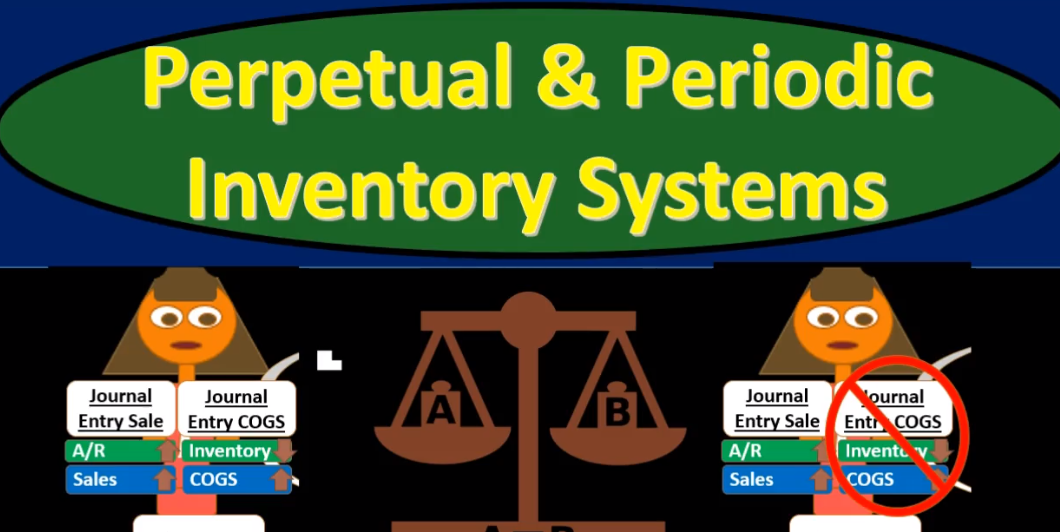 In this presentation, we will compare and contrast the perpetual and periodic inventory systems as we track inventory through the accounting process. First, we’re going to look at the perpetual system, the system we typically think of when recording transactions that deal with inventory. So if a transaction doesn’t say it’s using a periodic or perpetual system, you probably want to default to the perpetual system. We have here the owner, we have the customer, we’re saying that we’re selling this inventory this Inc for a cost of 8450. To the customer, the customer is not paying cash but pain, an IOU to the owner. Typically, under a perpetual system. We break this out into two components one, the IOU, or the accounts receivable or sales component. The component similar to what would be seen if we were not selling merchandise but a service company.

The second component, the service, journal entry we can think of and breaking this out into a separate journal entry would be the reduction in inventory, and the related cost of goods sold the fact that we’re giving the ink and recording the expense related to it. So if we consider those two, then the first journal entry we’re going to think of and remove, I would think of it as removing the inventory component as if we were so solely a service company. And then think of a second journal entry, the second half of this transaction being the inventory component. So if we removed inventory in the inventory accounts, we would say if we made a sale, if we did a service sale, then the accounts receivable would be going up by that 8450. And we would have the sales or revenue going up. And a service company would just be a different name and probably called fees earned or it would be called just revenue or income. In a merchandising company.

Oftentimes, we will see it’s called sales, but it’s just a word. revenue account and it’ll go up the other side, then we can think of and this is the difference this is the side that will differ between the perpetual and periodic systems will be that related to the inventory accounts. So this is going to be what I’ll call the cost of goods sold entry. That’s going to be the fact that inventory is going down, we gave away inventory, therefore it’s going down. And we have a related cost that will be going up the cost of goods sold. Now the inventory is not going to go down by the sales price. And that’s kind of the point and that’s the reason we may use a periodic system as opposed to a perpetual one is that oftentimes the person making the sale depending on how sophisticated our system is, may not know the cost. It’s not on the inventory itself. So unless we have an electronic system that knows the costs, or we only sell one particular thing to make it easy to record the cost. That’s why we may use a system that doesn’t record the second half a periodic system. Just record it at the end of the period at the end of the time period. So this is going to be the defining factor.

If we have a system that’s sophisticated enough to record this as we go, then we would like it to do so because that will be a more accurate system throughout the time frame. If we look at those two transactions, then there’s we’re going to analyze these journal entries, this would be the entire journal entry. accounts receivable is going to go up by that 8004 50 sales is going to go up with a credit of the 8004 50. This is going to be the part that’s related to the sales component. Then we have the cost of goods sold component which I typically think of the inventory first merchandise inventory going down with a credit 6500 related expense cost of goods sold, increasing, bringing net income down. If we analyze this we can say okay, what’s happening to the assets. Then, with these two journal entries, remember that this journal entry is the one that is different between the periodic which We’re talking about now and the perpetual, which we’ll talk about in a second. So the assets here are going up by the accounts receivable. And they’re going down by the merchandise inventory. 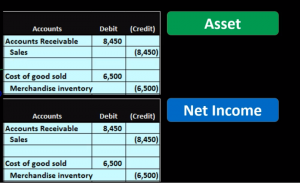 So the net effect then in the total assets is the difference of 1950. We got something we got an IOU, we’re going to get cash, hopefully, and the inventory went down. Hopefully we got more we’re going to get more money than the cost of the inventory was that we gave up the net assets then increasing the other side, we can think about what’s happening to equity or the income statement and net income. We can say okay, well sales is going up by that 8004 50. And the cost of goods sold what we gave up the expense related to what we gave the expense related to the inventory, the cost of that inventory is going up, which brings net income, net income up. Now this one might be a little bit more difficult to see here because we know that sales is increasing with a credit sales has a credit balance, it goes up with credits, we’re increasing sales. The other side is we’re increasing cost of goods sold. Now that’s an expense and net income is calculated as revenue minus expenses.

Therefore, the fact that cost of goods sold is going up is going to bring the net income down. So revenue is bringing the is going up, cost of goods sold is going up. But Cost of Goods Sold going up brings net income down, therefore, we’re going to subtract the two and we have the difference the increase in net income of 1009 50. That increase in net income because net income is a part of equity will also be an increase in equity, and therefore, these transactions will have an increase in the assets of the same amount as the increase in the equity section. If we look at a periodic system, we can think of this same sale in terms of a periodic system rather than a perpetual one. If that’s the case, we’re still going to have the first journal entry we’re going to say okay, we still have the accounts receivable going up, and we have the sales going up. But you’ll recall the Second journal entry we will not have Remember, if it’s a perpetual system, we would also record the second component at the point in time that the sale was made, we sold the ink, we gave away the ink, we got the receivable, you would think we would record the reduction in inventory and the cost of goods sold at the point of sale.

But in a periodic system, we do not we only record the first component Why? Typically that would be because possibly, our system is not sophisticated enough, we may have a system where we have someone like like a clerk basically making the sale possibly in and they only know the sales price, unless they have a scanner or something that knows the cost of goods sold. They don’t know what the cost is, and therefore don’t have the ability to record it. Also want to be focused on the selling of it and just giving the change back or completing the transaction in any format that can be done. Therefore, unless there’s a sophisticated system to record it, usually A digital one, a periodic system might be used in that in that system. If we do have a sophisticated system, we would want to record this at the point in time of the sale in a perpetual system. If we don’t, we can just record the first component, the sales and the accounts receivable, which is on the inventories, the sticker price of the inventory.

And then we’re going to do the physical count. And we’re going to say the inventory per account in this case is 25,000. Then we can subtract the two and we assume that we sold then 75,000. That would be the adjustment or the cost of goods sold adjustments, therefore, we would debit cost of goods sold 25 for the 75,000 and credit inventory for the 75,000. Note there’s a couple things to note here. One is that we’re assuming that this is what we had available for sale, this is what the count was. So the difference then Assuming we sold those, it’s possible that we had a loss or something like we lost some of them or or they spoiled or something like that. And so that assumption might not be wrong, but we are hoping that that kind of shrinkage would be small, and therefore not a material factor in our recording of this transaction, the second component of the transaction.

So it’s also important to note that as we do the physical count here, we emphasize the physical count as a necessary part to the periodic system apart that which if we did not record, we would not know that cost of goods sold or inventory can lead us to start to think that the perpetual system has no use for a physical count, because it does record the decrease in inventory as we go through. And note that that is not true because of course, there could be something like shrinkage or theft or something like that. And a perpetual system. The physical count will be used in order to double check that the inventory is Correct to check to see whether or not there were problems problems such as shrinkage problems such as spoilage, theft, breaking inventory, and it’ll be able to pick those components up those pieces up.