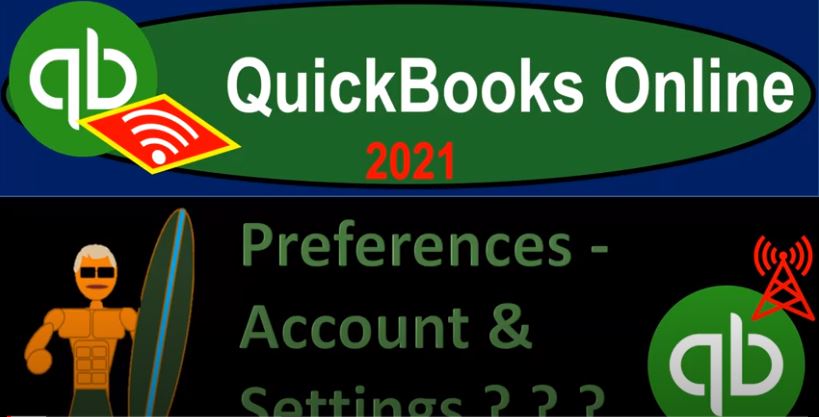 QuickBooks Online 2021 preferences, account and account settings. Let’s get into it with Intuit QuickBooks Online 2021. Here we are in our Google search page searching for QuickBooks Online test drive. And then we’re going to be picking QuickBooks Online test drive for Intuit, the owner of QuickBooks, we’re gonna verify that we are not a computer, or a robot, kind of the same thing, I guess, I mean, a computer can be a robot, but a robot doesn’t necessarily have to be. But in any case, we’re here on the Craig’s design and landscaping services, we want to touch in on the preferences or account settings, because when you set up a new company file, this is often one area that you’re going to zoom in on towards the beginning of the setup process.

If you’re going to work for another company that already has the file been set up, then you’re kind of locked into the preferences that they will be having there. Now that’s similar to the situation that we’re gonna start off with when we’re practicing the navigation. In other words, it would be similar to going to work for somebody else, or picking up a set of books that have already been set up, and then trying to learn how to work within the system that has already been set up how to navigate the software that has been set up and and go through the information within it.

If you want to jump to that area, if you want to start a new company file and then go right to the preferences and then think about possibly bank feeds and go as quickly as possible, then you could jump to the second half of the course, where we go over setting up a new company file, we’ll do so with the 30 day free trial. And then we’ll take a look at the preferences within that system. And then if you wanted to jump down to the bank fees and just set up the bank feeds, then you can go down to the bank feeds settings and go right into those areas. However, if you’re a beginner,

I would recommend going through the whole process here going learning the navigation, and then setting up a new company file and then doing the bank feeds. So I’m just going to do a quick comparison of the QuickBooks Online and the desktop version. So you could see where they’re located in both locations. So if I go to the desktop version, we would go to the Edit drop down and the preferences down here, this is where the normal preference window would be. And you’d have all these items on the left hand side, and then the preferences related to them on the right hand side.

And so you’d want to basically most of these are pretty good out of the box, or when you first set them up pretty standardized. However, some of them you might want to change and customize them to the business type that you are in or just to your individual preferences on how you like to see things. And so those references are a little bit differently named and located over here on the online version. Most of them are many of them are in the little cog up top. And then you would go to the company, your company and then account and settings.

And once again, we’re going to go to the cog, we’re going to go to your company and then account and settings. Note that if you’re picking up the company file from somebody else, if you’re working somewhere else, then you’re probably not going to be changing these settings, they’ve already been set up the way they’re going to be set up for the most part. And you’re going to be moving forward with a data input that will be over here, you know, creating invoices and navigating generating reports, which we’ll talk about shortly. If you’re setting up a new company file, then you might want to verify your account and setting preferences which once again, we’ll talk about in the second half of the course when setting up a new company file.

So let’s go into those items. Now. Just a quick overview. So we have the tabs on the left we have the tabs on the left for the company, we got the company name and information here, the company type, we have the contact information, the address, the address could be important that we would need it for the forms that we’re going to give to other people such as invoices and whatnot, communications with Intuit down below. Then we have the second tab on the left, this is going to be the usage, billable users Chart of Accounts and so on and so forth. This will be looking a little bit different on the paid version you’ll have some more information about your usage and whatnot. And then the sales items we have the Customize up top customize the way forms will look to your customers so you can do some

This is one way to get into the customizing a forms on the sales side possibly thinking about things like invoices and sales receipts, the bills in essence, you’re providing to the customers and then we got the sales form content. So the preferred invoice terms, these are the terms of the invoice preferred delivery method, whether you have shipping on or off custom fields, custom transactions, service, date, discount and so on. We got the products and services then Show product service column on the sales form. We have that on you can turn these on or off, of course, and then turn on price rules track quantity and price rate, track inventory quantity on hand.

So are we tracking the inventory or not? Do we have inventory Do we need to be tracking inventory, that’s going to be a key point. And we’ll talk about that when we go through the practice problem. late fees, and then we have the progress invoicing if applicable, turning that on and off messages, reminders, online delivery. And then we have the statements show aging table at the bottom of the statement, we have the expenses side of things, purchases, expenses, these are things that we buy with regards to bills and expenses, show items table on expense, and purchase forms, track expenses, and items by customer make expenses and items billable.

We’ll talk about those in the future, when we get to those components, purchase orders, and then we have the messages. And then we have the advanced settings here including the account settings, first month of the fiscal year, most sole proprietorships will be on a 1231 or calendar year, meaning the last month will be December 31, January 1 through December 31. The entire year, then written note that they are asking here for the first month, meaning if you’re on a calendar year in December 31, your first month would be January. So for most people, that would be the default setting January. If you have a different fiscal year, then you want to this is where you would go first month of income tax year same as the fiscal year.

So if you have questions about that, you might want to discuss that with an accountant or something like that, because that’s confusing to some people, we’ll talk about it more in depth. In the future company type tax forms, we have the chart of accounts enable account numbers, account numbers can be very useful, we might have another section that will include on just the use of account numbers, but they can also be complex default then usually has the account numbers off discount account tips, billable expenses, we have the categories class tracking, great feature in and of itself, the class tracking and also the track locations.

So these are items that we might spend a bit more time on in the future, they’re specialized to certain industries or certain fields, or when you expand and have different departments class tracking track locations can be quite useful automation prefilled forms with previously entered content. So this is going to help you to basically do data input in the future by basically seeing what you did in the past and kind of trying to guess what what you’re going to do in the future by looking at the prior transaction, say, for a particular customer when you enter an invoice or a particular bill. When you’re when you have a particular vendor related to it, it’ll try to memorize the transaction.

So these can be useful and the default settings are typically pretty good projects organize all job related activity in one place projects is another custom area which we might spend some time on in and of itself in a later section just focusing in on the project’s time tracking at service fields to timesheets, so we could track time within the system use time tracking to help us to populate our invoices, possibly, if we’re billing based on hours. We’ll talk a bit a little bit about that as we go forward currency, home currency multiple currencies, where we may have a court we have a course on the desktop version for multiple currencies.

So if you have transactions, say accounts receivable, that you’re going to get paid in a in a foreign currency or you’re paying in foreign currency, then you can track those transactions with multiple currencies functionality, and specialized area once again, we might take a look at that in the future, in a section in and of itself. And then other preferences date format. How do you want the date to look month date year? The number format

How do you want numbers do you look Do you want the decimals and commas or in other areas you might have a you know a period where the decimal should be and whatnot. Customer the customer label, warn if duplicate check numbers, that’s a good default setting. Warming if you have duplicate bill numbers and sign me out inactive for one hour. You do want to have some kind of default setting for the system to log you out.

And whenever you leave, you do want to log out of the system normally to to make sure that no one you know is messing with stuff, but the default setting to log off is good. So that’s just a general recap. We’ll go into that in a lot more detail in the second half of the course when we start a new company file.