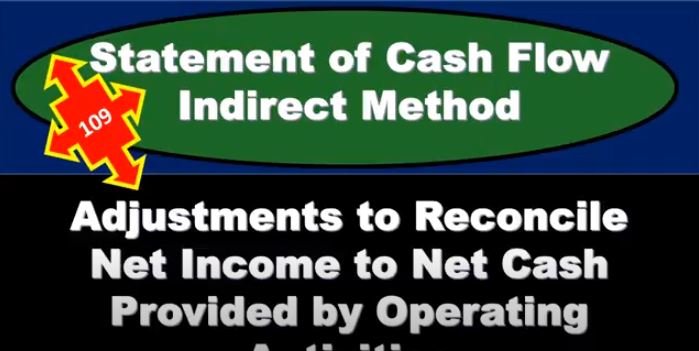 In this presentation, we will continue putting together a statement of cash flows using the indirect method focusing in on adjustments to reconcile net income to net cash provided by operating activities. So this is going to be the information we will be using, we have the comparative balance sheet, the income statement added information, we took this comparative balance sheet to create our worksheet. So here is our worksheet for two time periods. This is the difference we’re basically looking to find a home for all of these differences we have done so with cash, and we’ve done so with a difference in retained earnings. So here’s cash, here’s net income, the difference in retained earnings, we will have to adjust net income shortly or at the end of the problem. We’ll we’ll take a look at that we’ll make an adjustment for it. We’re going to now find the difference for all the rest of these. Also note that of course cash is going to be the change in cash will be our bottom line. Never we’re going to recalculate this But it’s nice to know where we are ending up at. So this is kind of like even though it’s at the top of our worksheet, that’s where we want to end up by finding a home for everything else. So now we’re going to take a look at the adjustments to reconcile net income to net cash provided by operating activities. So these are going to be those types of things that we look at the income statement, and we’re going to say that these are non cash activities, meaning income is calculated as revenue minus expenses. And the cash flow.

If we were on a cash basis, we’re looking for those things that are on the income statement, which are not cash related. One of those things is always going to be depreciation. So we’ll say depreciation is not cash related. Now, again, when we when we do that we’re kind of going away from our normal setup here, which is that we’re trying to find a home for all of these items, all of these differences. And if I start going back to the income statement again, and pulling up information from the income statement without recognizing how it is related to a change in balance sheet accounts, then I’m not going to be able to reconcile again. So how can we think of the depreciation in terms of a change in these balance sheet accounts? Well, it should be the change in accumulated depreciation which started at 95,000 and went up to 110,007 50. The difference being 15,007 50. You would think that that then would be our change in depreciation that we would have to deal with here. Why? Big and notice the depreciation would do what you would think we would say that 10510 4500 we would have to add back the depreciation. Why would we add back the depreciation because it’s not a cash related activity. It’s included in this net income, but it brought down net income and we didn’t have any cash flow.

Therefore it should be increased if we’re going back to if we’re going from net income to a cash basis. If we’re starting at net income which is too low by this non cash related thing. Then we need to add it back in So we’re going to add back in 15,007 50. Now there’s gonna be a problem here. And that problem is that this, this 15,007 50 is not what’s on the income statement, because if I check this, I’d go back to the income statement and say, Hmm, the income statement is here, depreciation is 38,600, that doesn’t represent the change that I’m seeing. But if I pick up this 38,600, right now, without recognizing how it fits into this change, then I’m never going to get to a point of reconciling, I’m not gonna be able to figure out what the difference is. So what I’m going to do here is start with this 15,007 50. We’re just going to put that there and say, that’s where we’re going to start. And I’m going to recognize that we’re gonna have to adjust something, what are we going to have to adjust, we’re probably going to have to adjust that there was a sale of equipment or something like that. So we could do that. Now. I could, what I don’t want to do is put in depreciation and not reconcile the difference. Not get to this 15,007 50 I could either leave it here now, which is what we’re going to do and come back to it later.

And figure out how to break that out late at a later time when we do those adjustments. That’s what I recommend, because that’ll be easier for us to figure out all these other homes, get in balance, and then make the adjustments we need. Or we can go through it now, and and figure out what’s the difference between what’s on the income statement. And here, it’s probably a sale or disposal of equipment or multiple pieces of equipment. And then we’ll have to break this number out between multiple components. Now to do that, it’s going to be very, it’s going to be a little complex, because there might be a loan involved, there might be other things involved, which we don’t have yet laid out here on our statement of cash flows. That’s, that’s another reason why I would recommend first finding a home for these, the most likely home and then recognize and say, I’m gonna have to fix that I may have to break that out. Rather than just putting the numbers here that are Correct for depreciation, but do not represent this change over here on our worksheet, and therefore it will not end up with the change in cash.

So we need to make sure that we’re representing the changes here so that we we end up with the right spot. So our goal now is we’re going to put this change here, and we’re going to recognize it’s wrong. And then we’re going to get to the end of this and say, it must have happened that we had a sale of equipment, and then we’ll go back and make the adjustments in a systematic type way. Now, the other thing that’s going to be an adjustment here, oftentimes, if we look at the income statement, is there’s often going to be a gain or loss in the sale of equipment here. Now that’s going to be another item that has affected net income, but that we don’t want to have on the operating section. So we don’t typically want to include the loss on the operating section. Because the cash that we received or on the sale of equipment is typically going to be in the investing activities. So again, we know that we’re going to take that loss out. But it’s another one of those components that we don’t have here, we don’t have as a change. And so we’re gonna have to make that adjustment. These two are probably related. The depreciation and the loss are probably related in some disposals of equipment, or some sales of equipment. And we’ll have to deal with those.

But it’ll be easier to deal with those at the end. So what I’m going to do now is recognize that there’s a loss on the sale, probably something that I’m going to have to go back to, and make an adjustment with, it’s probably going to be something that will involve the depreciation we will be adjusting at the same time, and possibly some other accounts like Mike alone, that we have to dealt with at the disposal. So what we’ll do now is just note that we’ll put this line item here, remind ourselves that we’re going to go back we’re not going to put the amount here now, because I don’t know exactly how it represents these changes. I don’t know exactly how it ties out to these changes. I know it has something to do with this. Thousand 750 not matching what’s on the income statement for depreciation accumulated depreciation versus depreciation expense, but we don’t know exactly what that is. And it’s probably a little bit more complicated and affecting more components of the cash flow than we have laid out right now. So it would be easier for us to lay out all the components, and then break out this change to its component pieces by looking at the journal entry in the activity.