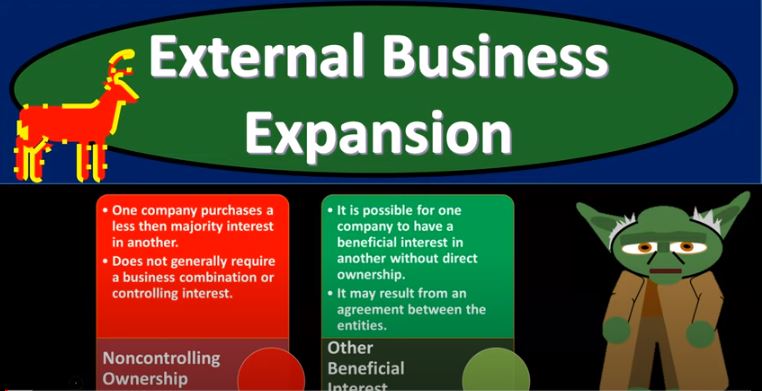 This presentation we’re going to take a closer look at external business expansion, which includes things like mergers and business combinations, get ready to act, because it’s time to account with advanced financial accounting. Before we move into the external expansion, you want to give a review and keep your mind on what our focus is we’re talking about a business that is expanding. When we think of it about expansion, we can break that expansion into internal and external expansion. So we have a business expanding into new areas do segments, we can think of it as an internal or external expansion. In a prior presentation, we talked a little bit more on the internal expansion, in which case you might have a situation where a parent creates a subsidiary or a parent basically just creates another division possibly, and expands in that format. Now we’re going to be going to the external expansion, in which case we’re talking about two entities. So we have two separate legal entities that in some or two separate entities in some case in some way, shape reform are coming together. So now we’re going to have an expansion where we have an external expansion. So if we’re thinking of thinking about this, from the from the standpoint of one company, we’re thinking about ourselves as one company and we are expanding, then we’re thinking about the expansion externally, that we are going to be combining in some way shape or form with another company. Now, the format and form in which that combination can take place can be various we can have various forms of that combination, it could result in a parent subsidiary type of relationship, or it could result in the parent basically consuming that another company and bringing them into the overarching parent company.

So let’s talk more about that’s what we’re focusing in on here, that type of external expansion with two separate entities that are somehow coming together. So we have the term business combination. So when you think about the term business combinations, you’re typically thinking of the external kind of expansion so business combinations, acquiring or company binding with other companies resulting in new areas of product and or new locations. That’s the concept of business combinations happens when an acquiring organization obtains control of one or more businesses. So that’s going to be a key term, of course, when we talk about business combinations is this concept of controls, especially if we have separate legal entities. Obviously, if one entity is consumed by the other, and is now part of the one legal entity, then there’s clearly a control situation because that that other legal entity that was separate at one point is now legally consumed or owned by one entity, no question about control. Typically, in that type of situation. Where do we have questions about control? When we have two entities that are still separate legal entities, they’re still separate corporations. And again, I would think about them as kind of like people in some ways that in that the corporations have have rights or some kind of obligations that are granted to them that are typically only granted to people with Such as the right to own assets and be obligated by liabilities and therefore have to pay taxes separately and file their own tax returns and whatnot. So if you talk about these separate entities that have kind of a separate legal structure, separate entities responsibilities that almost are assigned to people and, and one is has control over the other, that’s where you get the more complex type of relationship, especially if the control is not complete control. In other words, if you’re talking about a situation where one entity doesn’t own 100% of the stock of the other, but has a controlling interest, which generally would be over the 50%.

So control the ability direct to direct policies and management. So what is control? That’s the ability so if one company obviously when we’re thinking about the concept of control, you can think about it from an investment standpoint, if you have ownership and stocks of a corporation, you are typically are technically the owner. Have that Corporation however, you exercise very little control over it if the percentage of ownership is very small with regards to the corporation however, as your percentage ownership goes up, then you are you have more exercise of control or you have more control over what the corporation does how, because you have control over the management in some cases in terms of the voting for you know, the management of the organization, if you have over 50% control, then then you have control over in essence management and have a lot of influence over over the corporation in essence, right? So control methods. So the typical kind of concept of control, what does control mean? It typically you can think of it generally almost most of the time or almost all the time is having over 50% of the outstanding voting stock. So, again, if you’re talking about a an entity, if you’re talking about two entities and one entity basically consumes the other one, then and they’re no longer two separate legal entities, then there’s no quick Question of control when there’s they’ve been merged together? And there’s no real question. If you’re talking about two separate legal entities, still, they’re two separate corporations, then the concept is 51 50% over 50%. So in other words in your mind, when does when does control being hit, it hits that 51% and above of the outstanding stock.

So if one company owns 51%, of the stock of another company, you would think unless there’s some other extraneous circumstances that they would have a controlling interest in, they could have less than that in some cases where there might be some other reasons why they have a controlling interest, but your mind is basically saying, Yeah, anything above 51% of one entity owning the outstanding stock of another would mean they have controlling interest, because obviously they have the voting power to vote in whoever they want in terms of the management of the organization, the management, having the power to control the policies of the organization. So over 51% You’re thinking control. That means that if they own 80%, clearly, they’re going to be in a control situation. And obviously, if they own 100% control situation, and obviously, if one company was consumed by the other, and they’re no longer separate legal entities, then that kind of combination would mean that one company obviously has control over what used to be a separate legal entity use of contractual agreements and financial arrangements. So it is possible note to have a situation where you have less than 50% if there’s some kind of contractual arrangement or something like that, that basically gives the parent company or the one company a controlling interest, even though they don’t have the 51% which would typically be the case for controlling interest. So if you have a question on it in terms of a test question, is it possible to have less than 50% and still have a controlling interest? Yes, if you have some other kind of arrangement split that gives you that that basically controlling power through some kind of agreements or finding nancial agreements or arrangements, but the general rule would be over the 51%. Okay, a merger, two companies are merged into a single entity. So when you think about the type of business combination, you were typically thinking about basically a merger or a controlling owner or a controlling ownership type of situation. So a merger would basically mean you had two separate entities, they’ve merged together. In essence, one entity consumed the other entity, they were two entities they’ve been consumed, the other entity has basically been dissolved or dissolved into the one entity so that a larger entity typically has consumed in essence, the smaller entity generally with regards to a merger, so two companies are merged into a single entity.

So, from an accounting standpoint, we’re thinking, alright, what are we going to do with this? One company is related to the other company, what do we have to do with it? Well, if there’s a controlling interest in it, then typically, you’re going to have to do that combined financial statements for it. And that’s usually going to happen when there’s 51 or more percent of the stock owned by the other company. If less than that, then typically you’re going to have to account for it in some other way, and you’re not going to have that The financial statements be combined in that same way and then we can have an other beneficial interest, it is possible for one company to have a beneficial interest in another without direct ownership, it may result from an agreement between the entities. So in other words, we might have some kind of contractual agreement where we have some type of beneficial interest again with a two entities being related in some way shape or form, but not through direct ownership. In other words, not through the ownership of the of the stock, a direct equity interest, but possibly through some type of contractual agreement.