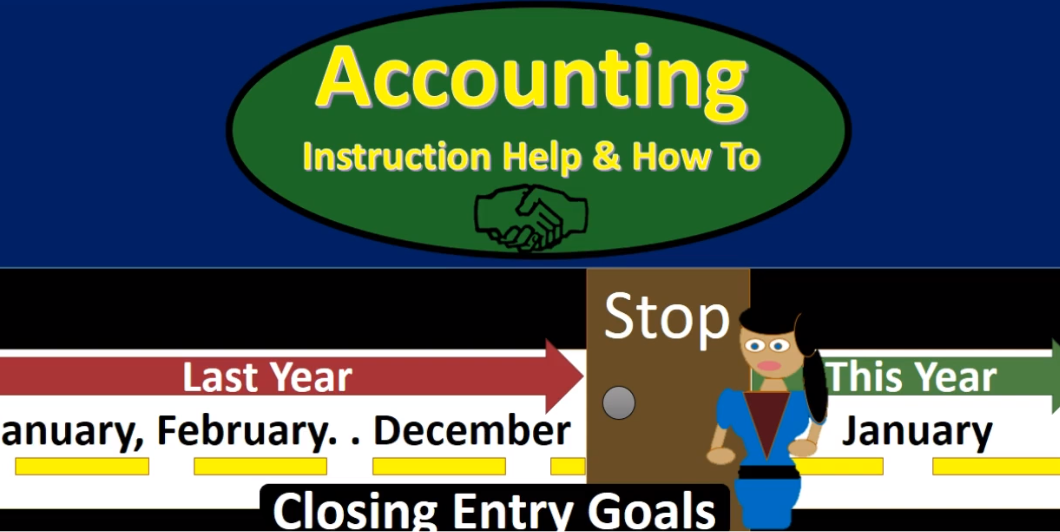 Hello in this lecture we’re going to talk about the objectives of the closing process the closing process will happen after the financial statements have been created. So we will have done the journal entries where we will have compiled those journal entries into a trial balance, and then we will have made the financial statements. And then as of the end of the period in this case, we’re going to say as of December, when we move into the next time period, January, what we need to do is close out some of the temporary accounts those accounts including the income statement and the draws account so that we can start the new period from start in a similar way as if we were trying to see how many miles we could drive say in a month. If we wanted to Vince in December, and then see how many miles we’re going to drive in January of next year.

Then we would have to reset the odometer. That’s what we’re doing here. We’re basically resetting the odometer of the odometer in the case of the financial statements being the income statement accounts that draws accounts, those temporary accounts. So if we look at the adjusted trial balance as of the end of the time, Period enter the time period is December 31. In this case, we see that the accounts up top the assets, the liabilities and the capital accounts. Those are accounts that are going to be permanent accounts. And then everything from draws the revenue and the expenses. Those are going to be the temporary accounts. These accounts down here from draws revenue and expenses. Those are the ones that we need to make zero so as of January we need to make those zero we need to reset the odometer on those accounts. 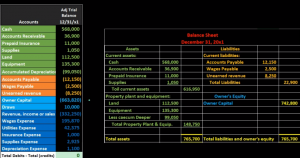 We can also think of that in terms of the balance sheet remember the balance sheet is as of a point in time meaning of those are the permanent accounts so we can see all the assets from the trial balance are listed here on the balance sheet, as well as the liabilities. Then in the equity section, we only have this one account called owner’s capital. It looks like this owner’s capital over here, but it’s not the same number. Why? Because this owner’s capital represents the amount as of a point in time. This owner’s capital represents actually only the B Gaining balance of the capital account, not including the timing stuff, which would include draws and revenue and expenses. Therefore, in essence, what we’re saying is all these blue accounts, that’s what that number is that 740 to 800 is including all these numbers. That’s where we’re at as of the point in time combining all those numbers together. And everything that is from draws revenue expenses down, are temporary, that need to be closed out for the temporary accounts and are already part of the ending balance sheet account.

We can also see that in terms of the financial statements, so we can see that the net income on the trial balance is the credit of the revenue minus the expenses, the 88 980. That’s represented on the income statement. This income statement is a temporary account that’s like our odometer type account that we’re going to reset to zero, the entire income statement as of January 1, first day of next month, will be zero. There won’t be anything there because we haven’t started just like when we start a new Race and we’re trying to see how many miles we’re going to go. It’s starting at zero as of the next time period, that 889 ad is also on the statement of equity. The statement of equity is, in essence, a temporary account as well meaning we have the beginning capital, that’s the permanent part of it.

That was from last time period, plus what has happened during this time period, meaning net income. And then we’ve got that draws the two temporary items, and of course, net income clumping together all the income statement accounts for revenue and expenses. That’s how we’re going to get to our Indian capital number once again, as of the point in time, that ending capital number is what will be on the balance sheet. Everything else is the temporary section. That’s what we need to close out. Remember that 742 800 same number that we just talked about on the balance sheet. So we are resetting the, how are we going to do that? Well, on the left hand side, this is our adjusted trial balance that we use to make the financial statements we need to make It looks like on the right hand side like it does here on the right hand side.

So this is the adjusted trial balance as of 1231. This is what we have as of January 1 of next year, we can also think of it as the post closing trial balance. So right after we closed everything out, we’d have a trial balance, it would look like this. Notice everything that’s the same, all the assets are the same permanent accounts, all the liabilities are the same permanent accounts. And then the equity is the capital is a lot larger here on after we’ve closed it. event it is over here. That’s because of course, we took all these numbers, we crunched them together, and we put them over here we can see that two different ways we can calculate that two different ways. We can say how did we get to this 740 to 800. We can say well, we’re going to take the credit, I’m going to do it in plus and minus relevant debits and credits.

We’re going to say it’s the amount of the capital minus the draws plus the revenue, minus the expense minus the expense minus the expense minus expense minus the expenses that will give us the amount of the 742 eight 100 that’s what we need in the capital account represented in the equity section. After we close out everything else, in essence, we closed out all the temporary accounts, and plugged all that numbers, all those numbers into the one number of owner’s capital. We can also calculate that this way we can say, Well, if that’s the only number in the equity section, and assets minus liabilities equals equity, we can say, hey, let’s add up all the assets, adding up all the assets here cash on down, subtracting out the Contra assets of the accumulated depreciation, we got to make sure to do that. And then we’re gonna subtract out all the liabilities. And that will then give us the same number that 740 to 800. 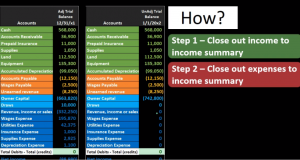 So again, we can think of those in two different ways. And of course, that 740 to 800 we have seen before That’s the number that was on our balance sheet as of the end of 1231. And of course, we also saw that number on the statement of equity, the ending number being the point in time, the activity and the equity Section being temporary accounts. The question then is how are we going to get here? In terms of just logistics, the journal entries? What are the journal entries kind of look like? How do we get from something that looks like this to something that looks like that? Well, we’re going to do a four step process. Traditionally, we’re going to say First, we’re going to step one, close out income to the income summary, we’ll have a journal entry to do that. And step two, we’re going to close out the expenses to an income summary, which is a new clearing account, we’ll talk about Step three is going to be to close out the income summary to the capital account and step four will be to close out draws to the capital account. In essence, what we’re doing is making a journal entry. We could make one large journal entry basically closing out this trial balance to the capital account. However, it’s traditional to do in this kind of four step process, and we’ll discuss why next time.