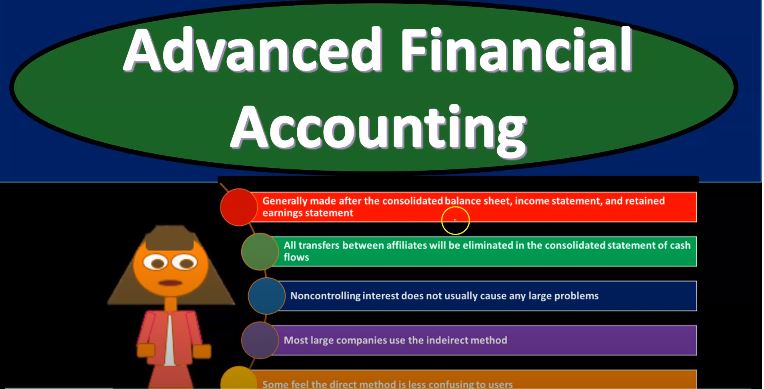 So sometimes regulations will actually require then the if you use the direct method to all Provide a reconciliation, which means you’re required to do two statements, which is kind of more work. So if you’re only going to do one, you know, oftentimes people will will tend towards the indirect method, which tends to have that reconciliation process even though many people even such as myself do believe that the direct method is going to be easier for users to kind of identify with and understand. So the operating activities section is the only one affected by the use of an indirect method or direct method. So when we think about the two methods direct or indirect, we it’s the same process for a single entity in that these two options will only be adjusting the first section, which is the operating section, no effect then on the investment or financing section, indirect method operating activities section we’ll start with net income, then adjust for items affecting cash and net income to get to cash provided by operating activities. So obviously you’re starting kind of like from the endpoint because really worked. We’re starting from net income and backing into the cash from operations. But as we do so, so that reverse process again, it’s tough to explain to someone cash transactions or exactly what is happening here. When you look at that statement and your in your, in your explaining that this is basically kind of like the income statement or the net income on a cash flow, but you’re looking at balance sheet accounts, like accounts receivable, accounts payable, and you’re backing into it. So that’s, that’s why it’s a little bit more difficult to explain, even though it has that nice reconciliation process, the direct method, the operating activities section will show the actual cash flows, meaning you’re basically taking the income statement in some sense, and reconstructing it basically on a cash basis, which again, if you were to explain that to somebody would be a little bit more straightforward, typically. So it looks something like this. If we had cash flows, cash flows from operating, this is the indirect method. Then we typically have the consolidated net income and this is what’s slightly different. Notice We’re taking here the consolidated net income. And then we’re taking out the non cash items, the depreciation, amortization, and then the changes in operating assets and liabilities, which includes the change in accounts payable, changing inventory change, and accounts receivable, I should say, and then accounts payable wages, and so on.

Note, this is kind of a worksheet here. So I have change instead of increase or decrease. So we could say increase, or D, this would be a decrease, decrease, decrease, increase. But those are going to be these and notice again, the indirect method as this is, if you were to explain this to someone you could say, yeah, we’re rate we’re taking net income basically consolidated net income and transferring that kind of into a cash basis method. And the reason people think that’s a little bit more confusing is because you’re you’re basically saying this is kind of like the income statement, and this is like the income statement number on a cash basis. But then how did you get there? Well, I backed into it by taking out all these balance sheet accounts, which records which represent the change in the income statement account. You see Right. And if you’re talking to someone who’s not an accountant, I mean, that’s still kind of confused, you kind of grasp that. But it’s still, you know, tougher to kind of visualize. But then we have the cash flows from investing activities, cash flow from financing activities, net increase in cash like we normally would. And the two, one slight difference here too, is that we have the dividends paid to parent company shareholders here and dividends paid to the non controlling shareholders. So we’ll actually put the statement of cash flows together, recommend going through that and working them out in Excel, or we’ll do the problem in OneNote, as well as you check them out. And then we have the net increase in cash and we kept cash at the beginning of the year, and then and then cash at the end of the year, which would, of course, to help to the balance sheet. Now, if we had the indirect method, then I mean, the direct method is now being the direct method. The only thing that changes is the cash flows from the operating activities as it would with one entity, no change to the cash flows from investing or financing activities. And notice again, this is a little bit more straightforward where you’re kind of taking The income statement and transferring it to, you know, straightforward.

Cash Flow on a cash basis. So cash received from customers like revenue, cash paid to suppliers kind of like the expenses on a cash basis employees cash paid to employees and so on. And then you get to the net income. So to me, obviously, if you were to explain that to somebody, you’d be saying, Yeah, we’re taking we’re basically taking kind of like the income statement and changing it, you know, basically to a cash flow statement for the operating activities. That to me is more intuitive. But you don’t have the notice. You don’t have a reconciliation here like you do on the indirect method. I don’t have anything tying this directly out to the net income number. Because we’ve reconverted line by line, we don’t have the reconciliation. So that’s why oftentimes, sometimes regulations are more likely to say, if you have the direct method, if you use the direct method, we also want to see that reconciliation, which leads many people to just use the indirect method of course, because that would be less work typically and less, less work to do So but then you could see a reconciliation, which would would basically be the indirect method. In this case, the consolidated net income now starting that net income, and then backing out the information basically backing out the changes in the balance sheet accounts, just like we did on the indirect method, and that would give you the same number here. So that would be a reconciling item, or reconciling a reconciliation of the consolidated net income to net cash provided by the operating activities. So again, I would recommend to take a look at these in our practice problems as we just basically go through the construction of them.