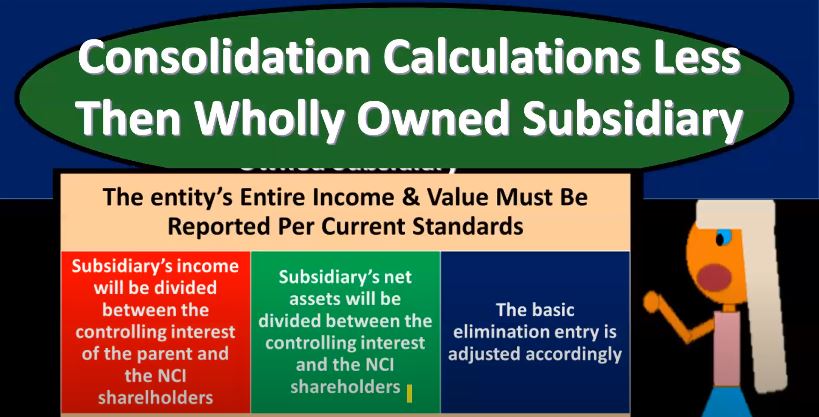 They want to see the entire thing on the subsidiary which kind of makes sense because you would say hey, the the parent company has control of Over the allocation of the assets and therefore, they have control over kind of a performance to some degree, even though again upon liquidation, there would be the minority interest for for who has rights to you know the net assets. So in any case, the income statement then we want to see the entire income statement for the consolidation, including the majority minority and majority part of the subsidiaries. Subsidiaries income will be divided between the controlling interest and and the parent and the non controlling interest for the shareholders. So, we’re gonna have a similar type of situation.

We saw in the equity section of the balance sheet, we want to show the income, but then we also kind of want to show those non controlling interest format within it. So how can we have kind of the best of both worlds to show basically income and expenses fully consolidated 100% consolidated and then also show this non controlling interest for the non controlling shareholders. subsidiaries that net assets will be divided between the controlling interest and the non controlling interest for the shareholders. The basic elimination entry is adjusted accordingly. So what we’re going to do, we started off thinking about the adjusting entry. Obviously, if you have a fully owned subsidiary, the elimination entries are going to be easier because then you have a fully owned subsidiary. So we would just do those elimination type of entries. Now we got to adjust the elimination entries to account for these non controlling interest is meaning we’re gonna have these two new accounts that will be in place one on the balance sheet in the equity section for the non controlling interest in one on the income statement acting kind of like an expense. So this will make a lot more sense when we do actual problems. So when we work problems, this will make more sense, but this is just an example here of an adjustment. Now note the this is a long adjusting entry. We’re not putting the debits on top and the credits on the bottom. This is how I would think about constructing it As we will do in practice problems, we have the parent company, we have the subsidiary, we have the consolidation, adding the parent and subsidiary trial balances up. Once that is the case, then as we saw in the past, we would remove the investment in s. So that’s going to be eliminated. We’ve got the, the basically equity section four s that we’re going to remove. In other words, the 183, the 148, the 36. So the 183, the 148, the 36 been removed here.

So this is the non controlling interest that acts kind of like an expense. In other words, if you were to put this kind of like up here, you know, you get down to the net income, it’s going to be decreasing this consideration, consolidated net income. And then you’re going to get to the bottom line here, which is the consolidated net income to the controlling interest. So basically, you got the two line items, you’re gonna say, Hey, this is this is the performance up top this line represents how the company performed given the fact that P basically kind of has control over the net assets of the company, right? The assets minus liability, even though they don’t have you know, the right like upon liquidation, you could say to the non controlling interest, right, they have kind of kind of control over it. But in this is the performance the income statement, how did they do over time And so you can kind of attribute that performance to how well p ultimately allocated their resources, net assets. And then there’s this one line item that says of those consolidated net income. This is part of a net income that’s not attributable part of net income that is increasing the equity section representing assets minus liabilities, that is not attributable to, to the the controlling interest the parent. So that means that on the on the balance sheet assets, liabilities equity, now we’ve got this non controlling in interest here, representing this app component, assets minus liabilities, including total assets and liabilities for parent and subsidiaries. showing that this is what basically p as the parent has control over ultimately, and then there’s one line item showing what they don’t have claim to and you can think about that basically in case of liquidation. Of course, they wouldn’t have claimed to that 36 200 this income statement showing how well the consolidated entity performed given the allocation of the net assets, which basically are in control of by the parent there, and then the portion of that net income that has been received this one line item that would be allocated into the subsidiary and then the statement of retained earnings down below.