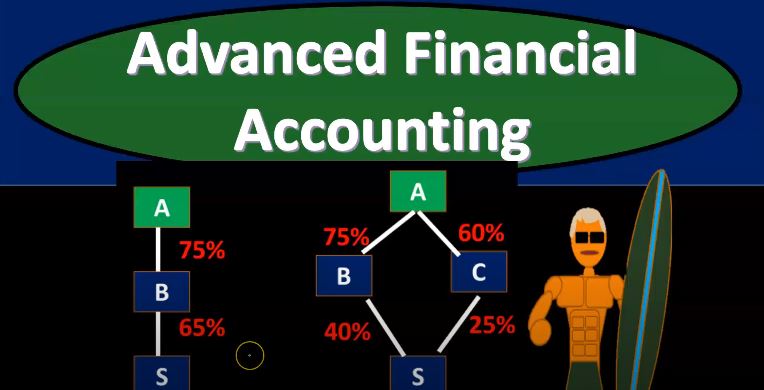 Advanced financial accounting. In this presentation we’re going to talk about the concepts of direct and indirect control. If you’re ready to account with advanced financial accounting, we want to consider these concepts within the context of financial statements and consolidation. So you’ll recall that when we have consolidated financial statements, the idea is to put two financial statements together when one company has basically control over another company that being defined typically by having more than 51% interest because if you have more than 51%, then you have basically a voting share for you to vote on anything, then of course, you would win the vote at that point in time. So let’s consider then direct control and indirect control direct control when one company has a majority of another company’s stock common stock. So that would be a situation where you got a and b, one company has a majority interest over 51% control is pretty easy to see at that point. When you start to get into indirect control. This can get more complicated things can get more confusing here. So indirect control, one company’s common stock is owned by one or more other companies that are under common control. So this can get a lot more detailed structure in terms of what is going to constitute control. So for example, if we have direct control, then you have just simply a parent subsidiary type of relationship. And, you know, the parent has more than 51% of the subsidiary, interest common stock. So and that could happen if we have to, we could still have a little bit more complexity here, where we have two subsidiaries, right. But they’re both going to be consolidated in this case, because there’s 75% over 51% direct control is parent over as one direct control over as to here because it’s over the 51%. So both of these cases would be direct control.

And again, you can think of a lot more you know, structures you get this thing starts to get somewhat complex on how this how this could be set up. exercise control ability, that’s really what we’re relying on when we’re looking at these structures. We’re saying hey, can they exercise their control if they have over 51% you would think that would be the case, but there could be situations where they look like they have a controlling structure, but there may be reasons why they cannot exercise control and if they cannot exercise the control, then the consolidation would typically not be used. So the consolidation is not used if the subsidiary is involved in a banker’s ruoxi or reorganization. Why? Because now there’s there’s another entity that’s now going to be involved in governing the bankruptcy and or reorganization process. And therefore that, you know, control isn’t basically in the hands possibly, of the parent company. During that kind of process, a foreign country restricts the remittance of profits to the parent company. So if you know the company’s in a foreign company, then there’s could be restrictions that then restrict the control the ability to exercise control, and therefore, you would think that consolidation under those types of restrictions may not be necessary or the proper format, fiscal period difference between parent and subsidiary. So once you start thinking about, Okay, now we’re going to do a consolidation, right? Well, you can start to think about problems with the consolidation, you could say, okay, some of the normal problems you’re going to have, you’re going to say, Well, what if they don’t own 100%? What about these complex kind of structures? You know, how do you how would exactly are you going to be combining though? Should you combine the entire amounts? Or should you be combining just the controlling interest? If there’s a less than 100% interest, then you also have questions about what would if the the the fiscal period is different. So obviously, if they all had a calendar year in January to December, then no problem in that situation for for this particular problem. You can put them all together. But what if one of them has a different year end fiscal year? And how can we account for that well, will will not stop the consolidation, although it can complicate the process, we’re still going to basically try to do the consolidation in accordance with the regulations in that situation. The subsidiary is generally but not always change to the parent fiscal period.

So the easiest thing to do typically would say, Okay, now we’ve got, you know, a parent subsidiary relationship, we have a relationship in which we should probably be reporting consolidated financial statements. But let’s Why don’t we just adjust the subsidiaries books to be on the same fiscal period As the parent and make this as easy as possible that would simplify the process. That would be the logical thing to do. But if that’s not done for whatever reason, maybe we still want, you know, you still want to report the financial statements for the subsidiaries on a different period, it might be beneficial to do so then if not, the data of the subsidiary can be adjusted each period to line up with the basis of the parents fiscal period. So basically, then you’d have to, you know, run almost the books, basically, as if you had two different fiscal periods closing out the books, you know, you know, on to fiscal period accounts, that would be a more difficult thing to do. But you can, you know, obviously adjust the data in order to accommodate that kind of scenario.