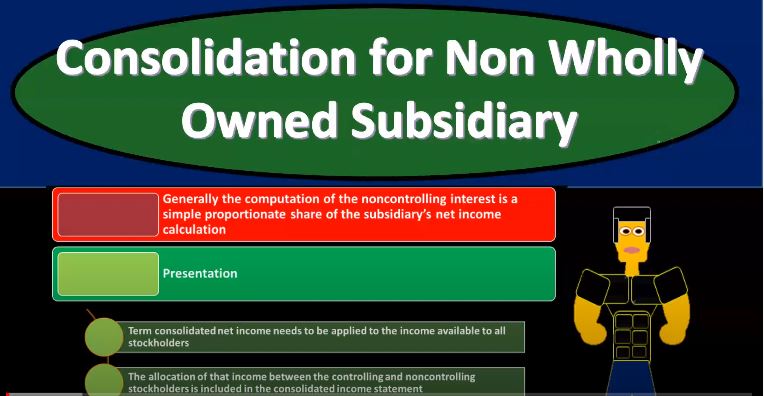 But it was chosen, of course, to go with a full consolidation. So that’s what we’re going to be using now why would generally accepted accounting principles want the full consolidation? Well, if you do the full consolidation, you can kind of think of it as you know, the parent company has control over the assets and liabilities of the subsidiary, even though they don’t have claim to the net assets really. So most of the people that are looking at the consolidated financial statements have an interest in the parent. So they’re concerned about the parent company and so they want to know You know what assets and liabilities the parent has control over? And the performance? If you look at the income statement, how did the parent company do? Because ultimately, the buck stops them, right? They’re the latter they have they have the ultimate say over, you know, what’s going to happen, at least at the top level. So so they want to know, what was the performance that was done on the total assets minus liabilities that you ultimately have control over. So if you have the full consolidation, that will show that and then if you can also show that in just one line item, the proportion of the assets and the proportion of the performance, the proportion of the equity in other words, that represents the net assets that are not going to have claimed to by the parent. In other words, if you were to liquidate, that’s the portion that would go to the subsidiary, I believe it was thought then that that’s going to be a better representation than kind of eliminating the like 10% or the non controlling interest and just not showing that in the consolidate because it Did this over here, if you removed the 10% didn’t show that 10% in the consolidation, then you’re not really showing 10% that although the parent doesn’t have claim to it, they do have control over it, in essence on how to use those because ultimately they have the voting power to do so. So that’s, you know, some thoughts in terms of why you’re going to basically to use this for consolidation over here.

Full consolidation required by generally accepted accounting principles gap to new accounts are used in the consolidated statements. So we got the two new accounts, this one is going to be the NCI non controlling interest. In other words, in net income of the subsidiary, acts like an expense in the consolidated income statement reports income that doesn’t belong to us. So in other words, we’re going to run the income statement combining income together, meaning parent company subsidiary company, the full subsidiary 100%, we’re going to put that together. Then at the bottom of the income statement, we’re going to say By the way, here’s just one line item represent the portion of net income In our case, we’re going to say 10% of net income, the non controlling interest that doesn’t belong to the parent, that’s going to be part of equity. That’s going to be part of the the subsidiaries equity there. So it’ll basically act like an expense account in our in our little worksheet. And then we’re gonna have a non controlling interest in net assets of the subsidiary, equity of unrelated owners, net assets on your balance sheet not belong in to us. So in other words, we’re going to say, here’s the assets. Here’s the liabilities. So you can see assets minus liabilities, you can see the equity section as a total that basically says, hey, look, this is what we the parent company basically have control over. We can we can tell the, you know, people ultimately what to do with the net assets here. And this income statement is obviously the performance of those net assets that we have control over. And then we’re also going to add this account saying even though we have control over these net assets, we don’t have claim to them. In other words, if we were to liquidate, for example, though, that’s the portion in our in our example 10% that would be go into the non controlling interest. So we’re going to be adding these two accounts in the process, where to put the non controlling interest, net assets must report in equity. So we’re typically going to be putting that in equity and prior to that, there was some kind of confusion. So, so, note that should say note, the old rules may have allowed it to be reported in the mezzanine or in between place between liabilities and equity. So you might you might see an older financial statements kind of like a limbo space like a new category in there. But in essence, you’re thinking of it as as basically a breakout within the equity section.

So you got your equity section, and then you’ve got this non controlling interest that will be in there as well. computation and presentation of income to the non controlling interest. Generally, the computation of the non controlling interest is a simple proportionate share of the subsidiaries. Net Income calculation. So you might say, uh, well, that sounds all well and good. But how do we actually get that number that sounds kind of a little bit complex. But it’s not that bad usually, because obviously, if you take the net income number of the subsidiary and the parent, if the parent has 90%, controlling interest, and 90% of it would be apparent 10% would be the non controlling interest. So you would just take the 10%. So usually, it’s a proportional calculation, not too difficult presentation. term consolidation, net income needs to be applied to the income available to all stockholders, and the allocation of that income between the controlling and non controlling stockholders is included in the consolidated income statement. So what you’re going to have then is basically the consolidated income statement, you got revenue minus expenses, then you got your net income there, and then your and then you’re going to have another basically line that’s gonna say, hey, and this is the this is the amount of net income that basically isn’t isn’t The majority shareholders don’t have claim to. In other words, it’s the minority portion. Now I know this whole process may seem a little bit abstract as we go through this. Now how do we get it to be less abstract, we’ll work problems. So as we go through the practice problems, this this whole process will become a lot more concrete.